Today's Iron Vault article sees us delve into the archives at our appearance record holders, looking at the player who currently occupies number three.

Matt Sparrow was already comfortably in that position when he departed the club for Brighton & Hove Albion in August 2010, but he'd come back to cement that place further just three years later for a final campaign-and-a-half.

Representing the club through 13 different seasons, Sparrow fell 24 games short of second place and can draw on a few suspensions, a misdemeanour and a couple of injuries as to why he didn't overhaul Paul Longden.

The Wembley-born midfielder had the luxury of playing at both the new and old stadiums for the claret and blue side, with the first coming shortly after he formally signed for the club at 16-years-old. West Bromwich Albion were the opponents in between the Twin Towers in the FA Youth Alliance Final, but it was to be a visit to the new venue in 2009 which would be most significant to Scunthorpe's history - and I don't need to spell out what happened in this article!

Sparrow made his debut in the League Cup in the goalless draw away at Huddersfield Town, coming on as a 64th minute substitute for the already used substitute Wayne Graves, who had himself replaced Darryn Stamp in the first half. It was to be the first of 437 appearances for the side.

That game came in mid-August and it was a matter of five weeks later when he made his full league debut in a 2-1 home defeat to ten-man Bristol City. The score was 0-0 at the interval when the Robins lost Paul Mortimer to a second caution and, despite Steve Guinan putting the hosts ahead, City would hit back and steal the points. His second and final start of the season would come at Stoke a couple of weeks later, settling for substitute appearances there on in.

The following season would see a reversal of that, with nine of his 11 league appearances in 2000-01 being from the beginning, but it was still just a season in which he made 13 appearances, although he did score his first professional goals - reaching four in total. He'd been waiting 17 games for his maiden strike and two would come along in the same game. Torquay United were the victims on their own back yard and 2-0 was the final score. Sparrow was in dreamland.

2001-02 would be his first real stint in the side and, despite his compaign not beginning until November, he managed 20 league starts. This was also despite the first of his setbacks in not gaining more Iron appearances when he was given a nine-month jail sentence for an incident outside Club 2000, along with three other men.

It was a life lesson well needed, and his return to action in 2002-03 would be see him surge on his appearances for the club, making 49 in that season, 50 in the next, 49 in the following and 45 in 2005-06. The faith from manager Brian Laws had seen Sparrow go from a bit-part player in his younger days to a stalwart in the team and seen his tally rise from a mere 51 across three seasons, to a total of 244 across seven. That did, of course include play-off heartache in 2002-03, a near Football League relegation in 2003-04 and a promotion to League One twelve months later. Never a dull moment. 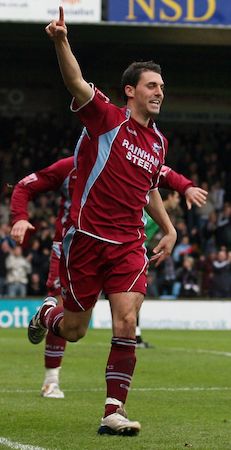 While the final four seasons of his first stint at the club saw his league starts stammer in the 20s, Sparrow was still appearing for more than half the season and played a strong role in 2006-07's title winning promotion to the Championship which meant he was able to realise his dream of playing in the second tier for the first time in 2007-08. He'd make 24 starts in that campaign and it wouldn't be the last set either.

In fact, he was the advocate of it being a reality once more, obviously netting a brace against Millwall in the League One play-off final at the end of the following season to help the side win promotion back at the first attempt. He would also score "that" goal in 2009-10, which enabled United to have one final campaign in the top flight - the late equaliser against Reading to preserve the second tier status.

He wouldn't remain at the club, though, signing for Brighton & Hove Albion of League One in August 2010, just six days before the commencement of the new season. He'd enjoy a whirlwind start, netting twice on his debut to win 2-1 at Swindon before he was sent off three days later at Northampton. He'd be back.

Indeed his return coincided with Scunthorpe's plummet back to League Two and Sparrow would return to help United to one more promotion, arriving on a free transfer from Crawley Town.

He would net on his second debut, opening the scoring on the opening day of the season at home to Mansfield Town, with the goal one of three during the campaign. His last strike in the campaign would just about clinch promotion, as the side beat Oxford United 1-0 - the 28th game without defeat for the side since Russ Wilcox took charge of the team.

Sparrow would be absent for the end of Laws' third tenure and the beginning of Wilcox's. He was substituted on at Blundell Park in the FA Cup, replacing Etienne Esajas, but had to be replaced five minutes later after he sustained an injury. His next appearance for the club wouldn't be until February.

2014-15 would be his final campaign at the club, with his final league start coming in the home defeat to Doncaster Rovers. His final three appearances would all be in the FA Cup, with his penultimate showing seeing him come off the bench to be involved in the longest penalty shoot out in the competition's history.

From there he'd go on loan to Cheltenham Town before signing for Lincoln City ahead of the following season. He'd returned to the side in 2013 a club legend and departed the club for a second time, still a club legend.

There's no denying that Sparrow loved a tackle, but just how many cards did he pick up in his Iron career. We take a look at his disciplinary breakdown...