The Iron will travel to the DW Stadium this Saturday when they take on Wigan Athletic in Sky Bet League One (kick-off 3pm). 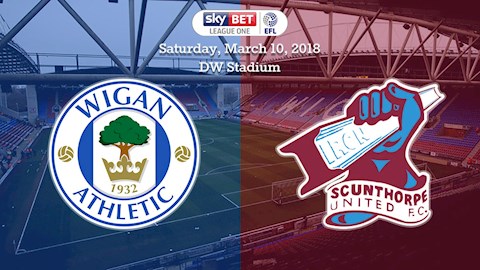 Two Oldham goals towards the end of the second-half meant that United were defeated 2-0 at Glanford Park last weekend.

Meanwhile, Wigan came from 2-0 down to draw against promotion rivals Blackburn Rovers thanks to goals from Will Grigg and Max Power. They sit in third position.

TEAM NEWS…
The Iron will assess Ivan Toney (groin) ahead of the match, after he trained with the squad on Tuesday.

However, manager Graham Alexander will be without Luke Williams, who tore the scar tissue that has formed since he was ruled out with a hamstring problem for seven months. He is expected to be out of action for a few weeks.

Jordan Clarke (hamstring) has returned to training but is not up to full speed, so he will not be returning just yet. Fellow right-back Marnick Vermijl (hamstring) will also not be involved.

Murray Wallace, who went off injured against Oldham, suffered from cramp around his hamstring area and is yet to train this week.

Striker Lee Novak still hasn’t trained with the squad and is expected to stay on the sidelines with a heel injury.

Kyle Wootton has returned to full training after a hamstring injury and featured in a reserve game on Monday.

Our full record is as follows:

ONE TO WATCH…
Wigan’s top scorer Nick Powell will be one player the Iron defence need to keep an eye on, having scored 12 league goals this campaign.

The attacking midfielder signed permanently for the Latics in 2016 from Manchester United.

He began his career at Crewe Alexandra, winning promotion from League Two via the play-offs in 2012, before earning a big move to Old Trafford.

The Iron drew 3-3 against Wigan Athletic at the DW Stadium on Saturday afternoon.

United didn’t get off to the best of starts when Wigan’s Chey Dunkley headed his side into the lead in the 13th minute, but Tom Hopper struck back just three minutes later with a wonderful looping header.

There was then late drama at the end of the first 45 minutes. Wigan retook the lead through Will Grigg, but another immediate response from Hopper drew the Iron level in stoppage time.

After an eventful first half, ex-Wigan loanee Ivan Toney gave the Iron the lead for the first time in the match with a powerful effort.

Wigan then made it 3-3 with four minutes left. Gary Roberts advanced on the left before his effort deflected into the back of the net.

Manager Graham Alexander made one change to the starting XI, which saw Toney replace Hakeeb Adelakun.

There was an early opportunity for the hosts inside the opening three minutes. Defender Cameron Burgess blocked a shot, with the rebound falling to Will Grigg, but the striker lashed his volley over the bar.

Ten minutes later, and Wigan had taken a 1-0 lead. Max Power’s corner was headed into the back of the net by defender Chey Dunkley.

The Iron then came extremely close to levelling the game up with a couple of chances. Hopper latched onto a throughball, lashing his first shot at goalkeeper Christian Walton, before striking the right post with the follow-up.

However, seconds later, Hopper did get his goal, equalising for the Iron. Funso Ojo lifted a beautiful ball over the Wigan defence and the forward ran onto it looping his header over Walton.

Goalkeeper Matt Gilks then made a smart stop to deny Nick Powell. The ball set up nicely for the attacking midfielder, who saw his shot deflect off Ojo and into Gilks’ hands.

Towards the end of the half, Grigg put the Latics back in front. A cross came in from the left and the striker’s attempt took a cruel deflection as it bounced into the bottom left corner, with Gilks wrong-footed.

Wigan were on the search for another goal before the interval. Space opened up for Michael Jacobs, whose long range effort was parried away by Gilks.

However, the Iron came back with another instant response when Hopper headed home his second equaliser of the match. Neal Bishop delivered a fantastic cross into the area, which Hopper expertly met with a header flying into the far corner.

Wigan came out firing after the break and came close to scoring if it wasn’t for Bishop. Jacobs got a connection on the ball from a corner, but Bishop cleared the ball off the line. That was closely followed by an effort from Powell, with the strike skipping wide.

Gilks was forced into a save in the 52nd minute. Jacobs made good progress on the left wing before sending a cross to the far post, but the goalkeeper made a great save to deny Power from close range.

The Iron then hit Wigan on the break and took a 3-2 lead. Great work from Hopper allowed Josh Morris to curl in a fantastic cross, which was headed onto the crossbar by Ryan Yates. The ball then landed to Toney, who controlled the ball and smashed it into the target.

In the 79th minute, the ball found its way to Grigg, but his shot went wide of the goal from inside the area.

With four minutes left to play, Wigan equalised to make 3-3 via another deflection. Substitute Roberts fired across goal and it took a deflection with the ball wickedly going into the back of the net.

United pushed forward late on and had a penalty shout denied when Toney was felled, while Yates was also brought down on the edge of the area but nothing was given.

Wigan Athletic have confirmed Iron fans can pay cash on the turnstile on Saturday, March 10th, with no price increase.

Tickets are now off sale from Glanford Park. 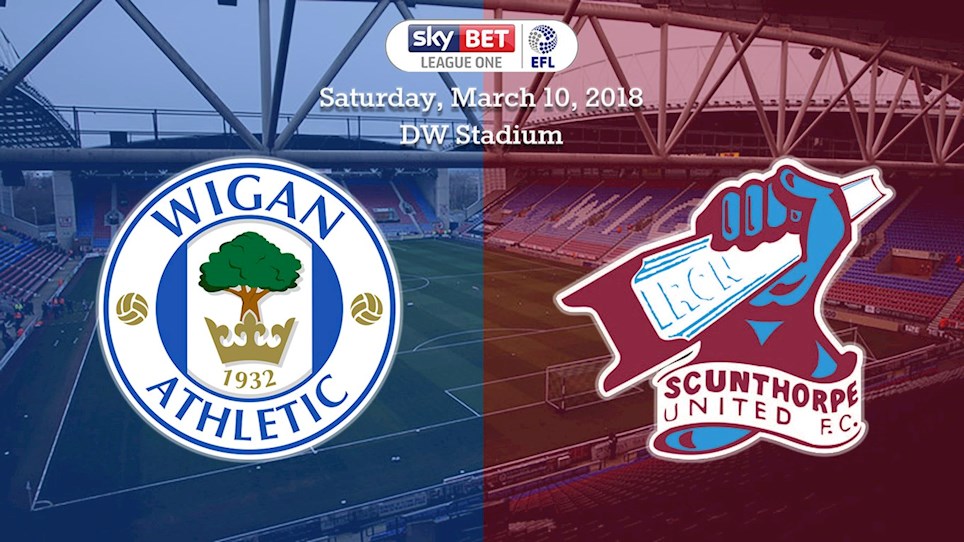 
Tickets have gone on sale for the Iron’s League One trip to face Wigan Athletic on Saturday, March 10, 2018 (kick-off 3pm).