Scunthorpe United is delighted to have signed central defender George Taft on loan from Bolton Wanderers until the end of the season, subject to EFL ratification. 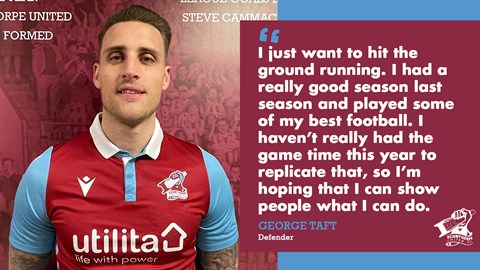 The 27-year-old began his career with hometown club Leicester City in 2011, where he progressed through the academy.

Whilst with the Foxes he was loaned out to Kettering Town, Swedish club Karlstad BK and York City to gain first team experience before joining Burton Albion on a permanent basis in 2014.

During his time at Pirelli Stadium, the 6ft 3in defender enjoyed the first of his loan spells with Cambridge United.

After two seasons with the Brewers, he completed a move to Mansfield Town in 2016 and again played for Cambridge whilst on loan.

He made a permanent move to Abbey Stadium in 2018, where he made 64 appearances, netting three goals, during a two-year stint with the U’s.

Taft has made five appearances in all competitions for Bolton since signing in the summer and has also represented England at under 18 and under 19 levels.

He's made a total of 184 senior appearances, scoring on six occasions.