First team manager Neil Cox gave his thoughts to iFollow Iron after the team made it four league wins in succession for the first time since January 2019 with a 3-1 home victory over Harrogate Town. 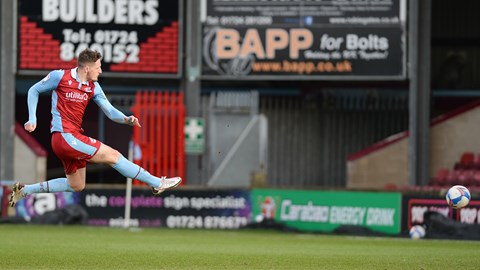 Additionally, it was the third home success in a row, which is the first time this has been achieved since November 2017.

Devarn Green opened the scoring from close range with the first opportunity of the game, but the visitors levelled through a Josh March penalty shortly after a disallowed Ryan Loft effort.

However, the Iron striker managed to get his goal just before the half-time break, and then substitute Lewis Spence sealed it with a brilliant effort from 35 yards in the 90th minute.

Due to games being either postponed or abandoned this was United’s first game in three weeks, and Cox said: “Today was pleasing, we’ve had a difficult three weeks after having such good form with three wins in a week, and then not being able to play for three weeks. So it’s been hard to even get the boys some training time and I knew it would be a difficult test today.”

He added: “I watched Harrogate against Carlisle on Tuesday night; they were excellent. They put pressure all over the pitch and try to force mistakes out of you, and I knew that if we stayed in the game, we’d get chances later on.

“I didn’t expect Spenno (Lewis Spence) to shoot from 30 yards and it ends up in the top right-hand corner!

"I'm also pleased for the squad. Kev (van Veen) comes back into the squad and Spenno and others came on and did a good job.

"It’s not about the 11 that play, it's about the team and about the squad. John McAtee and Myles Hippolyte didn’t get in the squad today, so I’ve got a really strong squad at the moment fighting for places.”

Talking about the first goal of the game by Green in the first half, he said: “Dev got the first goal and we’ve been working on getting forward and getting into the box, especially the wide men.

"There was a nice little bit of play and a good bit of work by Lofty down the right-side and it came to him quickly in the box. However, he relaxed and placed it into the back of the net.”

During the game, the Iron had a goal disallowed, just before a penalty that let Harrogate score, he said: “They’ve got to be tight (decisions) as Lofty was sprinting in onto a bullet cross into the box. It might have been offside but I’ve not seen it yet. I’m a little bit disappointed with the penalty as I think he went down a little easy.

"After that, we showed a lot of courage and went in 2-1 ahead at half-time."

Mentioning the second goal by Ryan Loft, the manager commented: “It was good play by Lofty running in and just to relax in front of the goal, earlier on in the season he would have probably snatched at that. As I mentioned he and Mark (Lillis, assistant manager) have been doing a lot of work on just putting it in the back of the net.

“Lofty’s full of confidence at the minute, he has missed a couple of days training this week, so he was a little bit leggy late on but I expected that. He’s a good player and a work in progress.”

Emmanuel Onariase came off with 13 minutes remaining, and Cox explained: "He's been struggling a little with a bit of tendonitis, and it's been difficult for him to train as we've been on 3G a lot so he missed a little bit. We got him through most of it, and we have to give credit to JB (Jacob Bedeau, who came on) as he's been waiting in the wings, not had too many opportunities but has trained really well, and he did well today. We have people fighting for positions and it's good to see.

"Manny will be assessed ahead of Bolton, as will everybody else. We have one or two knocks in there at the moment, after three weeks off, and we worked them really hard on Monday and Tuesday to get them ready for the next seven weeks of Saturday-Tuesdays."

Devarn Green was brought off on 59 minutes as a precaution after landing awkwardly in the first half. "It meant we brought Kev on sooner, and it got 30 minutes into Kev, while Eisa played on the left-hand side. Dev said he was fine but just felt it a little bit so we'll assess him and get a team ready for Tuesday."

Looking ahead to Tuesday’s match away against Bolton Wanderers (7pm kick-off), Cox said: “I’m going to need everybody as we’ve got Tuesday-Saturday for seven weeks now. I’m going to have to chop and change. I’ve got a lot of people to pick from and I think today was probably our best result of the season. It was difficult after three weeks off, we dug in there and showed a lot of spirit."

See much more from Neil Cox, Devarn Green and Lewis Spence on iFollow Iron. Click here to get an iFollow match pass for the away game at Bolton Wanderers on Tuesday night.