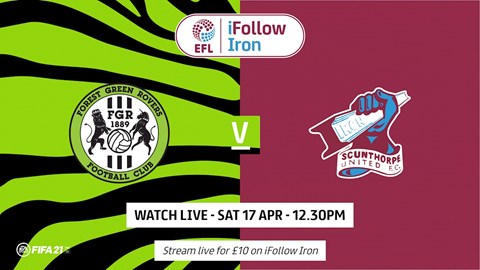 The 32-year-old stated the side simply “have to be better” and that everyone involved needs to continue to “give everything for the gaffer and for the club".

“It’s very disappointing. Sloppy goals have done us, and we didn’t take our opportunities when we got them,” he said, talking to iFollow Iron.

“We’ve been punished against a team that beat us up on the day and we have to be better. We have to analyse it and see where we went wrong - that’s myself personally and everyone in the dressing room. We have to look at ourselves in the mirror.

“The good thing about football is that there’s another game on Saturday where can right quite a few wrongs and people can show their willingness to fight for the shirt, to show that they want to be at the club and prove to everyone who pays their hard-earned money that we want to be out there, and we will give our all.”

The former Galatasaray and Reading player gave his take on the frustration of the season overall, with a number of injuries, illness and the COVID situation continually hampering Neil Cox’s ability to name a settled side.

“The gaffer is doing his best,” he continued.

“We come in for training some days and there are a couple more injuries and he has to mix and match and put people out there who aren’t fit, who aren’t in the best of form or have that confidence. It’s tough and he’s doing the best he can. As a whole, we need to show him that we are good enough to be here next season, for him to want us to be here next season and that starts again on Saturday.

“It’s a very patched-up team at the moment and there are changes left, right and centre through injuries. It’s been a tough season, but it is what it is, and the gaffer always tries his best to put a team out there to try and win the game.”

As an experienced senior player in the squad, Karacan is one who feels the responsibility also lies on his shoulders to support the manager and rally the squad to go again to restore pride in the team and the individuals selected to play.

“If you want to make a good career as a football, you have to take pride in your performances, whether that’s on the pitch, or off the pitch. Maybe a few of us have been found out today,” he stated.

“It’s tough, but what will happen is myself, and the people that want to be here will come in on Thursday and do everything we can to put things right for that game on Saturday.

“We have to go again Thursday, recover well, put in a shift on Friday and make sure that you’re picked on Saturday to show the gaffer that you want to give everything you can for him and for the club.”

See much more from Jem Karacan on iFollow Iron. Click here to get your Forest Green vs Iron match pass.