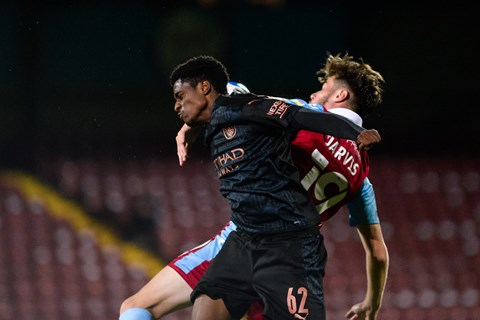 The Iron were well beaten on the night, as Cox made eight changes from Saturday's League Two win over Carlisle United to give game time to a number of players who haven't had so much in recent weeks.

Speaking to iFollow Iron after the match, he said: "Not only did we get beaten by a better side technically, but we were out-worked, out-run, out-thought. In the last 25 minutes they just did what they wanted. There was no team, no effort, no togetherness.

"I really am disappointed with the way we played, our reaction to going 1-0 down and the lack of thought on the way we were going to play, which we did work on prior.

"I've learnt some of the boys' character. It's going to be a long hard season for them if they don't want to work 110 per cent for their man next to them, and not show a spirit for their team-mates. That was it tonight.

"In the first 25 minutes we were okay, and had good opportunities to score goals but as soon as we went 1-0 down everyone went into their shells and there was a lack of character.

"It looked like their young lads wanted it more than us and that frustrates me. I've spoken to the players after and let them have it. I had the whole group in there to say what I expected. If we're going to get beaten this season, I expect us to go down with more fight than that.

"What really frustrates me is people knock on the door and say they want to play in this position, that position, etc and I give them those positions and their thoughtfulness for everyone else around them in the team wasn't there tonight. I saw it yesterday in training. We had a good result on Saturday (against Carlisle) and a lot of the lads took their foot off the pedal tonight. They're the ones who should have been working even harder to make sure they got in the team on Saturday.

"If anyone takes any credit from the game tonight then it's Alfie Beestin in midfield, because he did a really good job in the middle of the park.

"It was good for Manny (Emmanuel Onariase) and Rowey (Jai Rowe) to come on and play 45 minutes too.

"This game is gone now. It's done, we move on. We come in on Thursday and get ready to play Tranmere in what will be a tough League Two game."