Striker Kevin Van Veen is hopeful to be back in the squad in the near future, possibly as soon as Sunday's Emirates FA Cup first round home game against Solihull Moors, after making a return to full training after a long-term knee injury.

The 29-year-old has been out since the second week of pre-season after having to undergo an operation, but is happy to be edging closer to a return to action, having taken part in the last five full training sessions.

Speaking iFollow Iron, the Dutchman said: “Obviously it’s been tough and frustrating, and it’s been a while, but I’m happy to get back.”

Talking about his road to recovery, he said: “It's been mentally and physically quite a test. Obviously last season got cancelled early because of the Coronavirus. Then you finally hear you can return to work, but on the second or third day of pre-season I felt something in my knee.

“To get confirmation from an MRI and hear I was out for a good three months was very annoying and tough to handle. But I worked very hard and I’m really happy to be back out on the training pitch.

“I’m way ahead of schedule, I think. I’ve got to give credit to the medical staff as we have been working very hard together, and it’s up to me now to get my fitness back up, look after myself and hopefully I’ll play soon.

"They've looked after me with my fitness programmes, working on getting my leg stronger and bigger again, and doing a lot of cardiovascular work.

“It’s been hard. It’s been eight months all together (since my last league game) if you include the first lockdown."

Speaking ahead of the game on Sunday, Van Veen is hopeful to be involved. He said: “It’s too early to properly start, but I'd be very happy to be involved.

"At least if I’m around the team I can give some players advice or help the team before the game, like pep the boys up to get a win and play my part for Sunday.”

Van Veen spoke about the effects of isolation, continuing: “It’s been so hard with the procedures of isolation before you get an operation. The first two weeks when we found out I needed an operation, I train seperately on my own (due to COVID-19 proecedures). I was always inside on my own.

“I've watched every single game, away and at home, and it’s been frustrating obviously, but it’s probably more frustrating playing in it when it’s not going as well as we want it to. I definitely want to get back on the pitch, help the team and hopefully score goals again like last season."

Speaking about this weekend's FA Cup challenge, he continued: “I’ve never played against Solihull, but I’ve heard they are a very good team. I think they have around six or seven clean sheets, so they are going to be hard to beat.

“At this very moment there is probably not much difference, the team that works the hardest and has better quality on the pitch will win on Sunday and hopefully that’s us."

Preparation has been difficult for United as the last three games has to be called off due to a number of players testing positive for Coronavirus. Van Veen added: “It’s been tough times at the club. We got hit by Corona and a lot of the players needed to be isolating, so they have been missing training.

“I think the gaffer is working hard to put the best team out on Sunday, and hopefully we will be on top of it and beat Solihull.”

See much more from Kevin van Veen on iFollow Iron. Click here to buy a £10 match pass for the game against Solihull Moors. 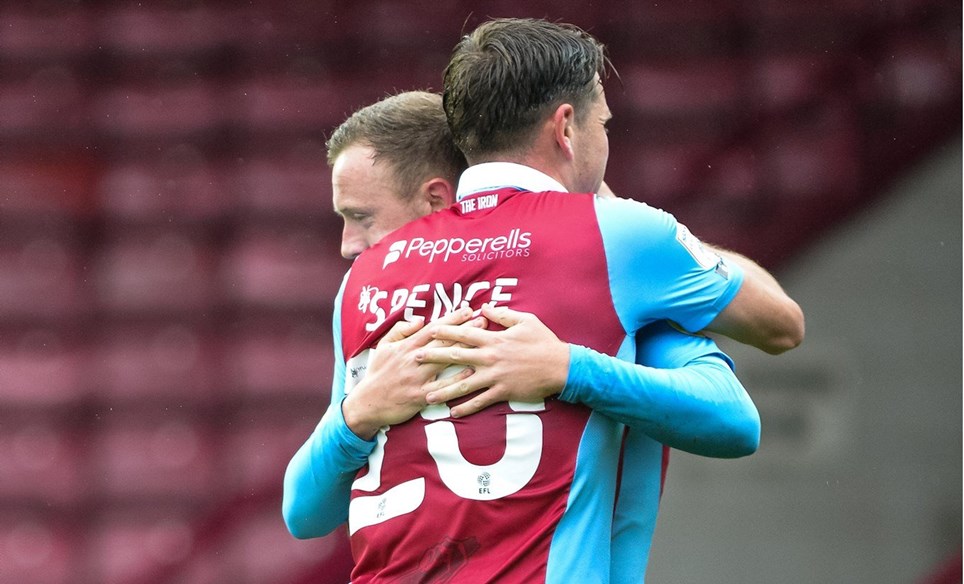 
The Iron can be backed at 17/20 with Sky Bet to defeat Solihull Moors in the Emirates FA Cup first round at the Sands Venue Stadium on Sunday (12noon kick-off). 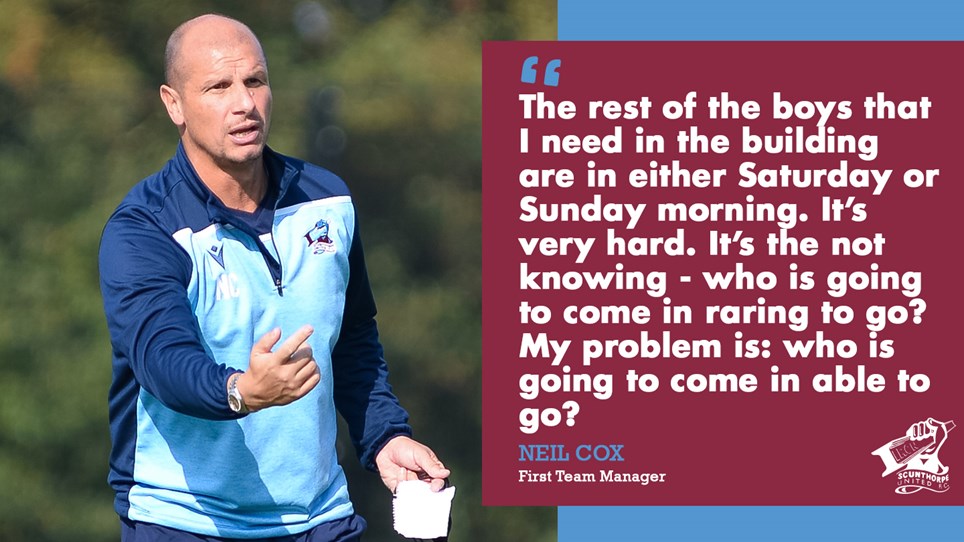 
Since coming back into the building himself earlier this week, first team manager Neil Cox’s focus has been preparing the players he has available to him for the Emirates FA Cup first round tie... 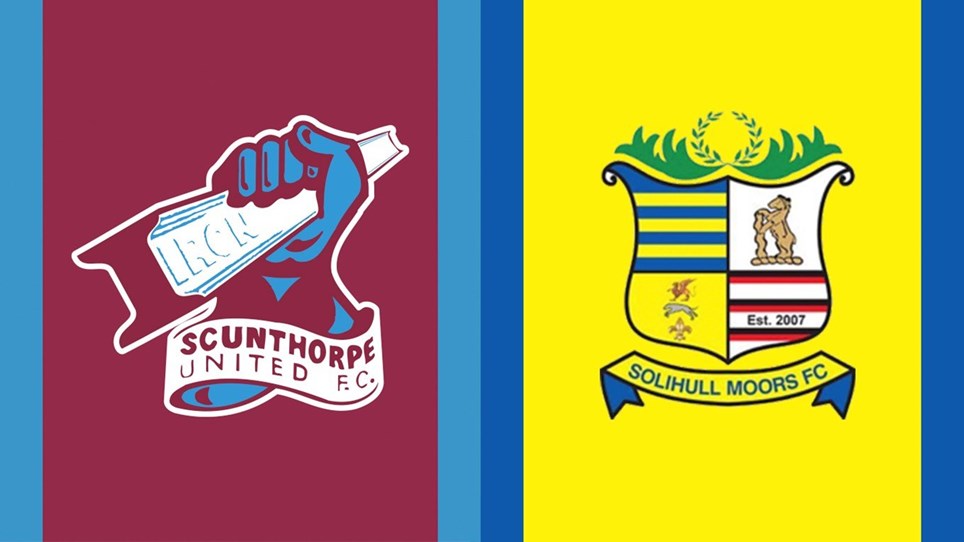 
The Iron are in FA Cup first round action on Sunday, November 8th when they host Solihull Moors (12noon kick-off), and though the game will be played behind-closed-doors due to the COVID-19 pandemic,... 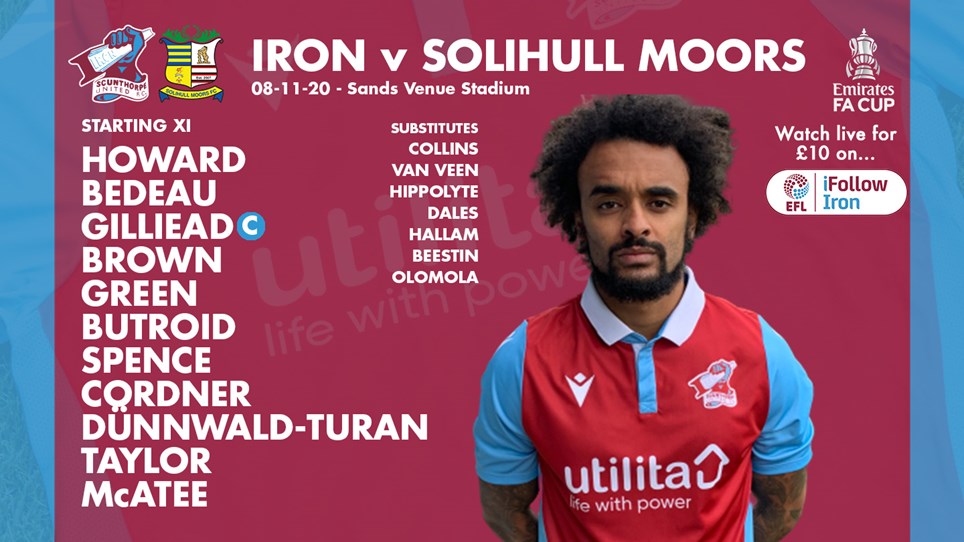 
The Iron have named their team to face Solihull Moors at home in the Emirates FA Cup first round.