A part of the Old Show Ground still lives on in Rob Jubber’s garden. Once the club’s youngest ever fan, Rob brings his own boys to games now. We spoke to the Scunthorpe supporter about 40 years of following the Iron. 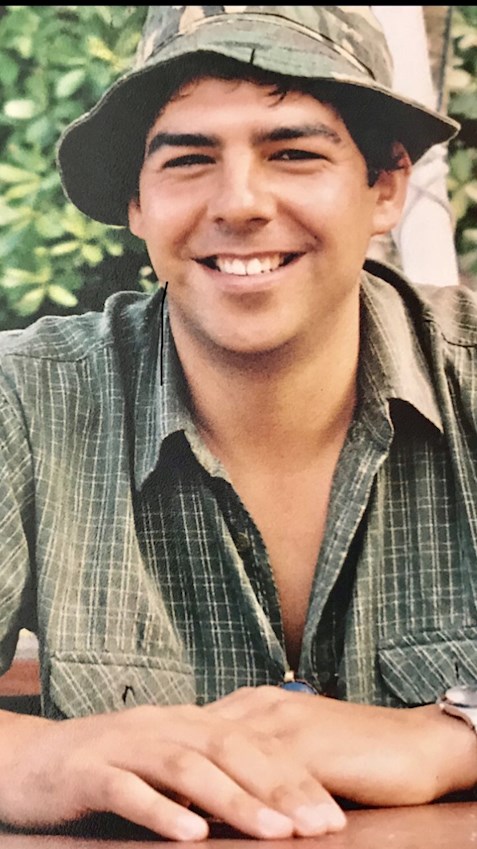 Why are you an Iron fan?
I was bred into Scunthorpe and my dad took me as soon as I was born.

First Iron game?
My first game that I attended was in September 1977 and if I look at the history books, it would’ve been Darlington at home in the League Cup. It was a 1-0 home win!

Favourite Iron game?
Away at Tottenham Hotspur in the FA Cup in 1987 (the Iron can be seen celebrating a goal from that game below). It was a 3-2 loss but I remember the Scunthorpe fans going crazy when we equalized and that’s when we first understood the magic of the small team getting a big draw in the cup. 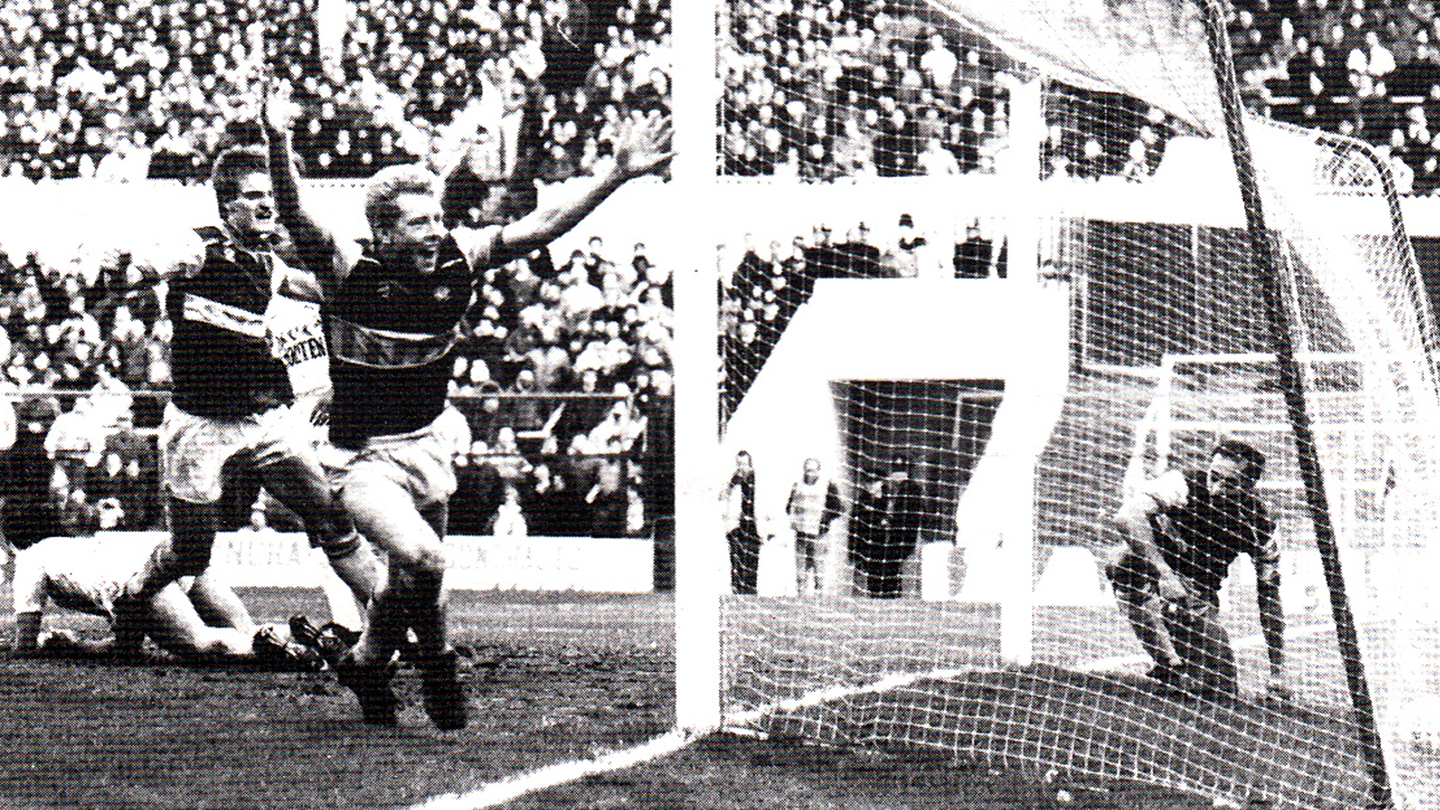 Matchday routine before kick-off?
I’m heavily involved in junior football with Bottesford Town at various age groups so it’s a case of working out how quickly we can get to the game from wherever we’ve played.

Favourite place to eat before a game?
We have French toast so the kids can refuel; I tend to make that every Saturday.

Which stand do you sit in?
I sit in the main stand which is now called the Lincs Lifts Stand. I try to sit on the front row to keep the linesman on it and give them hints and tips regarding their performance.

Where's the furthest you've travelled to watch the Iron play?
That would be Wembley. I remember the first time we visited there in 1992, losing to Blackpool in the play-off final. Tony Daws’ equaliser was probably one of the best goals Wembley’s seen. Then they win in the shoot-out; I think Jason White’s penalty is still going! 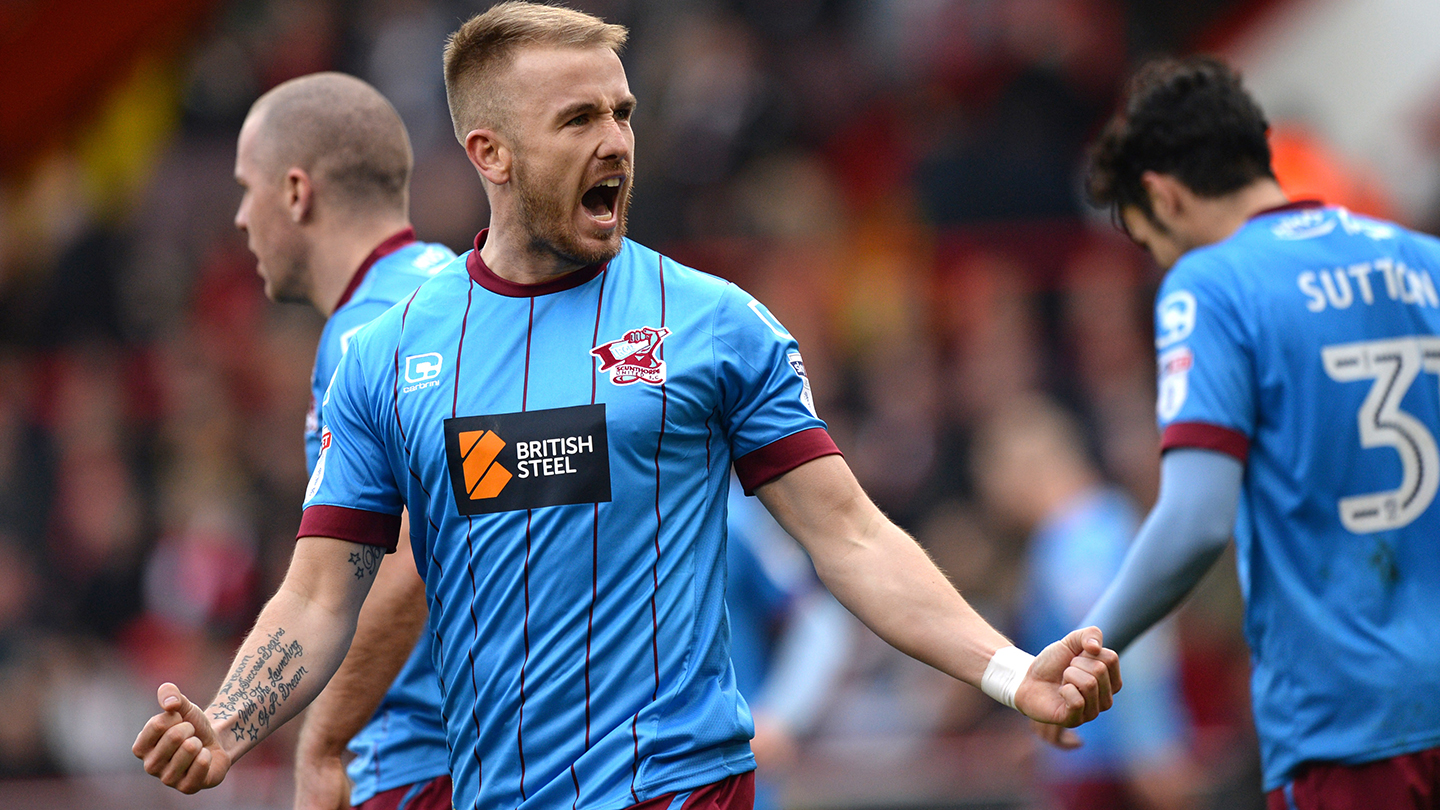 Favourite away ground and why?
Over recent years, Sheffield United. When they start to sing their song about greasy chip butties before kick-off, it’s a really good atmosphere. Over the last few years, we’ve taken teams to Bramall Lane where we’ve been able to compete. The 1-1 draw a couple of years ago where Harry Toffolo got sent off (Paddy Madden can be seen celebrating his goal from that game above), we managed hang on. It’s only just down the road, as well.

Favourite piece of Iron memorabilia?
When we played our last game at the Old Show Ground, my dad nicked a corner flag off one of the stewards and cut a bit of the turf out from the penalty box and planted it in our then-house in the back yard!

Do you collect Iron programmes?
I don’t but my dad had loads, but he’s not with us now. When I pop to my mum’s, I find all sorts of programmes in the loft going back to the 60s.

What’s been your favourite ever Iron kit?
Anything in claret and blue stripes, I’m a fan of. When Brikenden sponsored us from 1987, I liked that kit.

Whose name and numbers have you had on the back of your shirt?
I’ve never been into that but my boys are. One of them is left-footed so he liked Josh Morris and the other is a goalkeeper and he had Luke Daniels on his.

Do you have a favourite ever Iron player?
I narrowed it down to a defender, midfielder and striker. For defender, I’d definitely say Matt Elliott. I was training around the Scunthorpe youth team when we had him and watching him grow at the back, I’d say he was the best defender we’ve ever had. Ian Hamilton was a great midfield player for us before he moved on to West Brom. For a striker, I’d say Gary Hooper; if you got the ball to him, we had a chance of scoring.

Have you ever met any Iron players?
I met Graham Alexander as a player and he’s not changed much! When he was manager and it snowed a couple of seasons ago and they asked for volunteers to come and clear the pitch, he came and had lunch with us. I met Dave Moore, too, when he was manager and I was training around the youth team.

If you could erase one moment from the Iron’s history, what would it be?
The home game against Millwall in the play-off semi-final in 2017; we were on the cusp of another final. We’d done the hard work away and just needed to do the job at home. It was a difficult one to take.

If you could relive any Iron game in history, what would it be?
Any game where we’ve beat Grimsby! Also, the home game against Rotherham in 2018 in the play-off semi-final when we drew 2-2. Rory McArdle hit the bar twice and we were unlucky not to take a lead.

If you could watch the Iron play any club in the world, who would it be and why?
Scunthorpe have a link with Bottesford Town now where the Under-23s play fixtures there and Scunthorpe have put money into developing that facility. I’ve supported Scunthorpe for 40 years and I’ve been associated with Bottesford. For me, it’s a dream to see that. You could say Barcelona or Real Madrid but everyone’s going to say that.

ROB JUBBER'S FIRSTS…
My first home game was… Darlington in 1977 in the League Cup. Those were the years when you played the first round of that cup before you opened the league fixtures.

My first away game was… Grimsby but I’m not sure what year. My mum was against my dad taking me.

My first Iron shirt was… The Brikenden era shirts in the 1980s.

My first Iron hero was… Dave Hill. He was an honest player and worked so hard for the team, even if you’re not blessed with tons of ability. He encapsulated what being a Scunthorpe player is about.

I attended my first Iron game with… My mum and dad. I have a picture of me with them and it says Scunthorpe United’s youngest ever supporter when I was a baby.