Lifelong Iron fan Eleanor Imre talks of Murray Wallace, the Iron’s play-off endeavours, and how superstition has played a large part in her family’s matchdays over the years.

After her father won two Iron season tickets in a competition in 1982, Eleanor’s journey as a regular in the stands began, and since then, she has never looked back.

Why are you an Iron fan?
EI: I’m nosey really! I used to wonder where my dad went on Saturday afternoons, then I found out it was to watch the Iron, so he took me along to my first game.

What was your first Iron game?
EI: It was at home against Barnsley in 1977. Unfortunately, on the day we lost 2-1, which was in the old Division Four.

What’s your favourite ever Iron game?
EI: That’s a tough one, there have been so many over the years. I think it would have to be when we played Tottenham Hotspur in the third round of the FA Cup in 1987. I have a soft spot for Spurs, but we (the Iron) played really well despite losing 3-2, if only we didn’t let that header in, in the last minute!

Do you have a favourite place to eat pre-match?
EI: I don’t, but I have to have a drive-thru Costa Coffee before the game.

Which stand do you sit in?
EI: I sit in the main stand (Lincs Lifts Stand) in front of the director’s box. I’ve enjoyed becoming friends with the fans around me over the years.

Where’s the furthest you’ve travelled to watch the Iron play?
EI: I usually travel with the Supporters Club. It would be Plymouth Argyle, I think. I’ve been quite a few times over the years.

Favourite away ground and why?
EI: The most impressive stadium I’ve been to is probably Manchester City’s (the Etihad Stadium). But my favourite is the old White Hart Lane, hopefully we get them in a cup again!

What’s your favourite piece of Iron memorabilia?
EI: That would be a programme I have signed, from a friendly when Tottenham came to our place in 1982. All the Scunny players signed it, and I chased Glenn Hoddle down the player’s corridor to sign it, if I hadn’t been a young girl I think he might’ve called the police on me!

Do you collect Iron programmes?
EI: I used to, and there are some precious ones that I’ve still got. I gave away 30-years-worth to the Winterton Iron so they could raise some money, they take up so much space. 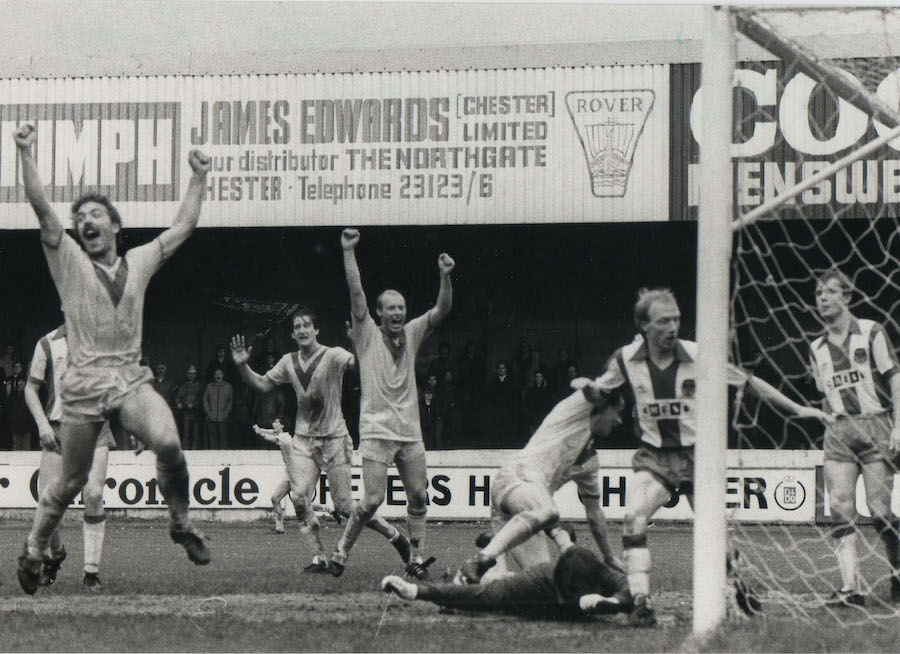 What’s been your favourite Iron kit?
EI: The 1982 away kit. I remember winning promotion at Chester in that kit (above). I loved the kit itself, but there were some great memories attached to it. 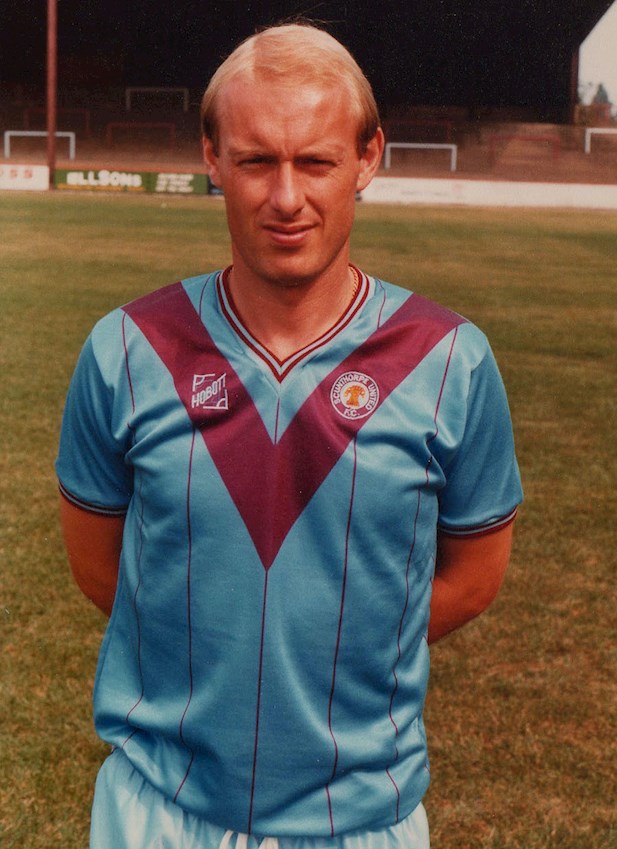 Do you have a favourite ever Iron player?
EI: That would be Steve Cammack (above). In that era, he used to score all our goals. He was in the away end at Chesterfield a few years ago and pointed at some fans and said “don’t worry I’ll keep them under control”. At first I thought it was just a normal fan being nice! 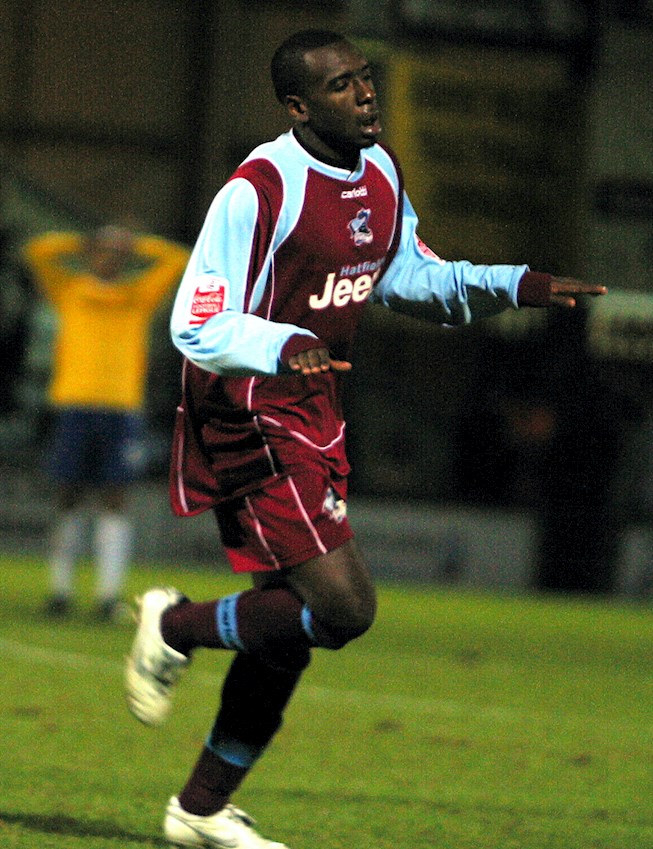 Have you ever met any Iron players, past or present?
EI: I loved meeting Cleveland Taylor (above), his smile was infectious! I’ve also met Murray Wallace at presentation evening and he was a real nice person, we talked to him all night.

If you could erase one moment from Iron history, what would it be?
EI: The 1992 play-off final defeat at Wembley. We lost on penalties, it was heartbreaking. I spoke to Graham Alexander, and he said because of his penalty miss, he learned to take a good penalty. He actually apologised to me. 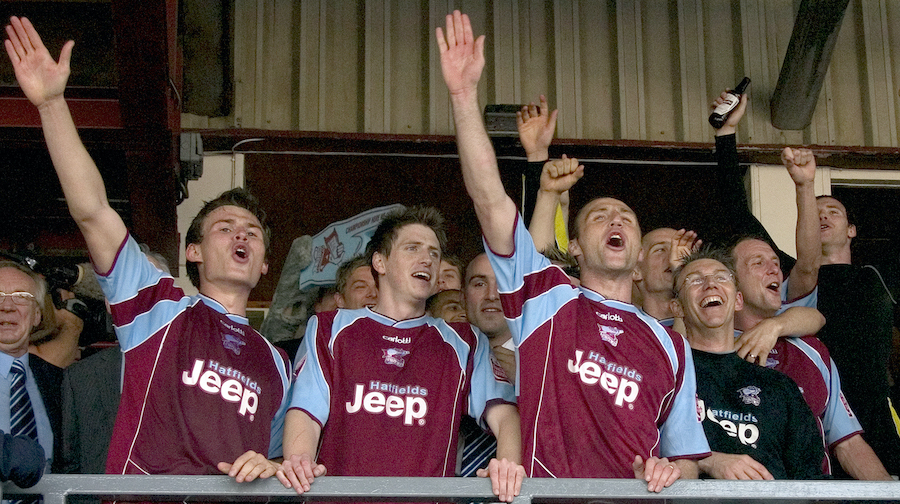 If you could relive any game in Iron history, what would it be?
EI: The Huddersfield Town game in April 2007 (above). We won promotion to the Championship on the day, winning 2-0.

If you could watch the Iron play any club side in the world, who would it be and why?
EI: Barcelona, because of the players they’ve got. I’d love to visit the Nou Camp and see Messi play. My other choice would be Inter Milan at the San Siro, so the Iron could have the AC Milan dressing room!