It may not have been too long ago since we last spoke to former striker Paul Hayes for the programme, but since then, he’s retired from playing, made a brief comeback for a mate, completed his coaching badges and become a football agent. With this feature going in the edition versus a former club Newport County in January, we took the opportunity to hear how it’s going for him on the other side of the game.

“It’s interesting,” the 36-year-old said. “I was quite fortunate actually because some of my close former teammates have also become agents, so I’ve had the likes of Brian Howard (Momentum), Scott Barron and Richard Lee (Refuel) and Wayne Henderson, along with my old agent to help me. The transition has been quite good."

Agents - or intermediaries as they are also known - can often get bad press, not only from football clubs themselves, but also in the press and from football players, but with an influx of former players now turning their post-career hand to the industry, the tables might well be turning on how we eventually perceive them.

“It’s an interesting conversation because agents can - and do - get a bad representation,” Hayes continued.

“There are always two sides to the story, the same with players and managers. When I became an agent, my first thought was always about the player - looking after them and building a relationship with them. I’ve got Charlie Kelman down at Southend, who has just turned 18 and has been in and around the first team. He wasn’t being looked after right, so I went in, talked to him, talked to Southend, went for dinner with him and his mum and started to build the type of relationship I think all players should have with their agents, like a footballer’s dad. I’ve gone through every scenario possible as a footballer - the good, the bad and the indifferent and most agents haven’t experienced that. I can relate to players where some agents can’t."

He had seen the ugly side of intermediaries during his own playing career which spanned almost two entire decades, so knows exactly what he would have wanted and what guidance he would have needed.

“The way the world is going, especially with the mental health issues, it’s the best way to deal with footballers. A lot of footballers are insecure people,” he stated.

“They love praise and they love attention, but once they’re told they’re not good enough or not wanted, they go inside themselves. It’s a tough sport and especially the way social media is, everyone has an opinion and it’s more out there than it ever used to be. That’s the biggest thing I realised becoming an agent, I need to be someone they trust and give guidance. If you can’t believe your agent to tell you the truth, can you trust him to deal with your football career?

“I had an agent in my career who lied to me and took money off me without me knowing and that’s the one person who shouldn’t do that. Going through that experience, you can never build that trust again.”

It must be hard to forge a career in the agent world on your own, I hear you ask? With 11 unique EFL clubs represented across his career and a number of players and worked with and faced, it has seemed like no mean feat for the Dagenham-born former forward.

“I’ve been fortunate enough in my career to forge a reputation and I’ve always had a good response from people,” he said.

“If I take Steve Evans at Gillingham as an example, I’ve never spoken to him before, but played against his clubs many times before. He’s one who can get a bad reputation himself, but I never judge anyone if I don’t know them myself. I got his number and gave him a message explaining I’d retired and become an agent and I’d like to talk to him, and he replied back straight away. Les Ferdinand was another example too.

“In the back of my mind, I probably wanted to become a coach and a manager - that’s why I took my coaching badges. However, personal reasons meant it wasn’t going to be possible. It’s diverted my career a different way.”

Just finally touching on both clubs involved in the fixture this interview went in the programme for, there is a lot contrasting his memories while with the Iron and the Exiles, but one important similarity in that he holds the sides in his highest regard.

“I made my debut at Scunthorpe and I was young, naive and excited,” he reminisced.

“Having three spells there, meeting my family there and living there for a number of years, it became a second home and part of my heart. Newport - I’m so thankful to Flynny (Michael Flynn), Wayne Hatswell and Gavin Foxall, their Chairman, for giving me the opportunity when I found myself in a horrible personal situation. I was going through a divorce and they stuck by me when I wasn’t in a great place mentally. All the boys there really welcomed me with open arms. It was probably the best place I could’ve gone to.

“There were two really different situations across both clubs, but two clubs I’m really fond of.” 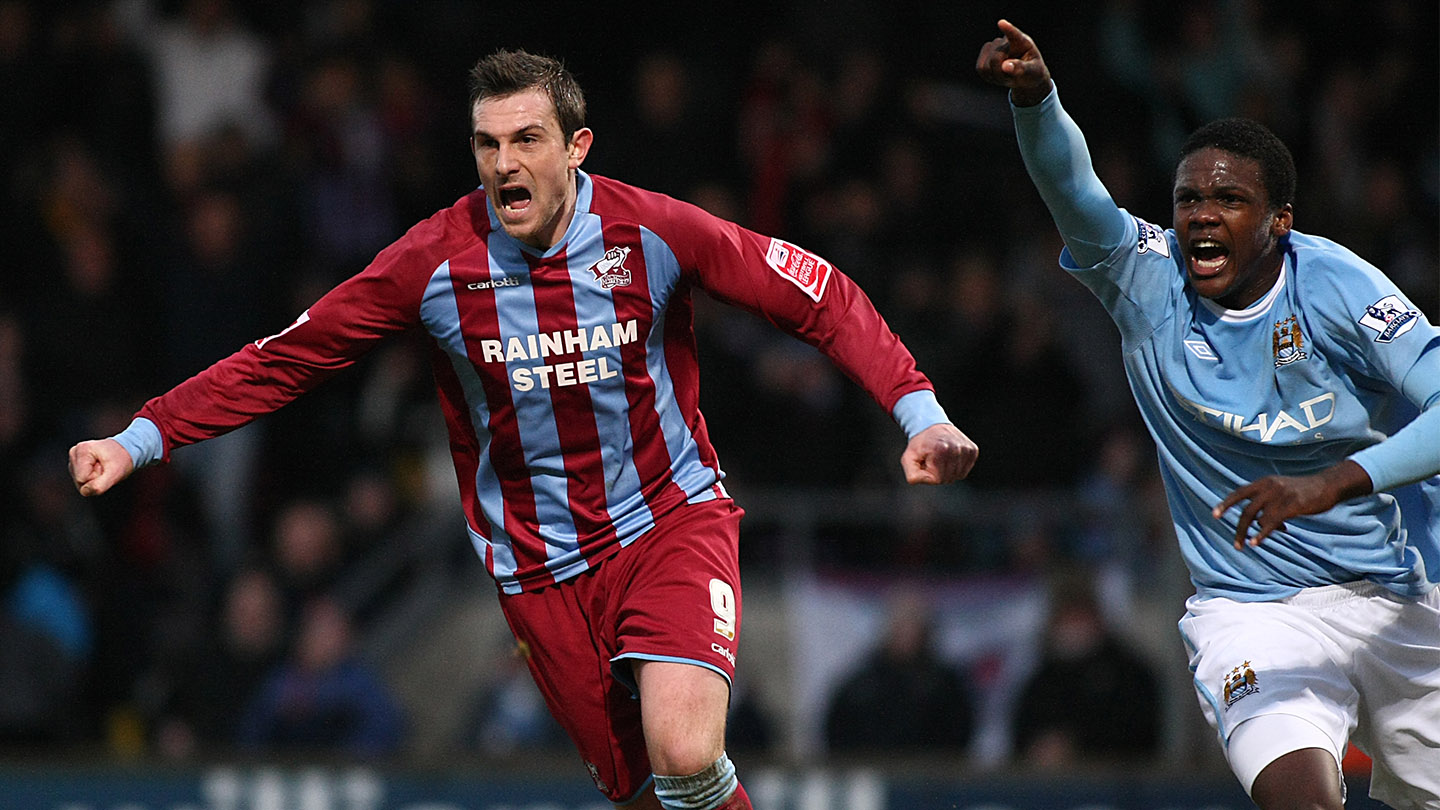 MY MOMENTS IN FOOTBALL…

WHOLE CAREER REFLECTION…
PH: It’s funny you should ask me to reflect on my career, because I’ve been very fortunate and very lucky, and I’ve worked very hard to do the things that I’ve done in football. I was around my mum and dad’s for Christmas and my dad wouldn’t say the same thing to me. He very much said that I’d let myself down, I should have been better and I should have taken it more seriously. He’s quite a harsh man to impress. I went there thinking I’ll have a nice beer for Christmas because it was the first time I’d been able to and I come away reflecting a little bit more! For myself, to have had five promotions, to score against Manchester City, Chelsea, Tottenham, playing in some fantastic stadiums and totalling over 650 games, never really picking up a serious injury until I was 32, I had a good innings.

REGRETS...
PH: Yes, going around to my dad’s house at Christmas (laughs)! I don’t think so. It’s very hard to have regrets, in any walk of life. If you start to have regrets, it alters your mindset about things. Life is about going along your journey and there’ll be ups and downs and you learn from them and that’s what turns you into a man. Where things haven’t worked out in my career, it was never down to making the wrong decision. Preston didn’t work out because my kids were getting bullied at school and couldn’t settle and I got my house robbed and the cars taken off the driveway. The club were also in administration. As you can imagine, with all the negativity, it’s very hard to put everything aside and go out there and do well. It’s not down to regrets, I met some lovely people, experienced living in the north-west and I played for a very good club.

HIGHLIGHT...
PH: It’s extremely hard. Getting your first promotion is always nice, along with scoring against Chelsea at Stamford Bridge when they hadn’t conceded for nine hours under Jose Mourinho - who went on to win the league that year. Also scoring twice against Tottenham at White Hart Lane and scoring against Manchester City have to be in the mix - not to mention the two goals against Grimsby as well! That’s got to be up there because we hadn’t played them in the league for 15 years, they came to us, I scored both, we won 2-0 and to watch those three players run into each other in front of their own fans was brilliant. It was a good moment, they’d been up there in the Championship and came down in successive seasons and we’d always been in the lower leagues, so we’d always been put down.

LOWLIGHT...
PH: Probably the lowest I got was my time at Brentford. The hardest time was 18 months into my three-year contract when Uwe Rosler decided he didn’t want me. He’s the only person who has had the opinion that I was poison in the dressing room. He made me train on my own for three months. The ultimatum was I either had to come in at 7.30am and train for two hours in the morning before everyone came in, or I’d train at 3pm until 5pm when no-one was around. I was living in Essex and that was in West London, I had to get a two-hour train across to train with the assistant manager because he felt I was a bad influence around everyone. The only person in my whole career to put me in that situation. I spoke to the PFA and other people, but I didn’t feel like I got as much support as I should have done at that time. This was seven years ago, but maybe things would be different if it happened now because of how big mental health is now.

FAVOURITE GOAL...
PH: The two against Grimsby, I’m going to have to say. It goes back to my highlights really - the goal against Chelsea and the two against Tottenham (for Wycombe). If I took out the occasion, it would have to be my third debut for Scunthorpe and the goal at Mansfield. I couldn’t have hit a sweeter volley than that from 30-yards, going into the top corner.