After signing a new two-and-a-half year deal to extend his stay at the Iron until 2023, defender Mason O'Malley is looking to get as many minutes as he can in the final 28 games of the League Two season. 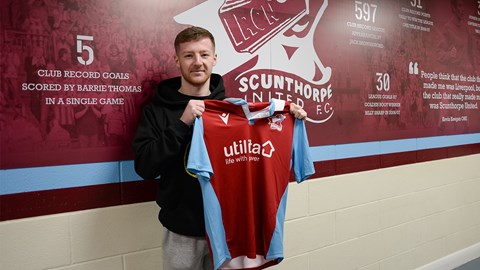 The 19-year-old left-back has impressed in his 12 appearances so far this season, graduating up from the Under-23s squad for which he played last season.

The former Huddersfield apprentice explained to iFollow Iron: "It's great to get it over the line and sorted. I'm just happy to focus on my football now.

"It's a two-and-half-year deal and there is plenty of time for me to develop. I'm always looking to improve my game so those two extra seasons give me a lot of time to better myself and improve as a player.

"It's come at a nice time, as an early Christmas present. There will be a lot of games to get stuck into (in the festive period) and it's nice to get this sorted early.

"I wasn't expecting this (at the start of the season). I was just hoping to take my chance when it came and I think I've done that, especially in the last few games I've played, helping the team and I just want to kick on more.

"You have to take your chance with both hands. I'm still young but it's a great opportunity for me. I'm excited about it and it's back to focusing on the football again."

Talking about targets between now and the end of the season, he continued: "I want to play as many games as I can really. I'm still new to League Two and have only played a handful of matches.

"I'm looking to play as much as possible. There are lots of games left and more opportunities to improve and push on as a team.

"I've recovered now (after being rested last week following the busy run of games) and feel strong and ready to go on Saturday.

"We've just had a busy run and there are more coming up. We're going to focus on each game as it comes.

"Recovery was tough on the body and the mind, playing Saturday-Tuesday back to back. (The fixtures calming down in the New Year in comparison) will slow things down a little bit, be better for the whole team and we'll be able to regroup well."

See much more from Mason O'Malley on iFollow Iron.