After growing up in Salford, Scunthorpe United fan Karen Lee was used to watching her live football over in the north west, but after moving to Scunthorpe - and going a few years without – Karen went to her first Iron match in 2003 and was “totally hooked”. 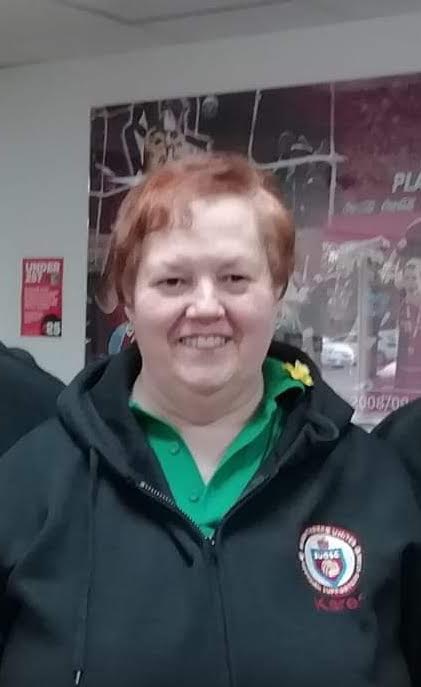 This article originally featured in our matchday programme earlier this season.

Karen revealed that she started life off as a Manchester City fan. She said: “It’s been a nightmare in the past when Scunny have played City, but ultimately Scunthorpe come first. We try to make sure the two don’t clash but if they do, it’s Scunthorpe we go to.”

What was your first Iron game?
KL: It was against Bristol Rovers at home in the league, the first game of the season in August 2003. Unfortunately, we lost 2-1 on the day.

What’s your matchday routine before kick off?
KL: We like to get there for around 12pm, and we HAVE to go to Subway for lunch. For someone who hates sandwiches it’s not a good choice but my husband loves it! After that, we go into the Iron Bar, I do the away buses for the Supporters Club, so we go in there and meet people to discuss away trips and so on.

Which stand do you sit in?
KL: It used to be the Clugston, but we’re in the East Stand now.

Where’s the furthest you’ve travelled to watch the Iron play?
KL: Ibiza in pre-season! We won the San-An Cup back in 2006. In this country though, I’d have to say Plymouth, I love the away trips. If someone had told me a few years ago, that we’d get to Plymouth and back in a day I’d have told them they’re mad.

Favourite away ground and why?
KL: I’ve always enjoyed the trips to Burton Albion (Pirelli Stadium). It’s such a friendly club - the fans, the stewards and everybody were really helpful. It’s such a good atmosphere, you’ve got standing if you want to, or there’s seating as well.

What’s your favourite piece of Iron memorabilia?
KL: It’s not actually mine, it’s my daughter’s. When we went to the San-An Cup, Russ Wilcox gave her his winners medal!

Do you collect Iron programmes?
KL: Yes, I do. Since they’ve been included in the season tickets, I’ve probably got all of them. Some weeks we get them and I’m so busy at the match, that three weeks later I say “oh, I never read that one” and go back and have a look at it.

What’s been your favourite Iron kit?
KL: I’m going to go with the black away kit from 2007. We were champions that year and I can just picture Billy Sharp in it, I’ve got one with ‘Sharp 24’ on the back, which he signed for me.

Whose name and numbers have you had on the back of your shirt?
KL: Apart from Billy, I’ve had Andy Butler, Matt Sparrow and Kevin Sharp, to name a few. I tend to buy them without names and numbers on though.

Do you have a favourite ever Iron player?
KL: Andy Butler, I’m delighted he’s back, he used to bring his family into the Iron Bar after the match, including his gran with her ‘Butler 18’ shirt! He really is a lovely guy. He’s got a twin brother as well, a kid once came up to him and asked for his autograph, he said ‘I can mate but I think you’d be better with that guy over there’ (pointing at Andy).

Have you ever met any Iron players, past or present?
KL: Quite a lot to be honest, I remember being with Billy one time, and there was an agent there who’d been watching him. We were arguing saying ‘you’re not touching him - he’s not going anywhere!’. I also remember meeting Gary Hooper, he was having photos with the fans and his dad was there shouting to him: ‘Come on, smile!’ It was all very light-hearted.

If you could relive any game in Iron history, what would it be?
KL: That would have to be the play-off final win against Millwall in 2009, it was the best feeling ever being promoted like that! It really was an amazing atmosphere.

If you could watch the Iron play any club side in the world, who would it be and why?
KL: Hyde United as my daughter’s got a soft spot for them, they had somebody who was really funny with the club tweets. We went over to see them one time when Scunny didn’t have a match, and they did a write-up about us in the Non-League Paper.