Manager Paul Hurst is optimistic skipper Andy Butler will be available for selection when the Iron visit Mansfield Town on Saturday. 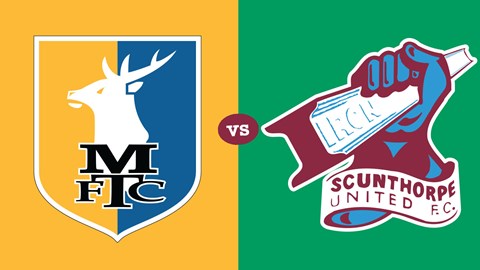 The defender came off with a foot injury during last week’s home clash against Carlisle, but Hurst explained to iFollow Iron: “He’s returned to training and seemed fine, but we’ll check that and see how he is on Friday. Otherwise, it’s almost as we were before Tuesday.

“With the exception of Joey Dawson, everyone came through it okay. As I said the other night, he injured his knee in the warm-up. We’ll find out more about him at the beginning of next week because he may end up needing to have a scan. He looked a little bit better on Thursday but won’t be involved this weekend.

“Kev (van Veen) and Ryan (Colclough) are still making their way back to full fitness. Kev was very stiff and tired as he came off on Tuesday, and was on the treatment table on Thursday, but did get out to train too.”

The boss also elaborated further on how some of the injured players are progressing.

He said: “Lewis Butroid (ankle) and Jacob Bedeau (knee) are getting nearer to a return. Lewis hasn’t been back quite as long but Jacob was on the bench on Tuesday night.

“Andy Dales (hamstring) and Levi Sutton (knee) have been doing a lot more work outside and joining in parts of training, such as non-contact passing drills. Providing everything goes well, next week will hopefully see them integrate fully back into training.

“They will obviously not be match fit but, after a week’s training, some game time in an Under-23s fixture would be a big boost for them personally and for us as a squad.

“Lee Novak (ankle) has been getting on well and is ahead of schedule so far, but at the same time it will still be a while before he’s available to us. I don’t expect there to be any setbacks, but he’s been around the place and seems in good spirits. Hopefully he can come back into a team that’s in a better place than we currently are.”

One player who could make his debut this weekend is on-loan striker Jamie Proctor, who was ineligible to play last weekend as he wasn’t registered in time and against Grimsby Town in the Leasing.com Trophy as he was cup-tied.

Hurst explained: “He’s worked hard on the training pitch and I’ve been very impressed with what I’ve seen. He’s been chomping at the bit to get out there and play, so I’m pleased we have him available now. I’m sure the fans will get to see him at some point.”

The game at Blundell Park in midweek saw United’s first victory of the season, and the boss hopes his side can progress from that and get off the mark in the league.

He continued: “It was nice to get that win. We all know we want to get a victory in the league and coming up against one of the pre-season favourites in Mansfield will provide a tough game. They haven’t had the start they would have liked either but fingers crossed we can build on Tuesday.

“Large parts of the last couple of league performances have been similar. The only thing missing was a goal and we need those to give us a chance of winning the games. On Tuesday night, we got ourselves in front, had a sloppy start to the second-half but then got on top and won it.”