The Iron return to league action on Saturday as they host Morecambe at the Sands Venue Stadium in Sky Bet League Two (kick-off 3pm).

United will be looking to bounce back from last week's 2-0 away defeat at Mansfield, which came following the first victory of the campaign against Grimsby Town in the Leasing.com Trophy four days prior.

Morecambe, however, come into the game after battling for a point against Salford City last week although they might count theirselves fortunate that they emerged with a sharing of the spoils after the Ammies missed two penalties in the 2-2 draw at the Globe Arena.

Iron manager Paul Hurst confirmed in his pre-match press conference he will be without captain Andy Butler and midfielder Ryan Colclough for the weekend's game.

Butler injured his ankle a week ago against Mansfield Town, despite completing the full game, while Colclough felt a slight reoccurence of his recent groin problem which resulted in him missing training on Thursday.

Jamie Proctor is eligible to make his home debut for the club after making his first start last weekend at the One Call Stadium, while James Perch is back in contention for the match, after serving a three-match suspension incurred for a red card against Cambridge United in the league last month.

Both Jacob Bedeau (knee) and Lewis Butroid (ankle) returned from their respective injuries in midweek to face Southend United Under-23s in the Premier League Cup second qualifying round, while Levi Sutton (medial ligaments) and Andy Dales (hamstring) are back in full training. Hurst expects the latter two to be available for the next Under-23s encounter as they build their way back up to full fitness.

Meanwhile, Kgosi Ntlhe (back) and Jordan Hallam (ankle) have recently been added to the injury list which also comprises of Lee Novak (ankle) - although the Geordie is recovering well and could be back running on grass in due course. Ntlhe's back injury is not as bad as first feared though, as he edges closer to a return.

The Iron fell to defeat against Mansfield Town at the One Call Stadium, after a goal either side of the break for the Stags.

The game got off to a steady start, as both sides looked to get a foot-hold early on, but it was the Iron who had the first opportunity in the 12th minute. Abo Eisa stood over a free-kick 25-yards from goal, in a good position but his effort struck the wall, and was cleared by the home side.

Just a minute later, Yann Songo’o found Eisa out wide on the left with a low driven pass. The latter checked inside onto his right foot, and rifled a shot over the crossbar.

In the 22nd minute, Nicky Maynard forced Rory Watson into his first save of the match. After picking up a loose ball in the Iron half, Maynard charged forward and curled an effort goal-bound, but Watson was there to palm away to his left.

Shortly after Maynard’s strike, Jordan Clarke was on hand to head clear a dangerous cross from the right, with two yellow shirts lurking at the far post.

Mansfield then broke the deadlock in the 31st minute through defender Matt Preston. He found himself at the back post to slide the ball past Watson, following a cross from the right.

Ten minutes later, the Iron had a great chance to find the equaliser. Eisa carried the ball past multiple Mansfield shirts, before being fouled on the edge of the box. Debutant Jamie Proctor stood over the free kick, and his low drive crept just the wrong side of the post.

In added time at the end of the first half, Regan Slater delivered a pinpoint corner into the box, which Proctor leapt to meet, but the striker couldn’t quite keep his header down, as it flew narrowly over the bar.

Paul Hurst brought Ryan Colclough and Kevin van Veen on at half-time, in a bid to change the course of the game for the Iron.

Five minutes into the second period, the Iron had a corner from the right, thanks to some good wing play by Colclough, he delivered the corner which was met by Butler, but the centre-back’s header was gathered well by home ‘keeper Logan.

On the 54th minute, the hosts doubled their lead through Danny Rose. The striker was on hand to poke the ball beyond Iron ‘keeper Watson near the penalty spot.

Soon after, the Stags looked to inflict more damage after a sweeping move ended with CJ Hamilton cutting inside from the left flank, and firing an effort into the side netting, with Watson covering the near post.

With 64 minutes on the clock, Colclough looked to make a difference down the right wing, gaining a yard on his marker before whipping a cross towards the back post. Eisa was arriving, but the wide man couldn’t quite meet the delivery. Moments later, it was Lund this time on the right side sending the ball into the box, van Veen met his cross with a deft flick, but the ball shot wide of the left post.

Seven minutes later, the Iron countered at speed, winning themselves a corner in the process. Colclough delivered the ball which was temporarily cleared, before referee John Busby stopped play due to a clash of heads.

In the 74th minute, the Iron had arguably their best chance of the game. Van Veen curled a pinpoint cross onto the head of Proctor at the far post, but the latter’s header flew just past the top corner.

Three minutes later, the ball sat up nicely on the edge of the box for the home side, and Kellan Gordon lashed an outside of the boot strike high and wide of the target.

Soon after, the Iron were up the other end through Colclough, the substitute drifted in-field - after picking it up on the right - and drilled a shot into the Mansfield side-netting.

In the 87th minute, as a result of Colclough and van Veen’s high pressing, Logan is forced into a mistake, but luckily for the home ‘keeper, his defenders were on hand to clear any danger.

Iron fans can pay on the day for the away encounter at Mansfield Town on Saturday, September 7th (3pm kick-off).

Tickets are now OFF SALE from the Sands Venue Stadium.

* Supporters will be able to purchase tickets on the day. These would be cash only sales as there is no facility for card payments in the away end and there is only one ticket booth, so arriving early or buying in advance is strongly advised.

Please note that young adults must show their ID and are advised to bring it with them on the day of the game too. 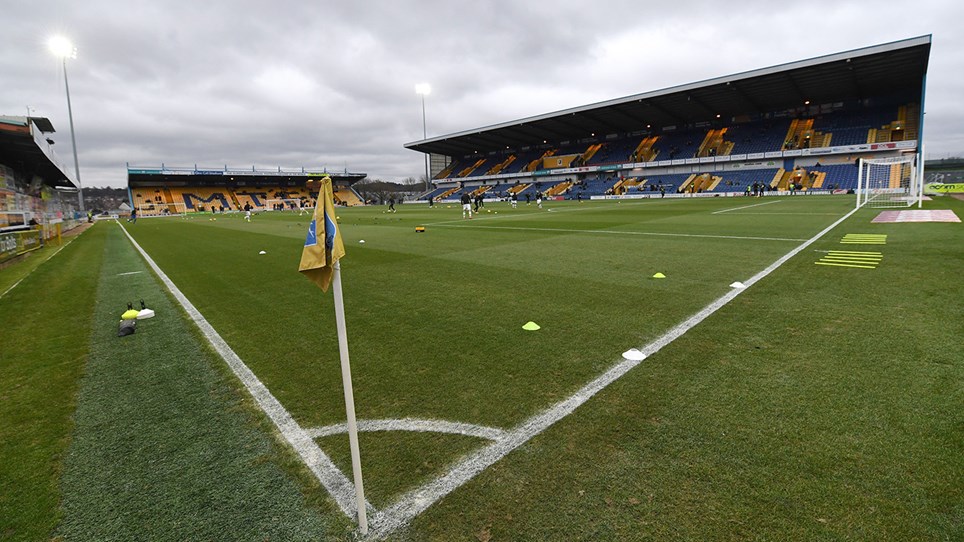 Tickets go on sale for Mansfield away clash


Tickets and coach travel have gone on sale for the Iron's away encounter at Mansfield Town on Saturday, September 7th (3pm kick-off).