Scunthorpe United are delighted to announce the loan signing of Ryan Yates from Nottingham Forest until the end of the season. 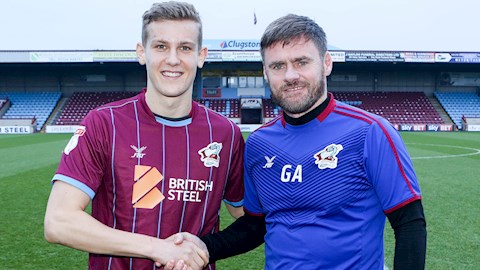 Yates: I can’t wait to get going here

The 20-year-old central midfielder further strengthens manager Graham Alexander’s options in that position, as the Iron prepare for a trip to Portsmouth on Saturday.

Though he hasn’t made a competitive appearance for Forest, it’s at neighbours Notts County where he has shone at the top of League Two this season. Yates scored six goals during 28 appearances in his loan stay at Meadow Lane, including a debut goal in the Carabao Cup first round clash against Scunthorpe at Glanford Park.

Prior to this season, he made 12 appearances during a loan stay at Shrewsbury Town in League One last term and has also enjoyed a loan spell at Barrow.

He takes the number 24 shirt and the deal is subject to EFL ratification.

Want to sponsor new arrival Ryan Yates? We have home and away kit sponsorship available for the midfielder. To enquire, please call 01724 747678 during office hours or email commercial@scunthorpe-united.co.uk.