The Iron will be looking to bounce back with a win when they make the trip to AESSEAL New York Stadium to face Rotherham United on Saturday (kick-off 3.00pm). 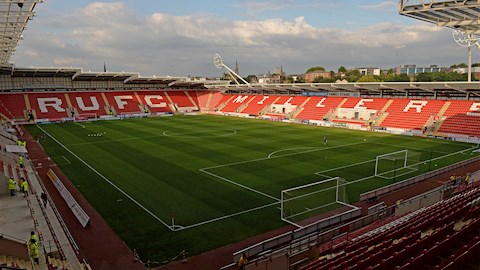 Last time out, Graham Alexander’s side were beaten 2-1 by Wigan Athletic at Glanford Park. Midfielder Funso Ojo netted his first goal for the club in that defeat, but it was not enough to prevent his team from losing.

The Millers, on the other hand, won their match at Rochdale 1-0. A second-half winner from Richard Wood moved his side up to fourth position in League One.

TEAM NEWS…
Alexander confirmed in his pre-match interview that both Charlie Goode and Conor Townsend have returned to training, but he will wait until they are both fully fit before introducing them back into the matchday squad.

However, Tom Hopper, who went off with a knock last Saturday, is a doubt for the match, but Alexander is hopeful he could feature in the squad.

Long-term absentees Jonathon Margetts and Luke Williams will still be out injured.

Since signing last week, Clayton Lewis still needs time to be brought up to speed so he can play competitive games.

PAST MEETINGS…
The two sides last met in 2009 when the Iron won 1-0 in the Johnstone’s Paint Trophy area final, booking their place in the final at Wembley. Striker Gary Hooper got the goal that day to go along with Martyn Woolford’s and Krystian Pearce’s strikes in the first leg.

The Iron last played Rotherham in the league during the 2006/07 season. They won 1-0 with Jermaine Beckford getting on the scoresheet.

ONE TO WATCH…
Kieffer Moore is certainly a player the Iron defence need to keep an eye on at the weekend. The striker, who is on loan from Ipswich Town, has already scored nine league goals this season.

His first set of goals for the Millers came against Southend United, scoring a hat-trick as they run out 5-0 winners in that game.

Moore had previously only played non-league before he signed for Ipswich in January 2017.