Manager Graham Alexander had mixed emotions after the Iron progressed to the next round of the Checkatrade Trophy and finished top of Group H. 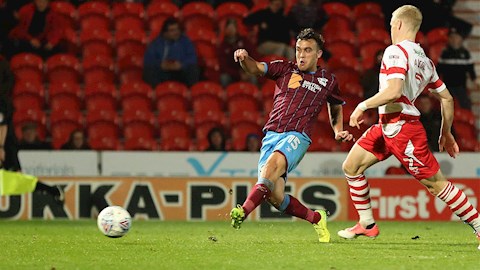 United came back from a goal down to draw 1-1 against Doncaster Rovers at the Keepmoat Stadium on Tuesday night, but lost 3-2 on penalties.

Scunthorpe finish top of their group on goal difference and have a home game at Glanford Park to look forward to in the next round now.

Alexander provided his post-match analysis to iFollow Iron after the game.

ON THE MATCH…
GA: We wanted to top the group and I felt the first two games and two wins gave us a good lead. We wanted to come here and not just win the game and top the group, but put on a performance. Unfortunately, I don’t think we did that – we were expecting better and didn’t quite get to the level of performance we needed to win a game outright over 90 minutes. That’s a little bit disappointing for me because it’s an opportunity for players who are not playing to put on a display to show what they can do. I can’t think of too many who did that. I’m not putting the blanket over the lot of them because half of them approached it right, but that’s not enough to win a game of football. Every time the players pull on the shirt, I want to see a performance. You’re representing yourself as a man and a professional, and anything less than your best isn’t good enough – that’s the thing for me. If you can live with that then I don’t think you’ll have the career you expect, but if you have a professionalism about you and a dedication to your job, then you go out there and do your best at all times – training, games, the lot. You can’t turn it on and off like a tap. I just thought we were a little short today in the mindset, as we approached the game. I’m disappointed in that and disappointed to lose on penalties. We top the group and get a home draw though.

ON CLAYTON LEWIS’ DEBUT GOAL…
GA: We know around the final third he can create and score goals – we’ve seen that in training. We know there’s more to come from him fitness-wise, but if you get him on the ball in good areas, he can produce. It was a real composed finish. I’m delighted for him to introduce himself to the supporters well on the pitch, and he can be happy with that and his contribution. He worked hard to be fair to him. The chances from our side were few and far between. Hakeeb Adelakun came on and lightened us up in the second half, and Duane Holmes as well – coming on and driving us forward. However, attacking-wise, we didn’t create enough opportunities to win a game.

ON LEWIS PLAYING 90 MINUTES…
GA: To get through 90 minutes tonight is really good and we’re pleased with that. We asked how he was with 20 minutes to go, and he was a bit tired but wanted to stay on. To be fair, he was still looking to create in the last ten minutes and wasn’t dead on his feet. There is still more to come from him, and room to improve, but for a debut and his first game in English football, he can be pleased with his performance.

ON THE AWAY FANS…
GA: The fans got behind the boys when they could. I wouldn’t say we gave them too much to shout about on the night, but they still stuck with us and we were disappointed not to win on penalties to send them home happier. We have a home game in the next round now, which is a good thing and a reward for them so they don’t have to travel left, right and centre to get to the next game. It’s at Glanford Park and we will certainly be looking to put on a better performance than we did tonight. I can understand a rustiness if players haven’t been playing regularly, but I still expect better from our group of players.