The Iron are in Checkatrade Trophy group stage action when they visit Doncaster Rovers on Tuesday night (7.30pm kick-off). 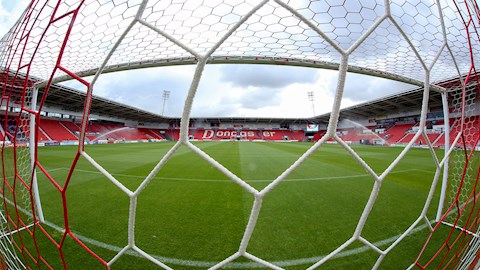 Buoyed by two league wins in succession, United arrive at the Keepmoat Stadium in confident mood, although manager Graham Alexander might freshen up his starting XI ahead of the match.

Both Scunthorpe and Rovers have already qualified for the next stage of the competition after their previous two group stage results. An Iron victory will see them top the group, which also consists of Grimsby Town and Sunderland Under-21s.

TEAM NEWS…
Alexander says he will freshen up the team ahead of the match, and give game time to those players who haven’t played so much in recent weeks.

There could be a debut for midfielder Clayton Lewis, who signed from Auckland City earlier this month and has been getting up to speed with his team-mates during training.

Simon Church could also make his first start in claret and blue after making two substitute appearances since joining 11 days ago.

Neal Bishop is a doubt after limping off in the away clash against Oldham at the weekend, while Andrew Crofts is cup-tied after playing for Charlton in the competition earlier this season.

PAST MEETINGS…
The Iron were 1-0 winners away at Doncaster Rovers in the league back in September, with Lee Novak scoring an early winner.

Both sides had further chances, and Murray Wallace hit the crossbar in the closing stages.

The Iron drew 1-1 away at Doncaster Rovers in the Checkatrade Trophy group stages, but lost 3-2 on penalties.

Despite losing in the penalty shootout, Scunthorpe still finish top of their group on goal difference and progress to the next round alongside second-placed Rovers.

Liam Mandeville fired the hosts into the lead during the first-half, but debutant Clayton Lewis equalised for the Iron with a neat finish. Neither side could find a winner in normal time, with the match heading to a penalty shootout.

Graham Alexander made eight changes to his starting eleven for the match, which included Clayton Lewis’ debut for the Iron and a first start for striker Simon Church. Funso Ojo was the captain.

After a slow start to the match, the first shot of the contest was by Kevin van Veen in the 15th minute. Church was fouled 30 yards out, but the Dutchman’s set-piece curled just over the crossbar.

One minute later, the Iron were on defensive duty when Cameron Burgess blocked a couple of Doncaster shots. They followed that up with solid defending from the resulting corner to keep the score level.

United’s Burgess made another important interception from a Rovers cross, cutting the ball out before it reached the awaiting Andy Williams. The ball then fell to Issam Ben Khemis, who lashed a left-footed volley over the bar.

In the 29th minute, the hosts came forward again, but were kept out by the hand of Rory Watson. Alfie Beestin powered down the right-hand side, before laying it back for Mandeville, seeing his low strike palmed away by the Iron goalkeeper.

Watson was alert again shortly after. Khemis’ strike was down the throat of the ‘keeper, who comfortably gathered it into his chest.

The Iron nearly got the opening goal. However. Paddy Madden got beyond the Doncaster defence on the right wing, delivering a dangerous ball across the goal, but the opposition managed to deflect it away from Church, who was waiting for it at the far post.

It was Doncaster who took the lead in the 37th minute. A quick manoeuvre saw Tyler Garratt drill a pass into the area for Mandeville to hit a low effort under Watson, putting his side 1-0 up.

After the break, substitute Hakeeb Adelakun injected pace into the game and showed it within the first minute. The winger drove into the centre of pitch, striking a powerful shot over the bar.

Nine minutes later and the Iron levelled it up through Lewis with a goal on his debut. The ball broke through the Doncaster backline following a pass from Madden to the New Zealand international, who slotted the ball into the bottom corner of the net to make it 1-1.

Doncaster looked for a reply in the 64th minute. They whipped in a free-kick for captain Mathieu Baudry, but the defender’s header harmlessly went over Watson’s goal.

That was shortly followed up by a shot from Khemis. He shifted the ball onto his right foot, but it caused no trouble for Watson with the strike straight at him.

Lewis was looking for his second of the night when van Veen brilliantly picked him out with a long ball. The debutant controlled it before trying to lob Marko Marosi, but his effort went over the crossbar.

Moments later, Madden also tried to lob the Doncaster goalkeeper. This chance only just went over the bar, with the Irishman hooking it back towards goal after a Rovers defender headed it on for him.

In the 85th minute, Doncaster were close to regaining their lead. Mandeville struck the ball inches wide of the left post, as he looked for his and side’s second of the evening.

Once again, Lewis was involved in action going forward for Scunthorpe, however his long-range free-kick was collected by Marosi low to his left.

This was later followed up by a chance for Madden inside the box. Jordan Clarke raced to the byline to pull back a pass for the striker, who hit it straight at Marosi. The goalkeeper fumbled the ball, but Doncaster were quick to clear.

It was Doncaster who had the last big opportunity to grab a winner just before stoppage time was added on. Khemis worked the ball onto his left foot, driving an effort just past the right post from inside the 18-yard area.

In the dying stages of the game, the Iron came extremely close to winning the game. Adelakun curled in a low free-kick from the left and a Rovers player deflected it goalbound, but Marosi reacted quickly to push the ball wide.

As a result of the game ending as a draw, a penalty shootout (in the new ABBA format) took place to decide which side grabbed an extra point.

Ben Khemis slotted his penalty into the bottom left corner for Doncaster to win 3-2 on penalties.

Iron fans can pay on the night for the Checkatrade Trophy group stage game at Doncaster Rovers on Tuesday, October 31st (7.30pm kick-off).

Tickets are now OFF SALE from Glanford Park. Iron supporters can buy tickets from the Club Doncaster Academy reception, which is next to the away end.

Proof of age may be required on entry for concessionary prices.