The Iron were 6-0 winners against SV Austria Salzburg in their second pre-season tour match. 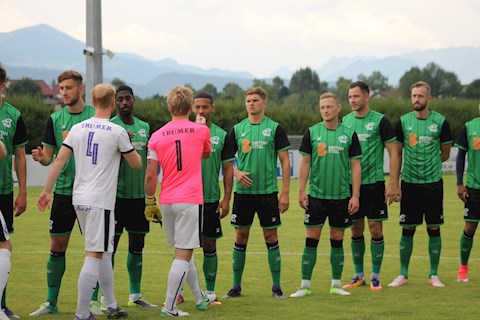 Hakeeb Adelakun opened the scoring for the away side with a volley minutes before Cameron Burgess scored his third in four games from defence. Kevin van Veen then made it 3-0 shortly before half-time.

In the second-half, Adelakun grabbed his second goal with another well struck shot. The demolition was complete with one goal each from Josh Morris and Paddy Madden towards the end of the game.

New signing Funso Ojo was handed his first game in an Iron shirt since joining the club three days ago.

The first chance of the game fell to Scunthorpe after a succession of corners in the third minute, but Charlie Goode’s header was saved by the goalkeeper.

In the 12th minute, the visitors had another opportunity. Jordan Clarke knocked down a long ball to Tom Hopper, who then drove into the area, however his shot was deflected over for a corner.

Three minutes later, Hopper had another half-chance after a cross from Adelakun. The Iron striker was waiting for a tap in but the goalkeeper dived in front of his feet to claim the ball.

Salzburg’s goalkeeper was called into action again in the 21st minute. Adelakun passed to van Veen on the left, who skipped past his man but saw his strike saved.

Moments later, Scunthorpe did manage to beat the ‘keeper and went 1-0 up. Ojo fed the ball down the left to Conor Townsend, who played it first time across goal for Adelakun who volleyed home.

In the 27th minute, the Iron doubled their advantage to 2-0 with Burgess on the scoresheet. Goode flicked on a corner and the summer signing controlled the ball before smashing it low and hard into the goal with his left foot.

Goode nearly had a goal for himself two minutes later. A free-kick was dinked into the area by van Veen and the defender peeled away from his marker, forcing a save from his header.

On 35 minutes, United proved threatening from set-pieces once more. Adelakun took a free-kick on the edge of the area and Rory McArdle rose the highest, although his header went over the crossbar.

McArdle was involved in the action again one minute later. The defender won a header and the ball found its way to Hopper, who beat his man to flick on for van Veen, but the Dutchman’s effort was saved.

Forty-three minutes in – moments after van Veen had just headed wide – Salzburg had their first big chance when they went one-on-one with Matt Gilks, but the goalkeeper came out and dived to the ball.

Shortly before half-time, the Iron made it 3-0 through van Veen. McArdle pinged the ball down the right to Clarke, who controlled it before advancing into the area and squaring it to the attacker, who slotted home with his right foot.

After the break and on 47 minutes, Salzburg could have got a goal back. Goode blocked a goalbound shot and then the striker went clean through, but substitute Rory Watson made a tremendous one-handed save.

In the 55th minute, Salzburg attacked again, however their attempt from the edge of the box was dragged wide of the goal.

Five minutes later, the hosts had another shot from the edge of the area, this time on target, with Watson saving well.

After a short break in play due to thunder and lightning, the Iron went 4-0 up in the 66th minute with Adelakun striking home his second of the game. Wootton drove down the right and played the ball into the area for Adelakun, who controlled and fired into the top left-hand corner.

In the 71st minute, Morris made it 5-0 for the away side. He took a free-kick on the right flank and it curled into the back off the net, going in off the back post.

One minute later and it was 6-0 to Scunthorpe. Levi Sutton overlapped down the right, darted into the area and pulled it back for Madden to slot into the bottom left corner.

The next chance of the game was created by Jonathon Margetts when he got the ball down the right and sent in a cross for Kyle Wootton. He headed towards goal but a Salzburg defender somehow managed to head it over for a corner.

Just before the final whistle, the Iron had one last chance. Morris crashed a free-kick onto the crossbar and Jack Dyche’s headed rebound went wide, which meant the match finished 6-0 to Scunthorpe.