The Iron will be looking to start 2018 with a bang when they host Bury on New Year’s Day (Monday). 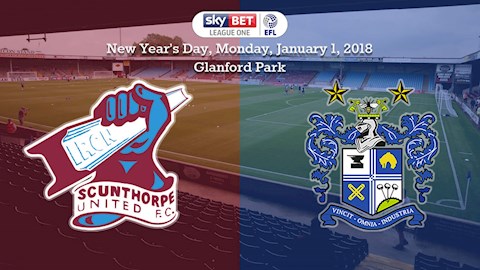 The Glanford Park clash (3pm kick-off) will see United seeking to build on an excellent Christmas period, which has yielded seven points out of a possible seven.

Scunthorpe enter the game following a 2-2 draw at fellow League One high-fliers Blackburn Rovers 48 hours earlier, while the Shakers were beaten 2-0 at home by Fleetwood Town on the same day.

TEAM NEWS…
Midfielder Neal Bishop returns into contention after serving a three-match ban for his red card against MK Dons.

Luke Williams has enjoyed three successive days of training following his recovery from a hamstring problem but is still a few weeks away from a playing comeback yet such is the time he's been out injured.

Andrew Crofts will be out until mid-January with an ankle injury, while Sam Mantom (groin) will be a few more weeks away yet - with Alexander hoping for the end of January depending on how the player's rehabilitation goes.

Rory McArdle (groin) is closest to a return out of the injured players, but will be a week or so away yet.

PAST RECORD…
United won 1-0 at Gigg Lane earlier this season, securing the success through a late Josh Morris free-kick.

The last time the two sides met at Glanford Park, Scunthorpe came away 3-2 winners in January of last season. It was three first-half goals from Harry Toffolo, Stephen Dawson and Josh Morris which won the game for the home side.