Scunthorpe United manager Graham Alexander has confirmed defender Rory McArdle will be the club captain for the 2017-18 season. 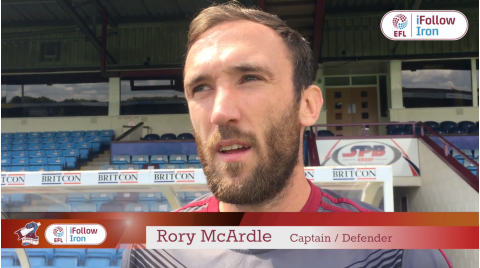 A summer acquisition from Bradford City, the 30-year-old centre-back has been skipper for the majority of United’s pre-season friendlies.

The announcement was made in a live video on the club’s Facebook page on Tuesday lunchtime – www.facebook.com/sufcofficial.

Alexander said: “We thought about it through the summer, and I felt I’d see how pre-season went, in terms of how the players interacted with each other, what I saw on the pitch and in the changing room, before making a choice.

“There were four or five lads who could do this job but we weighed it up and thought the best choice was Rory McArdle.

“I spoke to Rory about it over the weekend, and said I didn’t want him to change at all. The person he is and the player he is, is why I chose to offer him the armband.

“I’ve just spoken to the group of players who were in my thoughts and explained how I see them all as leaders of the group, whoever has the armband on. They’re the boys who have to police the squad, keep the standards high and show everyone what it’s like to play for Scunthorpe United.”

McArdle added: “To be captain on a permanent basis is something I’m proud of, but I’m not going to start changing all of a sudden, just because I have an armband. It’s important to organise, but there will be ten other lads doing exactly the same thing.

“We’ll keep our standards high on and off the pitch. In order for us to succeed on the pitch, it’s important we’re all together and make sure the spirit’s good.”

The season gets underway when the Iron play host to AFC Wimbledon at Glanford Park on Saturday (3.00pm kick-off). Full ticket details can be accessed by clicking here.