The Iron will play their second home league match in a row when Peterborough United are the visitors to Glanford Park on Saturday afternoon (kick-off 3.00pm). 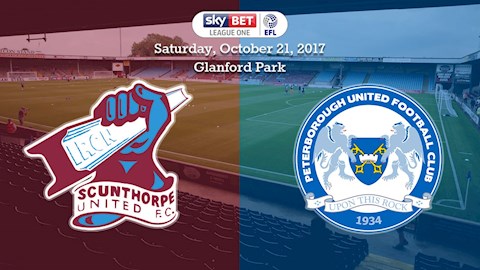 Last time out, United drew 1-1 with Fleetwood Town, with the away side grabbing a late equaliser to cancel out Lee Novak’s earlier strike in the first-half.

Peterborough also drew their last match with the same scoreline. They were behind at Southend United before Jack Marriott scored a leveller ten minutes after half-time.

TEAM NEWS…
Andrew Crofts and Conor Townsend (both hamstrings) will again miss out, with manager Graham Alexander confirming that they are both yet to return to training. Townsend is expected to be out of action for a bit longer compared to his team-mate, being at least one week away.

The same applies for midfielder Sam Mantom (groin), who will not be involved again. He went to see a specialist during the week, with Alexander saying it went well. He is due to go back again for another scan to assess how long he will be out for.

Long-term absentees Luke Williams (hamstring) and Jonathon Margetts (knee) will still be out for a while. Levi Sutton has also picked up a thigh strain.

PAST MEETINGS…
The Iron last met Posh in the first game of this calendar year during last season at Glanford Park. That game finished 1-1 after Josh Morris had opened the scoring late on in the first 45 minutes. The away side got their equaliser in the 83rd minute courtesy of an own-goal by Charlie Goode.

In the same season, Scunthorpe defeated Peterborough 2-0 away from home. Kevin van Veen and Neal Bishop go the goals for the Iron that day.

ONE TO WATCH…
Joint-top scorer in League One, Jack Marriott has been excelling in front of goal for his side since signing from Luton Town in the summer.

The striker has scored ten league goals already, including six in four games during August and the equaliser on Tuesday evening against Southend.

Along with his time at Luton and his current employers, the 23-year-old came through the youth system at Ipswich Town, spending some of the time out on loan at clubs including Colchester, Carlisle and three separate spells with Woking.

The Iron beat Peterborough United 2-1 at Glanford Park on Saturday afternoon thanks to goals from Lee Novak and Josh Morris.

Peterborough scored a goal early on in the second-half against the run of play but Novak was on-target from inside the box to level the scores. Morris then netted the winner from the penalty spot with two minutes remaining.

Graham Alexander named an unchanged starting XI to the one that drew 1-1 with Fleetwood Town on Tuesday.

New signing Simon Church was named on the bench and instantly made a name for himself as he won the penalty that Morris would go on to bury in the bottom left corner to win the game.

Liam Shephard got the first shot of the game as he fired one from just outside the area. However, it went clear of the crossbar.

The Iron made their presence known early on and in the 11th minute as Duane Holmes found Jordan Clarke on the right through some clever play. The right-back curled a cross into the box and it forced a desperate diving header from ex-Newcastle United defender Steven Taylor to clear it.

Only four minutes later Holmes forced another clearance from Taylor as he crossed from the right-wing. The 22-year-old found the back post but Taylor volleyed the ball away for a throw-in.

A Marcus Maddison free-kick from the left-flank caused some danger. The ball was sent towards the far side of the 18-yard box and it caused a scramble in the box. However, Matt Gilks was the player that got the final and all-important touch on it to send it over the bar.

In the 16th minute, Holmes caused more problems for the Posh as he turned and shot just inside the box. He could only guide it wide though.

Following this, there were claims for handball on the line for the Iron. In the 18th minute Novak chipped the ball to the back post where McArdle was waiting. The defender headed it at goal but the referee ruled that it hadn’t crossed the line thanks to the Posh interception.

Maddison reminded the Iron that Peterborough were here to play with 15 minutes left before half-time as he fired a 20-yard shot at goal. The ball never touched the floor but it did touch Gilks’ hands as he caught it comfortably.

In the 37th minute, Gwion Edwards was found in the middle of the park as Maddison flicked the ball onto him with his heel. The midfielder struck the ball from 20 yards out but it was blocked before it could cause Gilks any problems.

Maddison looked to send his side into half-time 1-0 up as he put a threatening ball across the face of the goal with only five minutes left to play. However, no-one was there to meet it.

The Iron still had one last chance left in their locker as well though, as Madden won a corner from a volleyed effort he had in the box. The ball deflected for the set-piece and Morris took it short to Holmes. Morris received the ball back and ran into the right side of the box before shooting. He curled it towards the left side of goal but it was headed away by the Peterborough defender.

Unfortunately for the Iron, Funso Ojo’s late effort from outside the box couldn’t quite dip enough to be on-target. The midfielder received the ball as it bounced off the back of Madden inside the box.

The Iron started well in the second-half. Confusion between the Posh defence led to Morris being through on goal within three minutes. The midfielder ran onto the ball and took a shot but it went over the crossbar.

Only a minute later Adelakun sent a threatening cross into the box from a corner. Madden just got his head to it but couldn’t quite get enough to send it goalwards.

The Irish striker was unlucky not to score in the 50th minute as well, as he connected with a Jordan Clarke cross. Adelakun found the oncoming Clarke on the right-wing and the right-back crossed the ball first-time into the box. It landed just outside the six-yard box but fell awkwardly for the striker.

It was Andrew Hughes that put the visitors ahead though against the run of play. Maddison delivered a corner into the box and Hughes volleyed it home from the back post.

Only minutes later, the Posh started to apply more pressure and Marriott came close as he slid in to meet a long-range cross. However, he couldn’t quite get there in time.

The Iron still continued to push for a goal as Morris delivered an inviting ball into the front post. He crossed the ball with his first touch from the left-wing and Novak made an impressive run to be able to connect with the ball. However, he couldn’t quite direct it on-target.

Clarke had a fantastic effort on goal in the 58th minute. The right-back was found on the edge of the box on the right-hand side. He controlled it and hit the shot on the half-volley but sent it just wide into the side netting.

Adelakun looked impressive after coming on, and his corner in the 67th minute forced a save out of the ‘keeper. He led the second phase of play from the following corner as well and was unfortunate not to find anyone with his diagonal ball into the box.

Neal Bishop tried for a spectacular effort in the 72nd minute. The 36-year-old had the ball drop to his feet in the middle of the park. He took one touch and then volleyed it from long-range. It looked to be dipping but it didn’t dip enough as it ended up going clear of the crossbar.

There were penalty shouts as Kevin van Veen looked like he’d been brought down inside the box. However, the referee ruled that it wasn’t a foul.

Simon Church came onto the pitch to make his debut and seconds after coming on almost made himself a hero. The new signing ran onto a low ball from the left flank but couldn’t quite connect with it.

The Iron seemed to have a second wind as they applied pressure onto the Posh defence for the next couple of minutes and it paid off. Lee Novak headed a cross from Adelakun into the back of the net to level the scores.

Novak and Church linked up well in the 83rd minute. The goalscorer laid off the ball in the box for Church to run onto and strike. The new-signing curled the shot on-target but was denied by Posh ‘keeper Jonathan Bond.

Church then rounded the ‘keeper in the 87th minute and was brought down in the box by Bond. Morris stepped in front of the penalty spot and buried it into the bottom left corner of goal, putting the Iron 2-1 up.

Adelakun almost made it three as he weaved his way into the box past multiple defenders and got his shot away. He fired it on-target but Bond got down to meet it.

The Iron looked inspired by their lead and confidence was brimming within the side. Bishop tried a shot from over 20 yards out and only just sent it wide of the left post.

The Posh couldn’t break down the Iron’s defence and the home side were the winners as the final whistle was blown.

Save money by purchasing your Iron v Peterborough United tickets in advance! Tickets are on sale now!

Supporters can buy at Early Bird prices until the ticket office closes on Friday, October 20th at 5pm, and also until three hours before kick-off online via our ticketing website (www.sufctickets.com). Matchday prices then apply.

Fans are able to pay on Turnstiles 2A and 2B for the Britcon Stand, and also Turnstile 5A for the Clugston Stand. Please note, matchday prices apply though.

United's encounter against the Posh is a Category A fixture.


Save money by purchasing your Iron v Peterborough United tickets in advance! Tickets are on sale now!