The Iron drew 0-0 in their FA Cup first round clash with Northampton Town.

Graham Alexander made only one change to the team that beat Oldham Athletic 3-2 last weekend, as Neal Bishop was replaced by Andrew Crofts.

Early on, in the second minute of the game, Tom Hopper was brought down and a free-kick was given just outside the box on the left-wing. Hakeeb Adelakun took the shot as Morris provided the diversion but the winger couldn’t keep it below the crossbar.

Adelakun made another chance for himself only five minutes later. He found himself in some space in the centre of the pitch and had a shot from outside the box. However, he dragged it wide of goal.

The Cobblers fans felt hard done by just shy of ten minutes into the game. Lewis McGugan took a corner from the right and found Aaron Pierre at the back post. His headed effort hit the crossbar, hit the goal-line and then bounced out away from goal.

Only a minute later it was McGugan’s chance to come close. He took a free-kick from 20 yards out and was denied by the post.

Corners seemed to be proving fruitful in this game as the Iron had a dangerous one of their own. Morris took it and floated the ball into the path of the incoming Jordan Clarke. The right-back volleyed it from three yards inside the box and forced an impressive save out of the Cobblers' goalkeeper David Cornell, which denied him a contender for goal of the season.

Lewis McGugan got a free-kick in almost the exact same place in the 16th minute. The midfielder struck it sweetly but this time was denied by Matt Gilks.

After a period of end-to-end football Regan Poole came close, but his volley bounced wide of the right post.

A couple of minutes later, the set-pieces started to flood in as Lewis McGugan had a free-kick denied by the Iron’s leaping wall. From the resulting corner, Northampton had another goal denied by a clearance on the goal-line. This time, Crofts was the hero as his header kept the scores level.

The Iron had a chance of their own not too long after though. Josh Morris slipped past the defensive line to drive up the left-wing. Hopper couldn’t quite get to the ball that the winger squared across the box. However, Adelakun was there to run onto it and take the shot but he couldn’t keep it low enough to hit the target.

Murray Wallace did well to clear the ball from McGugan’s last free-kick of the half. It fell at the back post but the defender was on hand to beat his man and head it clear of danger.

After such an attack-heavy opening to the first-half, the last ten minutes didn’t provide many chances as both teams looked strong defensively.

With three minutes on the clock, Lee Novak did well to bring the ball out of the box and pass it on for one more Iron attack. However, it didn’t end up on-target.

Finally, with one minute left to play, Sam Hoskins had the Cobblers’ last shot from inside the box denied by Cameron Burgess.

Murray Wallace showed his class in the second-half as soon into the first-half he intercepted a dangerous looking cross from Chris Long that travelled across the 18-yard box.

In the second phase of play, Northampton won a corner which was taken by McGugan once again. The midfielder, who had been frustrated in front of goal all game, was denied once again by Tom Hopper’s head as he rose up from the wall.

There were positive signs in attack in this second-half. Adelakun was unlucky in the 51st minute as he floated a cross over to an unmarked Lee Novak at the far end of the box. Unfortunately, the striker couldn’t quite run onto the ball in time to capitalise on it.

Shortly after, Funso Ojo tried to play Novak in again from long-range but his pass was intercepted by the Northampton defence.

Northampton’s skipper Marc Richards came on in the second-half and came close to grabbing a goal in the 58th minute. The experienced striker was found in the box by McGugan’s corner ball but he couldn’t hit it on-target.

He got his second chance of the game only a minute later, as Buchanan found him at the back post but he failed to hit the target once again.

For every problem McGugan’s free-kicks raised, the Iron seemed to have a remedy. Just after the hour mark, the midfielder had yet another set-piece but was denied this time by Rory McArdle.

Great drive and determination from Funso Ojo ended up winning the Iron a chance in the 67th minute. The midfielder chased after what looked like a lost cause as the Northampton defender looked comfortable in possession. However, he blocked his options and deflected the ball to Novak. The Iron striker played in Morris outside the box and he struck the ball sweetly at goal. However, it was denied by a desperate diving save from Cornell.

With just over ten minutes left in the game, Kevin van Veen made his impact off the bench. The striker had drifted onto the right-wing with the ball and chose to cross it into Morris. It was a good effort but the winger couldn’t quite generate the power needed to beat the ‘keeper.

In the last minute of normal time, Rory McArdle performed the heroics as he slid in to intercept a cross from the right flank inside the box to help to keep that clean sheet.

In a last ditch effort to grab that all-important goal, Josh Morris drove into the box from the left-side and had his shot deflected for a corner. From the resulting set-piece, Cameron Burgess leapt higher than anyone else in the box to head the ball but sent it just wide of the right post.

After the game finished level the Cobblers will now travel to the Glanford Park for a replay.

The Iron have been handed an initial allocation of 400 tickets for the South Stand, and these are on sale now.

Fans are also able to pay on the day, at a ticket booth next to the away end (cash preferable). Supporters can then take a ticket to the turnstile.

We’ve been told to make supporters aware that proof of age may be required on entry for concessionary tickets.

Tickets remain on sale for the fixture until 2pm on Friday, November 3rd, 2017.

IN PERSON
The Glanford Park ticket office is open at the following times:
> Friday 3rd November - 8.30am to 5.00pm (Northampton FA Cup tickets on sale until 2.00pm) 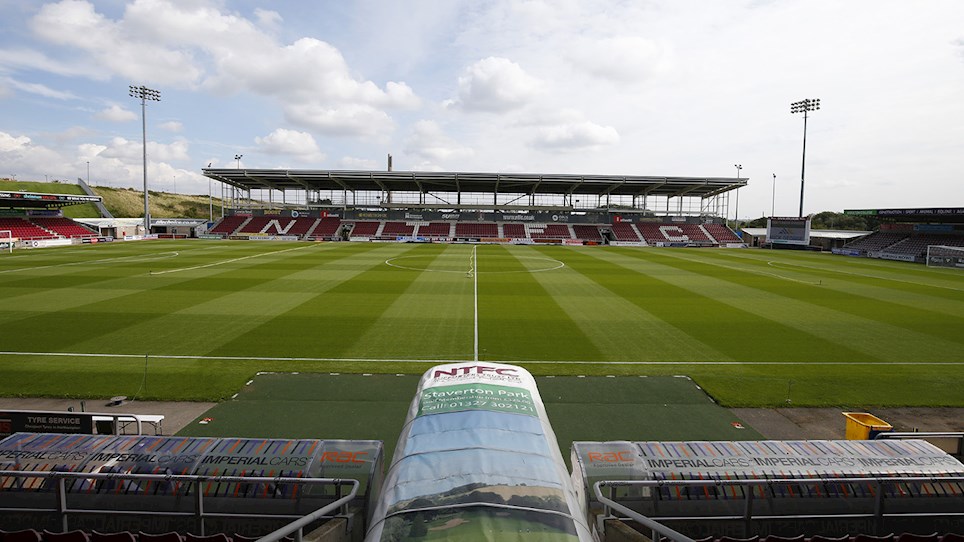