The Iron travel to the Kassam Stadium on Good Friday to face Oxford United in Sky Bet League One (kick-off 12.45pm). 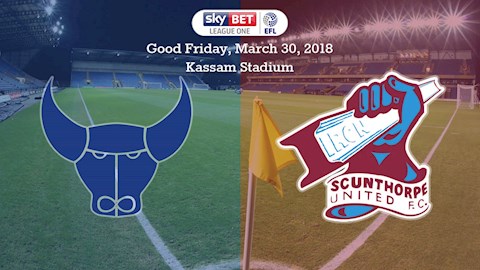 On Saturday, United drew 1-1 versus Rochdale at Glanford Park. They fell behind in the first-half, but an Ivan Toney header in the second drew the two sides level.

Meanwhile, Oxford were heavily beaten 3-0 at Portsmouth on Sunday in Karl Robinson’s first game in charge of the U’s.

TEAM NEWS…
Right-back Marnick Vermijl (hamstring) has taken part in training this week, as has striker Lee Novak (heel) and midfielder Luke Williams (scar tissue injury) as they step up their recoveries. The Good Friday game will come too soon though.

ONE TO WATCH…
Midfielder Ryan Ledson attracted interest from a number of Championship clubs and is certainly a player to watch out for on Friday.

The 20-year-old joined Oxford in at the beginning of the 2016-17 season on a three-year contract from Everton, and has since played 71 times for the U’s, scoring four goals.

Ledson played just one game for the Premier League side, starting in their 1-0 loss against FC Krasnodar in the Europa League.

Scunthorpe drew 1-1 away at Oxford United on Good Friday. 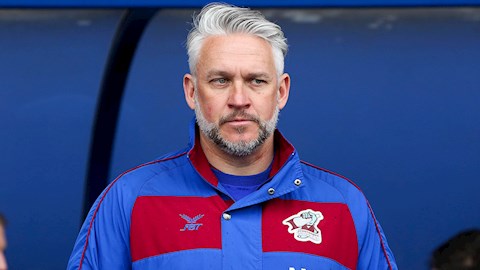 Daws reacts to draw at Oxford

Ivan Toney struck the Iron into an early lead during a first-half they dominated, but James Henry’s penalty kick not long after half-time restored parity.

The away side started well and attacked their hosts, with Adelakun using his skill on the right flank to win a corner.

Then, from the subsequent set-piece, Duane Holmes found the ball cleared to him on the edge of the box. He unleashed a shot which cleared the crossbar.

Soon after, Adelakun sprayed the ball to Townsend, who then looked to play Josh Morris through but Oxford goalkeeper Simon Eastwood was quick out to stop.

The seventh minute saw an excellent save from Matt Gilks. Ryan Ledson played a ball forward to Wes Thomas, who struck it first time, but the Iron goalkeeper dived to his left and tipped the ball wide.

Just a minute later, Townsend came close. Adelakun played it wide left again to Morris, pulling it back for Townsend, who curled a long-range effort just over the bar.

It was in the 12th minute when Scunthorpe took the lead. Adelakun unleashed a stinging low shot which Eastwood tipped out and Toney was there in moments to strike home his fifth goal since rejoining the club on loan from Newcastle United.

The Iron came forward again on 17 minutes as Toney sent through Holmes, who then played it wide to Morris but the winger’s cross was cut out.

Another chance came the way of the away side on 20 minutes, as Adelakun came close to scoring. Morris’ cross from the left-wing went through a number of bodies and reached his fellow winger at the back post, who volleyed the ball just over.

With 22 minutes on the clock, Scunthorpe kept up the pressure as Holmes drove forward with the ball before playing in Morris down the left side of the area, whose low shot was saved by Eastwood.

Two minutes later, Holmes was involved again as he struck the post. He played a one-two with Toney before hitting a shot from the edge of the area which cannoned back into play.

The great start continued as Scunthorpe then had an effort cleared off the line, by the chest of Henry. Adelakun delivered a fantastic corner, which caused the U’s problems. McArdle headed the ball but it was blocked away on the line.

There was more input from Adelakun on 31 minutes, as he ghosted into the box and then played the ball across goal for Toney. However, it was touched away from the frontman by a defender.

Six minutes later, Scunthorpe had one cleared off the line again when Morris’ cross from the left reached Clarke at the far post, but the right-back’s header was kicked away after almost reaching the back of the net.

The 39th minute saw yet another Iron chance, as Holmes forced Eastwood into a save. Toney played a first time pass wide to the attacker, who advanced with the ball and fired towards the left corner.

Then, just before half-time, Murray Wallace sent an effort just wide of the post. Adelakun swung in a corner, which Clarke headed back across for the Scot, who stretched a foot out but struck wide.

The Iron had a goal disallowed for offside during the third minute out of four in first-half stoppage time. Adelakun struck from distance, and it was parried by Eastwood. Morris was then flagged offside, before Toney tapped it into the empty net.

On 51 minutes, a Ryan Yates shot from outside of the 18-yard box was deflected, before Eastwood caught the ball.

Referee Darren Drysdale pointed to the penalty spot on 55 minutes as an Oxford player was adjudged to have gone down in the penalty area. Henry scored from the penalty. He sent Gilks the wrong way and placed the ball into the bottom right corner.

Two minutes later, there was a great block from Wallace to deny Malachi Napa, who hit the ball from the edge of the box, but the centre-half slid and blocked the ball.

Scunthorpe were back on the attack in the 61st minute. Yates put the ball into a dangerous area. It found Townsend, but Eastwood was out quickly to block his effort and save for Oxford.

The Iron then hit the woodwork again on 64 minutes, as a Morris free-kick was cleared only as far as Adelakun. The attacker shifted the ball onto his left foot and curled the ball onto the crossbar, before it bounced out for a goal kick.

Soon after, there was a change for United as Marnick Vermijl came on for Clarke.

The next chance of the game came the hosts’ way on 73 minutes, as Ledson struck an effort high and wide. Then, ten minutes later, Henry curled a shot straight at Gilks as the game continued to be a tight affair in the second period.

There was a double Iron alteration late on, as Lee Novak and Cameron McGeehan were brought on for Holmes and Adelakun but, despite four minutes of stoppage time, it continued to be a cagey end to the match.

Ruffels had the only late chance for the hosts, shooting straight at Gilks, while Morris turned and fizzed an effort over the crossbar for Scunthorpe. The scores finished level.

Iron fans can pay on the day at Oxford United on Good Friday.

Tickets will be available from the North Ticket Office, adjacent to the visitors' turnstiles on the day. This will be CASH ONLY. 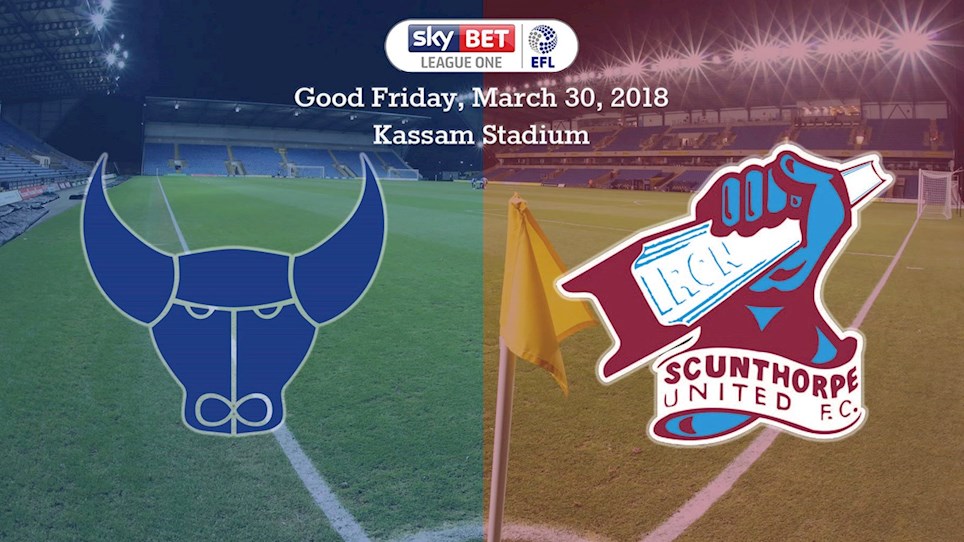