With United making the trip to take on Barrow this Tuesday night, we take a look at their season so far.

They come into the match sitting 13th in the division, following a start to the league campaign that has seen them win four, lose four and draw four.

Barrow let a lead slip to be defeated 3-1 away at Port Vale on Saturday.

Banks, returning from suspension, struck a ferocious low effort from 20 yards beyond Vale goalkeeper Lucas Covolan to give the Bluebirds the lead before half-time.

But the rampant hosts came out firing and completed the turnaround with two goals inside 11 second-half minutes.

Substitute striker Politic rounded Bluebirds goalkeeper Paul Farman for the equaliser shortly after the break before David Worrall's cross was bundled in for an unfortunate own goal by defender Jones after 56 minutes.

Benning added the decisive third goal after his own swerving volley struck the woodwork and he remained composed to finish.

Barrow appointed former Forest Green boss Mark Cooper as their new manager on a three-year deal during the summer.

The 52-year-old departed Rovers in April after five years in charge, and brings a wealth of experience to the role having managed over 400 games at EFL level during spells at Peterborough United, Swindon Town, Notts County and Forest Green Rovers.

The Bluebirds avoided relegation back to the National League in 2020-21 in a season where they parted company with both David Dunn and Michael Jolley as manager.

"As soon as we knew of his interest, we ensured that we pulled out all the stops to bring him to the club," chairman Paul Hornby said.

"Mark's experience was just what we were looking for in this league. It really feels like a huge step that Mark considers Barrow can match his own ambitions for success and it shows how far we've come and that we're moving in the right direction." 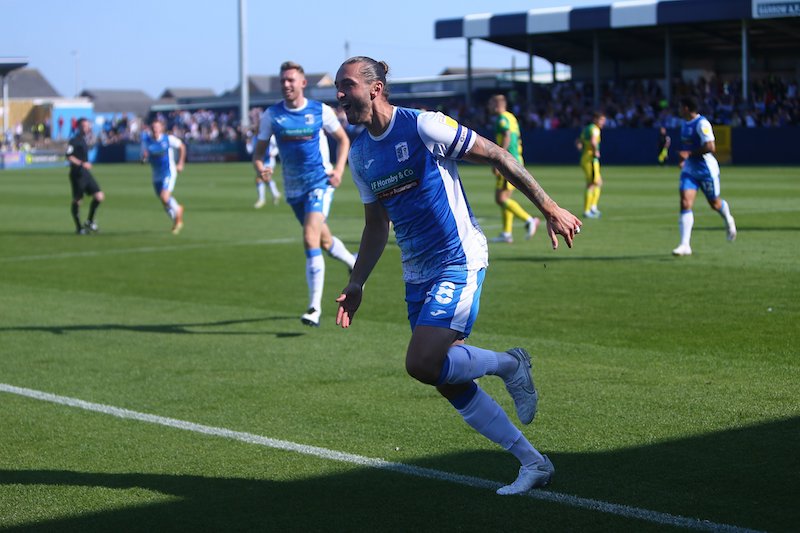 Midfielder Ollie Banks is the present top scorer, with five league goals to his name so far this season.

The 29-year-old scored in the matches against Bristol Rovers, Oldham, Colchester, Mansfield and Port Vale.

Talented midfielder Banks became a Barrow player in January 2021 when he put pen to paper on a deal with the Bluebirds after leaving Tranmere Rovers.

Banks initially came through the ranks at Rotherham United where he turned professional and scored on his senior debut in 2011, before playing at non-league level for the likes of Gainsborough Trinity, Scarborough Athletic and FC United of Manchester.

However, in 2013 he jumped back in to the EFL with Chesterfield where he spent three years before moving on to Oldham Athletic in 2016 where he notched up yet more senior experience prior to linking-up with Tranmere.

He is most at home in the centre of midfield from where he can score and create.

Goalkeeper Paul Farman, defenders Patrick Brough and Remeao Hutton and forward Josh Gordon are the Barrow players who have started every league game so far this season.

Barrow have two familar faces amongst their ranks, with ex-Iron shotstopper Josh Lillis as goalkeeping coach and registered as a player.

Lillis, now 34, joined after leaving Rochdale in the summer of 2020 but has made only four appearances in all competitions.

The former trainee made a total of 50 appearances for United before leaving in the summer of 2012, and then spent the next eight years at Spotland.

They also have left-back Kgosi Ntlhe, who also joined last summer. He has made six appearances in all competitions so far this campaign, and he is presently missing out with a knee injury. The South African has made a total of 32 appearances for them, after making 21 in his one season stint with Scunthorpe in 2019-20.