Scunthorpe United is delighted to announce midfielder Tom Pugh has signed a new one-year contract, with a further 12 months in the club's favour. 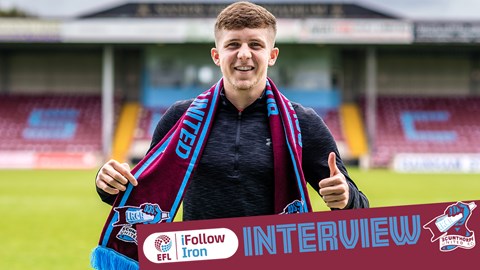 The 20-year-old became a professional in the summer of 2019. Formerly of Leeds United, he is a central midfielder who is also capable of playing right-back.

Pugh, who has won two caps for Wales Under-21s, made his Iron senior debut as a substitute in a Checkatrade Trophy clash against Mansfield during November 2018 while still a youth trainee.

The 2019-20 season saw two more first team appearances, as a substitute against Sunderland in the same competition and then in the league clash at Swindon Town. He impressed for the Under-23s that campaign and in the few matches at that age group this season too.

2020-21 saw four further first team cup appearances, including starts in the Papa John's Trophy against Lincoln and Mansfield, before he came on as a substitute in our final league match of the season against Stevenage.

Pugh told iFollow Iron: "I'm really happy to have got it signed. I'm looking forward to coming back fit and firing in pre-season. The manager's told us to come back as fit as we can, and to be ready to kick on for next season.

"There will be new faces, and we're looking forward to gelling together and giving it a good go.

"I want to play as well as I can, get as many minutes under my belt and see what it brings. It's class to play for the first team, it's what you dream of when you're younger, and to have your family supporting you and making them happy is a great feeling. Now I've got to build on this and really push on."

See much more from Tom Pugh on iFollow Iron.