David Rock will be the man in the middle for the Iron's home league encounter against Bradford City on Saturday. 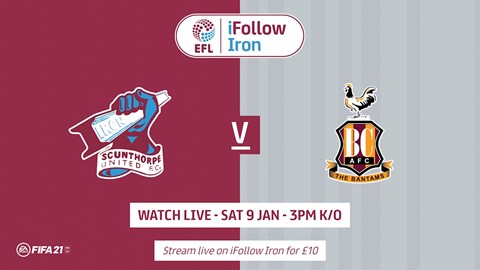 The Hertfordshire-based official will travel to the Sands Venue Stadium for his 17th game of the season and his sixth in Sky Bet League Two. The current campaign is Rock's second in the EFL after being promoted ahead of the 2019-20 season.

His first game of the campaign was the Carabao Cup match between Crawley Town and Millwall which ended 3-1 to the Lions. He showed one yellow card in the match. Meanwhile, his latest match League Two goalless draw between Colchester United and Cheltenham Town on December 29th. Two cautions were issued on the night.

He has been involved in one previous Iron game, which came earlier in the campaign away at Exeter City. One yellow card was issued in the game, to Aaron Jarvis, in what was a patched up Scunthorpe side ahead of their next three games being suspended due to a COVID-19 outbreak.

Meanwhile, he's yet to be involved in a game with Bradford City, so Saturday will be the first take he's taken charge of the Bantams.

On Saturday, he will be assisted by Stephen Wade and Oliver Bickle, while Alistair Nelson has been appointed as the fourth official.