After over three weeks without being able to add to the nine points haul gained in the space of six days at the end of January, the Iron are looking forward to finally being able to return to action against Harrogate Town this Saturday (3pm kick-off). 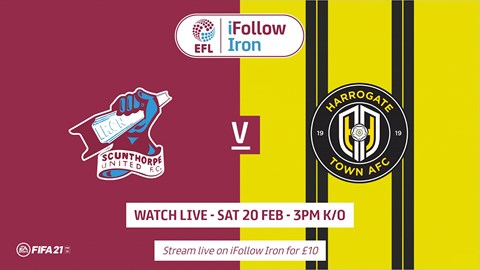 Scunthorpe enter the match bidding to win their fourth match in succession, and if they do so, it should propel them away from their present position of 20th.

There are 20 games remaining and they will come thick and fast over the coming weeks as Neil Cox's side look to build on the momentum of victories over Grimsby Town (3-0), Port Vale (2-0) and Colchester United (1-0) at the end of last month.

The home game against Oldham Athletic on Saturday, February 6th was postponed due to a waterlogged pitch, while the encounter against Bradford City at the Sands Venue Stadium three days later was abandoned after half an hour due to heavy snow and player safety concerns. Then, last weekend's away fixture at Morecambe was postponed due to a frozen pitch at the Mazuma Stadium.

Midfielder Jem Karacan has trained fully and will be assessed after recovering from a shoulder injury sustained in the win at Colchester.

Defender Harrison McGahey (hamstring) will miss out though, but is set to return to full training on Saturday morning.

Elsewhere, striker Kevin van Veen has had another full week of training after returning to the substitutes' bench for the abandoned game against Bradford City last week.

Right-back Jordan Clarke is back in full training ahead of schedule following a thigh injury and will also be looked at prior to the game.

Midfielder George Hornshaw, who has played at right-back this season, has suffered an ankle injury in training and is waiting to hear the full extent.

Harrogate sit 13th in the table heading into this weekend, and were 1-0 winners in a home fixture against promotion hopefuls Carlisle United on Tuesday night.

They've picked up some decent results this season, including a 2-1 home success against another team looking to go up in Newport County last month.

Their last away win came at Crawley Town earlier this month, when they emerged 3-1 victors.

Top scorer for them is former Iron trainee Jack Muldoon, who has 11 goals to his name. He's also set up another four. After leaving us, he subsequently represented Brigg Town, Sheffield, Glapwell, Alfreton Town, Stocksbridge Park Steels, North Ferriby United and Worksop Town. With the latter he scored 21 league goals during the campaign, attracting interest from Football League clubs. He went on to play for Rochdale, shine at Lincoln City and continue his progression with AFC Fylde and Harrogate.

In our only ever past meeting, the Iron claimed a comfortable 5-2 League Two victory at Harrogate Town in December to match their best run of consecutive away league wins since 1997.

Abo Eisa netted a brace after claiming an assist for Emmanuel Onariase’s opening goal for the visitors, which was cancelled out by Jack Muldoon’s strike for the hosts.

Striker Ryan Loft and substitute Aaron Jarvis also went on to score as Neil Cox’s men wrapped up a third-straight victory on the road despite Connor Hall’s stoppage-time reply.