Midfielder Alfie Beestin has spoken to iFollow Iron about our last game, which saw us edged out 2-0 at Bolton Wanderers, and has also previewed the home encounter versus Cheltenham Town this Saturday (3pm kick-off). 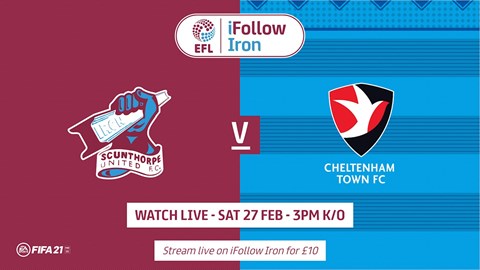 Reacting to Tuesday's match at the University of Bolton Stadium, he told iFollow Iron: “It was a difficult game to go into and it’s frustrating to get beaten because we were on a good run of form. We’ve now got to focus on bouncing back from that and getting back to winning ways.

“We knew that we were not at our best, especially in the first half. I thought that in the second half we performed better and take that into the next game.”

Despite the challenges of the game; Beestin chose to focus on the team's progression, commenting: “I think at the start of the season we were struggling defensively. I think it was massive to have three games with clean sheets and to concede from a penalty that wasn’t even a penalty against Harrogate.

United faced another controversial penalty on Tuesday for which the decision again wasn't in the team's favour, and he said: “I don’t think penalties have gone our way this season and I don’t think we’ve had many. We’ve just got to keep going and hopefully we can get a penalty to go our way.”

Beestin mentioned he wasn’t happy with his own performance on Tuesday, and said: "I felt like I could have been a lot better. I won’t let it get to me and I need to keep working hard and trying to get as many minutes as I can while helping my team.”

Talking about the competition in the squad, Beestin said: “Spenno (Lewis Spence) the other day came on and scored a worldie of a goal and I thought he did well against Bolton too. We know in the middle that your place isn’t certain and you have to keep working hard in training and games. Hopefully, then you’ll get the spot.”

Looking ahead to Saturday's game against Cheltenham, he said: “We’ve just got to get back to how we were for the previous four games and the second half in the Bolton match. Now we're focusing on the next game, forgetting about Bolton and moving on to Cheltenham.

“The next few games are tough. We just want to win every match and we know that anyone can beat anyone in League Two. Anyone in this league is a tough game. We just have to keep doing our thing, getting a few more wins and push on."

See much more from Alfie Beestin on iFollow Iron.