Defender Jacob Bedeau has spoken about preparations for the home encounter against Tranmere Rovers on Saturday. 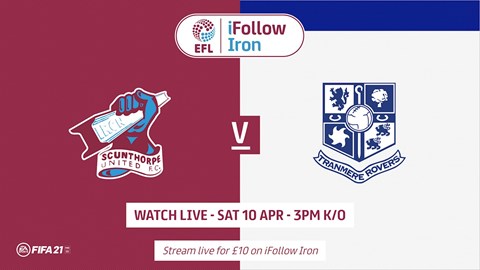 The 21-year-old was left disappointed with the 2-0 loss away at in-form Carlisle United on Tuesday night, but he is keen to fight back on Saturday and come out on top.

Talking to iFollow Iron, he said: “I think we have done alright as a team, and I think I’ve played okay myself as well. We were five unbeaten before going into that Carlisle game, so I think the momentum slowed with that result, but hopefully we can get back to how we want to play on Saturday.

“There are eight games left now, and we have got to push on and try and finish as high as possible in the table."

It will be a tough task against Tranmere, who sit third in the division, but Bedeau can take encouragement from the win against table-topping Cambridge United last month.

He added: “I think going away to Cambridge and beating them down there was good, and we have picked up other good results this season too. We are capable. Getting those results against sides like that shows that we can compete against the stronger teams in the league.

“If you look at the players we have got up top, there is a lot of speed and they can run with the ball really well, like Gilly (Alex Gilliead), Eisa (Abo Eisa) and Dev (Devarn Green). So getting those types of players on the ball will be important at the weekend.

“Tranmere are a good team. I remember playing them at their place and they are an experienced side. They are pushing for automatic promotion and they had a bad result against Cheltenham recently (losing 4-0 at home), but we will be trying to push on, so it will be a tough match.”

Bedeau has been back in the team since the start of March and has appreciated being a mainstay of the line-up since. He said: “It’s really good to be back in the side, and there are a lot of good other centre-halves in the club, and Jordan (Clarke) has obviously showed what he can do there as well. So there is good competition for places with those spots, but I’m just happy to be back playing.”

He concluded: “When you’re playing week in and week out it's about keeping the momentum going. I think as a team we have coped quite well with it, and everyone has been involved and played their part. Hopefully we can keep trying to push on."

See much more from Jacob Bedeau on iFollow Iron. Click here to get your iFollow match pass for the Iron vs Tranmere Rovers.