The Iron host Grimsby Town for the first time in the league for 16 years on Saturday, in all ALL-TICKET home League Two encounter that kicks off at 1pm.

Grimsby home game made ALL-TICKET - get your tickets

Coming into the game following Tuesday's 2-0 defeat to league leaders with a youthful line-up, Scunthorpe come into the derby match in good spirits and hoping to make it three wins in all competitions against the Mariners this season.

Prior to the midweek game, United came from behind twice to draw 2-2 at play-off chasing Port Vale and were 1-0 victors against Forest Green in our last home match.

The Mariners come into it on the back of two 3-0 defeats to promotion pushing teams, at home to Northampton Town last Saturday and away at Plymouth Argyle on Tuesday night. They were 4-2 winners against Newport County the prior Tuesday. 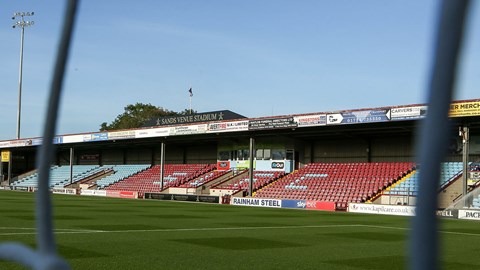 Extra searches in place this weekend

Abo Eisa (hamstring) and Kevin van Veen (groin) will be given every chance and a decision won’t be made on the attacking pair until Saturday after coming off at Port Vale last week and then missing the Swindon game.

Defender Harrison McGahey is slowly recovering from concussion, but received the all-clear after a brain scan last Friday. “He is progressing and moving in the right direction though,” said Russ Wilcox.

“Junior will hopefully get some minutes for the Under-23s at Rotherham on Tuesday,” said Wilcox.

Elsewhere, Jordan Clarke could return sooner than originally anticipated from a calf injury, as he was originally out until late April.

Wilcox said: “He is back on the grass and up to speed. He now just needs some contact."

Meanwhile, Kgosi Ntlhe is still out with an Achilles injury and could miss the rest of the season.

“He’s had a setback with his injury so has had a small operation to rectify an issue around his Achilles. With only seven weeks left of the season, he’s probably going to struggle to get back before the it ends.”

Regan Slater (recovering from an ankle injury) is set to return to action for Sheffield United Under-23s on Friday, and it is hoped he will play for ours at Rotherham next week before then appearing for the Blades again at the end of next week.

Alfie Beestin (hamstring) is back on the grass jogging and isn’t too far away, as is Jordan Hallam (hamstring).

Devarn Green missed out on Tuesday with a dead leg and should be fine for Saturday.

Kevin van Veen has been the match-winner on two occasions so far this season against the Mariners, netting a brace in the 2-1 Leasing.com Trophy group stage win in September and then notching the winner at Blundell Park in December.

Our last home league match against Grimsby came in November 2004, with Paul Hayes scoring a brace in a 2-0 home win.