Born and raised in Scunthorpe, Christian Ashton has travelled far and wide supporting the Iron. Since his father took him to one of the final few home games at the Old Show Ground, Christian has been hooked for decades. 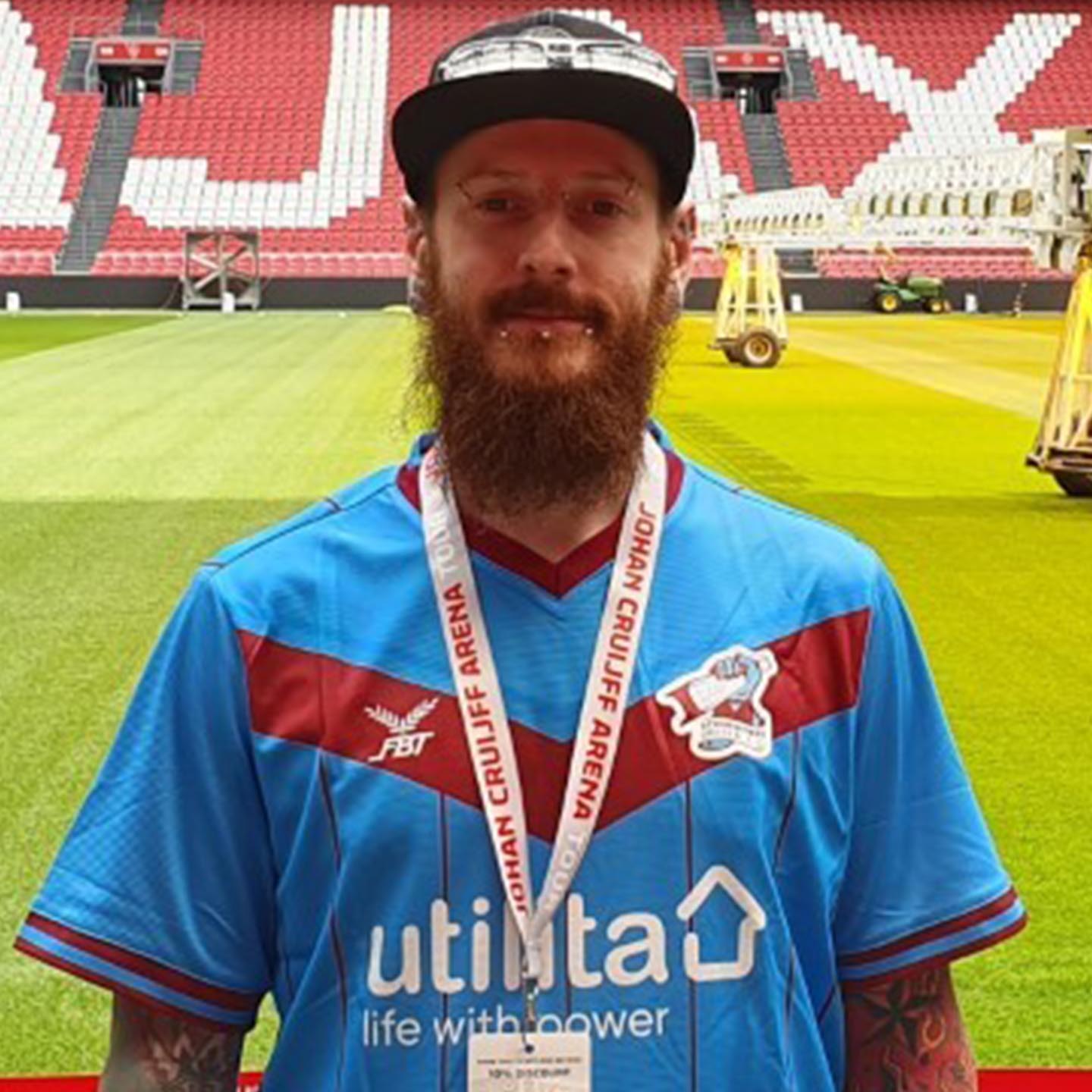 From travelling to Ibiza to watch the Iron, to last minute jubilation against Tranmere in 2009, the United die-hard has just about seen it all, and speaking to our matchday programme last season, he told us everything.

What was your first Iron game?
CA: I was very young, so I can’t remember the team we played, but it was the 1987-88 season. After that, my dad started taking me to games at the new stadium.

What’s your favourite ever Iron game?
CA: That would have to be Wembley in 1999. We beat Leyton Orient in the Third Division play-off final, despite them battering us all game! We were the underdogs that day, and winning meant I got to see new teams, it was the highest I’d seen Scunthorpe progress since I started supporting.

What’s your matchday routine before kick-off?
CA: We usually get to the Iron Bar for about 12:30pm to meet all the lads and have a few beers, then head onto the terrace for about 2:40pm with a pie or a burger, in our usual spot.

Which stand do you sit in?
CA: We’re in the Donny Road end (Britcon Stand).

Where's the furthest you've travelled to watch the Iron play?
CA: League games would be Plymouth Argyle, but I went to Ibiza to watch Scunny in the San-An Cup a few years back. We waited for the dates to be announced and made it into a holiday, but we got to watch the Iron too.

What’s your favourite away ground and why?
CA: I used to love going to Saltergate (Chesterfield’s old stadium before relocation). I know it was old, but it was a popular ground with a lot of character compared to some of these new ones. We also seemed to win there a lot, which probably contributes to it.

What’s your favourite piece of Iron memorabilia?
CA: I’ve got quite a lot of signed stuff. I’ve sponsored quite a few players over the years so I’ve always chatted with them and they’ve given me a signed shirt or something similar. Back when there were no names on the back of shirts, Mark Samways (below) signed his for me. 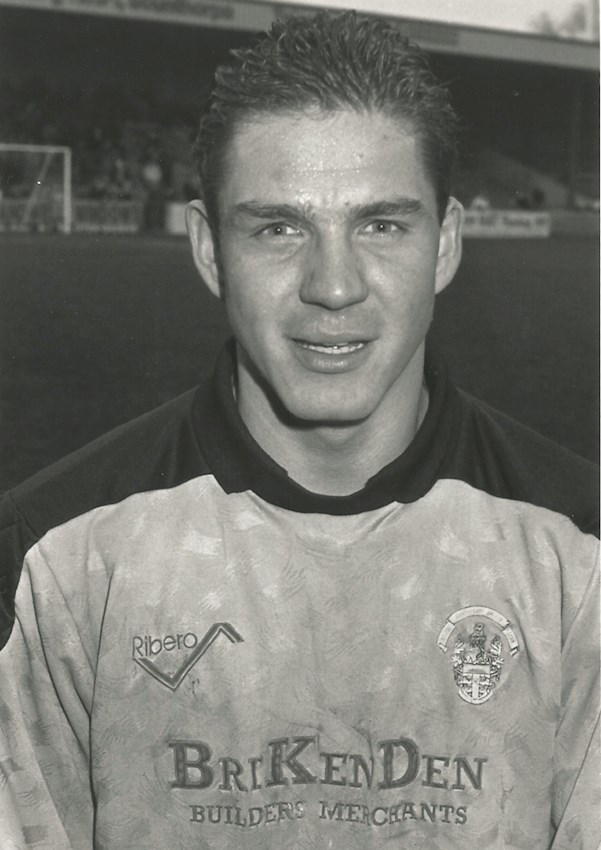 Do you collect Iron programmes?
CA: I wouldn’t say I collect them, but I instinctively pick one up on matchdays, which probably dates back 30 years. Getting one with your season ticket is good, which I’ve taken advantage in the last few years.

What's been your favourite ever Iron kit?
CA: Most people hated it, but I liked the 1994 away kit. It was red and looked like it had paint chucked over it! It’s labelled as one of our worst but I’ve still got mine today. I had it in kid’s size but recently I’ve bought an adult one from eBay so I can wear it.

Whose name and numbers have you had on the back of your shirt?
CA: With the home shirts, I tend to get my name on the back, and away shirts it depends on which player I like that season. I think the one I had on the back the most was probably Alex Calvo-Garcia (below). 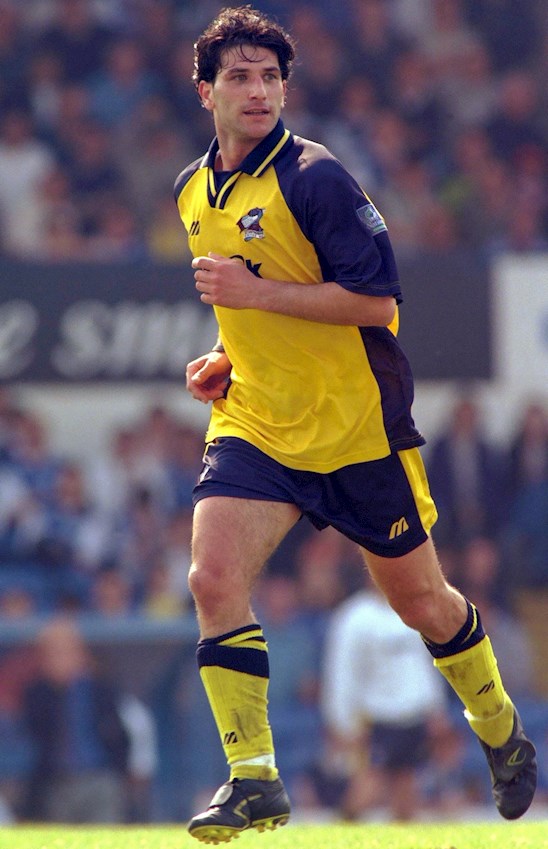 Do you have a favourite ever Iron player?
CA: It would have to be Alex Calvo-Garcia. Obviously, he scored the goal in 1999 to take us up, but there was something else. He kept his word, which very few players do. We were the only English team he played for, and he promised if he ever left, he wouldn’t play for another English team, despite the offers.

Have you ever met any Iron players?
CA: I’ve been to plenty of end of season awards evenings, so I’ve met a few there. I was also a mascot for a game against Scarborough in 1995-96, so I was around 11 or 12 at the time, and I remember having a picture with Mark Samways on the centre circle before the game, amongst other things.

If you could erase one Iron moment from Iron history, what would it be?
CA: I’d have to say losing on penalties in the 1992 play-off final against Blackpool. It was the first final I’d seen us play in, so it was heart-breaking. We battled for 90 minutes but the penalties were terrible.

If you could relive any Iron game in history, what would it be?
CA: When we drew 1-1 with Tranmere to secure the play-offs in 2009 (top photo). It was captain Cliff Byrne’s late equaliser and the Donny Road end went mental, I think I fell seven rows forward! It was significant as well because we went on to win the play-offs.

If you could watch the Iron play any club side in the world, who would it be and why?
CA: For me, I’d like to see us play West Ham United, purely because I don’t think we’ve ever actually played them.