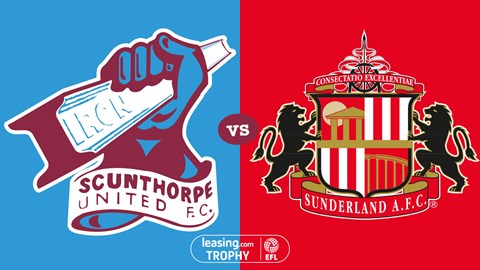 The boss expects a tough challenge against the Black Cats, with their squad looking to impress new manager Phil Parkinson.

Hurst said: “Sunderland are bringing a good number of fans and hopefully our supporters will come out and support the team. They’re a good side and also have decent players who aren’t in the first team at the moment if they do change things around.

“Either way, it’ll be a really tough challenge and one I’m hoping the players can respond to.

“They have a big squad and will put a team out that will pose a big test. Phil (Parkinson) and Steve (Parkin, assistant manager) have gone in there recently and are still relatively new, so you’d expect the players will be looking to impress them. That will be the challenge for us, as they’ve got to come and try to win the game to get through.

“We have our own problems injury-wise, but whoever gets to put on that shirt, it’s an opportunity to impress and give me a nudge in terms of wanting to be in the team at the weekend. There will be changes enforced, and every time you go out there it’s to try and win a game of football and that’s what we’ll be doing.”

Providing an update on illness and injuries, he added: “Harrison (McGahey) remains out through illness. Yann (Songo’o) is out injured, and has a dislocated big toe, which needs putting back in.

“A month out is the early prognosis there so we’ll lose him for a few weeks in an area where we’re already light, with Regan (Slater - foot) and Levi (Sutton - hand) out, so there will be an opportunity for someone there to come in.

“Jamie Proctor is unavailable for this competition, which we knew before, so there will definitely be changes to the squad.

“Kgosi Ntlhe (groin) had his first day back training properly on Monday but isn’t ready to be back involved in the matchday squad just yet.

“Some of the lads who have been back training after injury recently might be involved in the squad, but realistically we’ll have some younger players involved, though most of them will probably be on the bench rather than starting. It will be a strong team and one that could well take to the field on Saturday (at Leyton Orient).

“It’s an opportunity for one or two, and we’re on the back of a defeat so we want a response to that. The scoreline (at Crawley) wasn’t a fair reflection of the game but ultimately we still lost, so it’s a chance now to test ourselves against a very big League One club with good players.”