New addition Andy Dales is excited about his move to the Iron and expressed his determination to show everybody what he’s capable of. 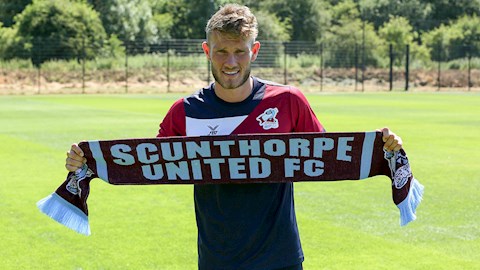 The attacker joined from Mickleover Sports for an undisclosed fee to become our second signing of the summer on Friday, and has been on United’s radar for a long time.

A former Derby trainee, the 23-year-old has impressed and a number of clubs higher up the football pyramid have been keeping tabs on his progress.

Dales scored over 20 goals for Mickleover Sports last season and was named in the Northern Premier League Premier Division team of the year as well as being called up to the England C squad as reward for his impressive performances.

“I think the club have been looking at me through the year. I got the phone call to come in and have a word, and it’s gone from there,” he told iFollow Iron. “I was at Mickleover last year and it’s a big step-up. I can’t wait to get started.”

Dales added: “I was at Derby County from the age of nine until 19. Then I went to Mickleover and had been there for four years up to now. It’s really good there and I enjoyed it. It’s a good set of lads there, but this is where I want to be.”

He continued: “Not everyone can go through the same route. Not everybody can go from being in an academy and play for the first team straight away. Some people drop out of it and into non-league, working their way back up. I’ve done that and can’t wait to get started in the EFL now. Last season was one of my better ones. I scored 23 goals in the end and it was a really good year for me.”

Dales met his new Scunthorpe team-mates for the first time as they returned to Glanford Park for the start of pre-season training on Wednesday, and he is looking forward to undergoing some hard but rewarding preparation.

“It’s been four years since I’ve had a proper one. It won’t be easy but I can’t wait for it,” he said. “I’ve done everything I can do this summer in terms of preparation. Firstly, doing my Mickleover training, and then using the schedule sent to me a week ago by Adam Kerr (Head of Physical Performance). When I came here initially I felt really welcomed by the manager and all the staff, and I have a really good feeling about it.”

Dales concluded: “I want to be at a team who are up there and hopefully I can show the manager what I’ve been doing in the past few seasons in non-league. I just want to get into the squad to start with and it goes from there. I want to impress the manager, impress the crowd and play football.”

See much more from Andy Dales on iFollow Iron. Click here for details of how you can sign up for the season.