Originally published in the Iron's programme vs Southend United on December 23rd, 2017

ON LOOKING BACK IN CLARET AND BLUE, AS A PLAYER…
When you talk to any Scunthorpe United fan of the era – particularly those who remember the 2003-04 campaign when the Iron almost lost their EFL status – and ask them what changed in 2004-05, many will say the spine of the team.

Ian Baraclough was one of three summer signings made by then-manager Brian Laws, with Paul Musselwhite returning between the sticks after originally playing for the side in 1988 and the arrival of new club captain Andy Crosby completing the wealth of experience in additions.

It would be the start of a whirlwind period for United, which saw them surge all the way to the Championship, with the former Notts County man admitting not only that he thought it’d be his final season as a professional, but never imagining he would again be plying his trade in the second tier of English football. 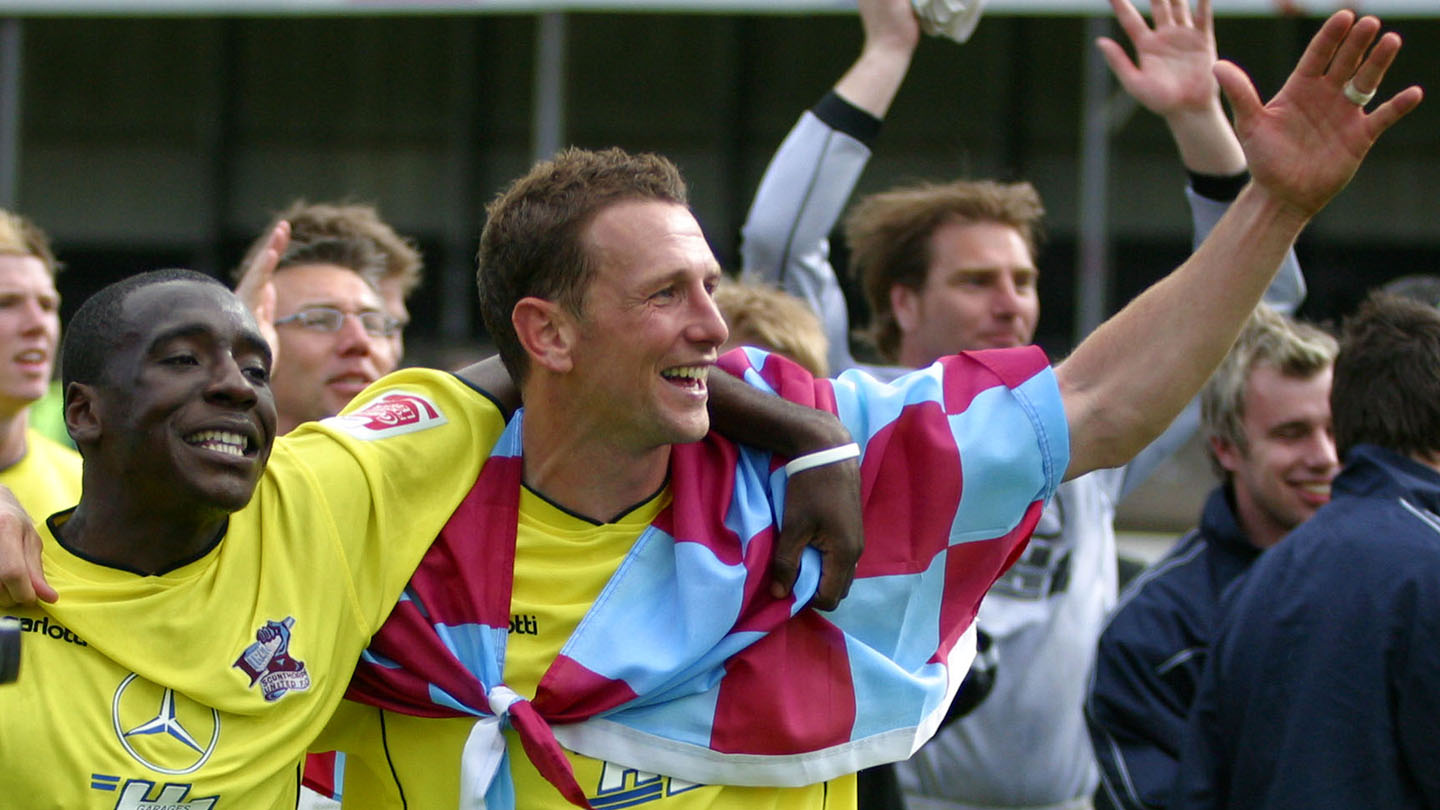 PHOTO: Ian Baraclough celebrates promotion from League Two with the Iron during May 2005.

“I wasn’t there the season before, but I know it was close to possible relegation,” Baraclough said.

“Having spoken to Brian Laws in the summer, he wanted to bring in some players with experience and he said about the spine of the team - Mussy as ‘keeper, Crozzer in defence and myself in the centre of midfield - I think that was exactly what he was looking for. It obviously had the desired effect, we obviously wanted to improve on the season before, but for me I was 33 and thinking I was signing my last one-year deal. I didn’t imagine I’d be at the club for what would be five years, going into the coaching side and then managing the club.

“It was probably my most successful spell as a player in terms of trophies and winning things. To go back and be a Championship player again was something I never envisaged, but then to get relegated and do it again shows what a successful period for the club it was. The club was punching well above their weight and certainly didn’t have the financial resources at that time. It was a typical David v Goliath situation. There was a sense of togetherness. It was a great ending to my playing career and it gave me a lot of joy and a lot of satisfaction.”

ON THAT GOAL V SOUTHEND… 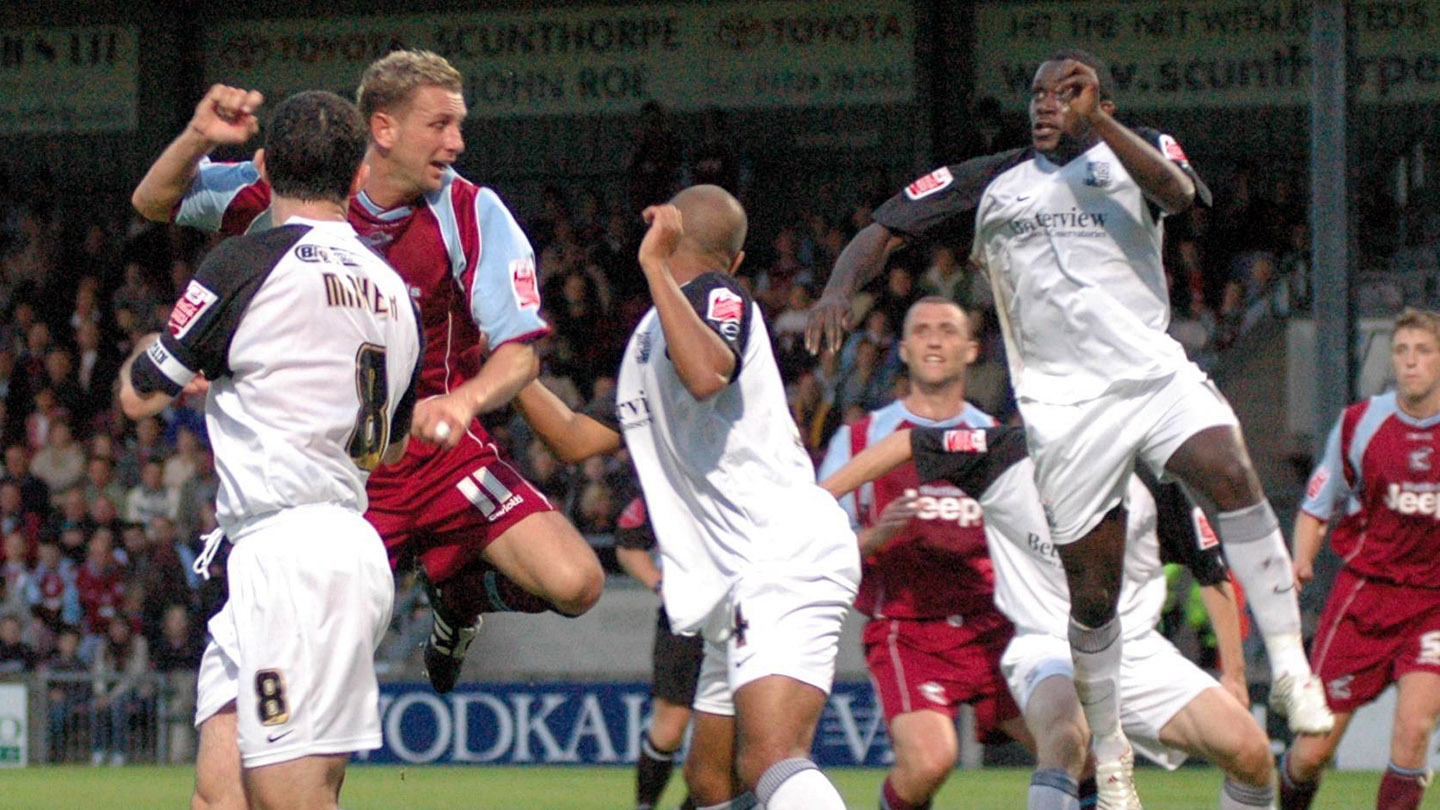 While in past issues, we’ve had a clear connection to a familiar face with the weekend's opposition, this connection might not be an obvious one.

In fact, it is quite a loose one, but back in 2005-06 following our promotion to League One the Iron faced the Shrimpers at Glanford Park with a 1-0 victory putting Scunthorpe at the summit of the division – overnight at least. Who netted that goal; one Ian Baraclough.

“I didn’t score that many goals, perhaps four or five a season,” he continued.

“I think I scored a similar one against Swansea as well, but Billy Sharp was involved in the goal and it was fantastic to play with players like him, who was a young player coming through at the time. Spadge (Matt Sparrow) had been there for a few years, but was on top of his game and the players there were willing to work hard and there was a really good blend.”

ON EMERGING ON THE COACHING SIDE AND BEING MANAGER… 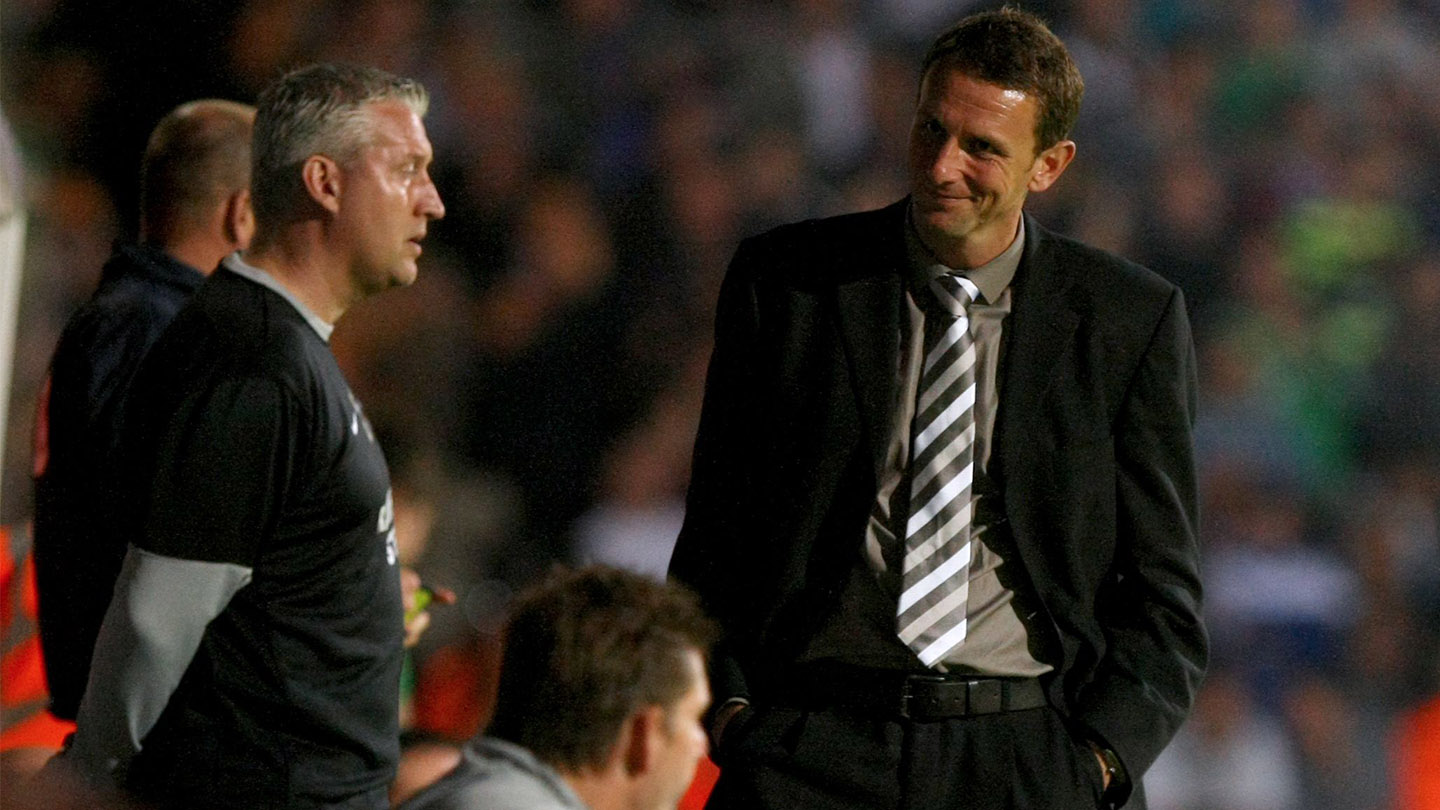 While his playing career had been extended beyond that initial year he expected, the end was looming. Baraclough had already looked towards his boots being hung up and admitted the success of the Iron aided his progression, even though him taking the reigns at Scunthorpe may have been a move that he wasn’t quite ready for.

“I’d been interested in coaching, but very few players jump through from being a player to coaching in a first team environment,” he said.

“I guess it was a bit of luck that Brian Laws and Russ Wilcox moved onto Sheffield Wednesday on the back of doing well. Nigel Adkins was obviously given the job temporarily at the time and he looked at myself and Andy Crosby as two allies in the role. There were no thoughts of doing it full-time or being as successful as we were but we wanted to do the best job we could.

“I don’t know whether it is widely known, but Nigel did want to take people with him, but there were obstructions at both ends. Southampton’s chairman at the time, Nicola Cortese, didn’t want Nigel taking his full staff on mass and Mr Wharton also indicated he didn’t want the entirety of our staff decimating. Yes, I would have liked to have gone, I don’t mind coming out with that fact. The decision was to either come under a new manager and see if he likes you, as there are no guarantees, or taking the job. I knew it was a tough ask in a relegation battle. We’d sold players, we’d lost our strikers and hadn’t replaced them really. You can only do that for so long. Nigel got the call from Southampton and quite rightly took the job. It was a ‘Catch 22’ situation for me.”

In reality, it was the second of those two options that was thrust upon the pending permanent United boss – especially after the dream start in the caretaker role of a thumping 4-0 victory over Sheffield United at Bramall Lane.

He spoke of the massive learning curve he would then embark on and his disappointment that the tenure would come to a premature end after dropping into the relegation zone for the first time in the season.

“To be offered the manager’s job was something, in the end, I couldn’t really turn down even though I probably wasn’t ready for it and the situation wasn’t great,” he stated.

“Those six or seven months were my biggest learning curve and I still felt we had a chance of getting out of it. The only time we dropped into the bottom three was the night we were beaten 3-0 by Preston and I ended up getting the sack. I still felt we could make a good fist of it, but it wasn’t to be. No one will know what would have happened.

“I learnt how to deal with chairmen, board members and players. One minute I was in the dressing room and part of it and the next I was managing and that was tough as a rookie manager. Hopefully I’ve taken that forward to every job I’ve had since.

“Yes, I don’t mind saying that (on his dismissal being premature). But I understand. There are no hard feelings. Would I have done things differently? Yes, I probably would. I was always going to make mistakes, but I was given assurances that those mistakes would be looked at and not held against me in the position I was in and that even if we were relegated, I would have the chance to bring the club back up again. When things like that are said and then cut short, it is hard to take, but you have to have character and show resolve, and it was always something I was going to bounce back.”

AND BOUNCE BACK HE DID…

Moving abroad to reignite his managerial career, he would turn out to be somewhat of a legend at Sligo Rovers as he steered them to their first title success in over 35 years at the first time of asking.

He would then overcome Scottish giants Rangers over two legs in his next appointment with Motherwell, maintaining their SPL status. Added to that, his current international managerial appointment with Northern Ireland Under-21s. The 47-year-old now holds a wealth of experience.

“I’m really proud. There was a statistic going around at the time from the LMA (League Managers Association) that 50% of first time managers that get the sack don’t get another chance,” he said.

“It was 11 months before I got that chance, but I had to move abroad. I won the League of Ireland with Sligo Rovers at the first time of asking. It was the first time in over 35 years that the club won the league, while winning two cup trophies in two-and-a-half years there.

“At Motherwell, it was a similar story to Scunthorpe. My remit was to stay in the league and we managed to do that with a play-off win over Rangers over two legs, including a win at Ibrox. We needed to change things around for the following season, but I was only given seven or eight games. You get your ups and downs and it’s how you respond to that.

“I went in as Steve Robinson’s assistant at Oldham, who I had taken in as my assistant at Motherwell and on the back of that I’ve taken over the Northern Ireland Under-21s. I’m really enjoying the international management side of things. It’s very different. You don’t work with a group of players day-in, day-out and you don’t have long to prepare for one or two games. Apart from that, you’re a full-time scout really, watching your players and helping Michael O’Neill as well to watch his players.

“I’ve taken on clubs that have been the underdogs really and managed to do something with them and try and achieve something. With the Under-21s, we’re the bottom seed in the group and currently sit second having won three out of the five games. It’s as good a record as they’ve ever had. There’s a certain satisfaction when you do achieve something as an underdog. It takes a certain character, certainly as a player, to go into games where you’re not expected to win but as a group you believe you can. Winning is a habit difficult to break.” 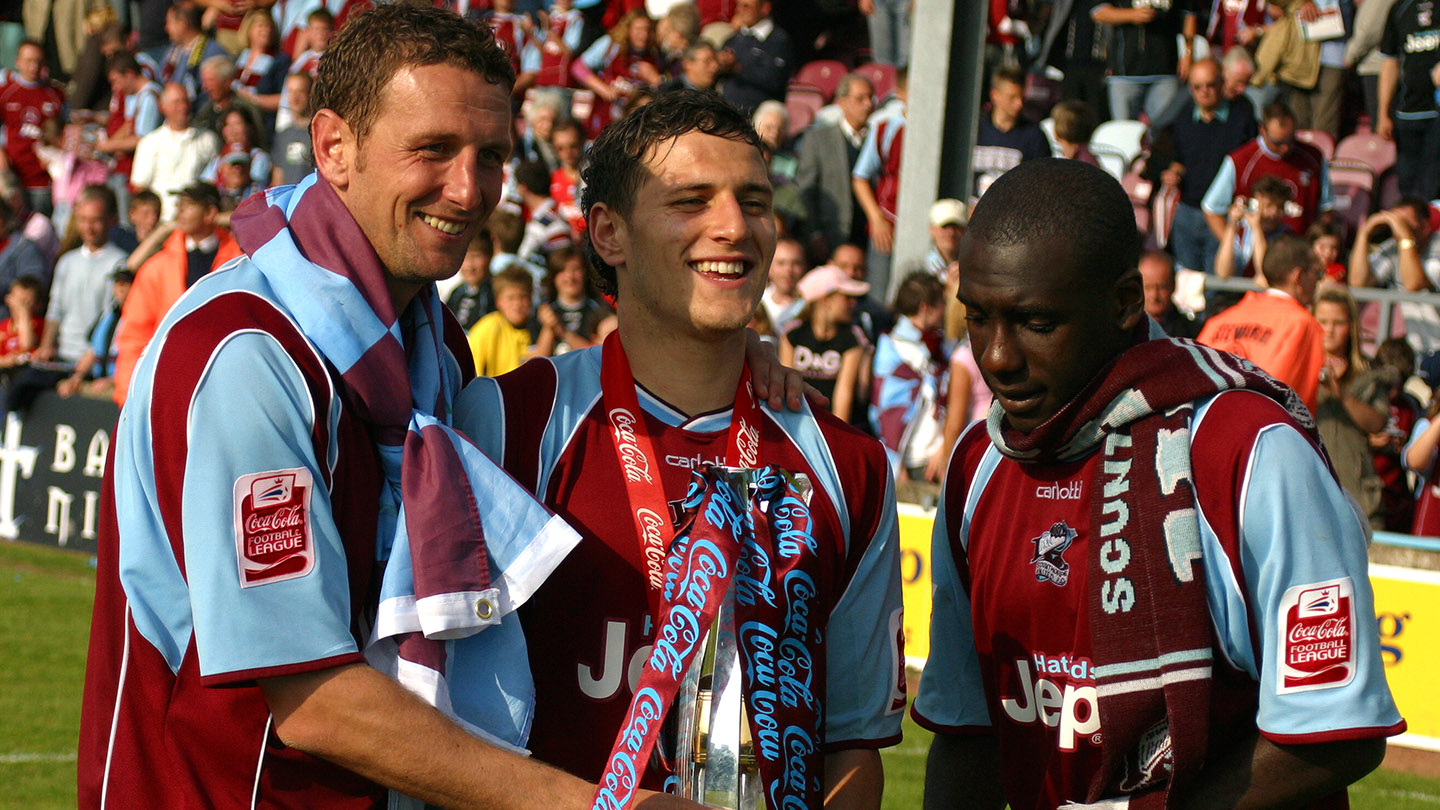 PHOTO: Ian Baraclough celebrates winning the League One title in May 2007.