The Iron will kick-off their 2017/18 Emirates FA Cup campaign when they make the visit to Northampton Town on Saturday afternoon (3.00pm kick-off). 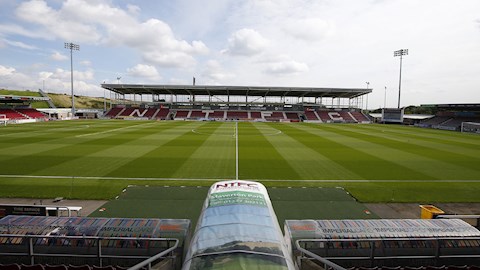 Fans can pay on the day at Northampton

Graham Alexander’s men have won their last two league matches and drew 1-1 at Doncaster Rovers in the Checkatrade Trophy during the week, but lost 3-2 on penalties.

Debutant Clayton Lewis found the back of the net in that game with a neat finish to cancel out Liam Mandeville’s earlier striker.

The Cobblers have also won their last couple of league games, with the most recent coming at home to Blackpool. Will Hoskins netted in the first-half to give them a 1-0 victory.

TEAM NEWS…
Alexander confirmed Neal Bishop is back in training and the midfielder will be further assessed ahead of kick-off to see if he will be available.

Additionally, Levi Sutton has also returned to training after a thigh strain, but this weekend’s match will come too soon for the 21-year-old.

It remains the same for Conor Townsend (hamstring) and Sam Mantom (groin), while Jonathon Margetts (knee) has had an operation. Luke Williams (hamstring) continues to miss out.

PAST MEETINGS…
The two sides last met in January with the Iron coming out as 2-1 winners. Kevin van Veen put Scunthorpe ahead before Alex Revell equalised just before halt-time. However, Josh Morris scored a late winner for his side to take all three points back to Glanford Park.