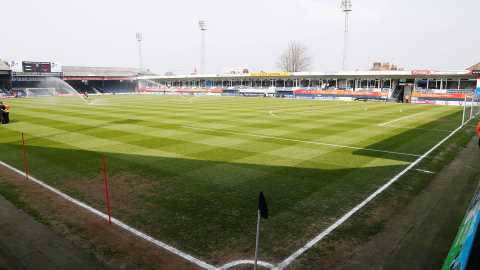 Manager Graham Alexander is looking forward to the test the League Two side will pose after just missing out on promotion to League One via the play-offs last season.

With just one week to go until our League One season opener against AFC Wimbledon at Glanford Park, the game against the Hatters represents one of the final key parts of the season warm-up schedule.

Alexander confirmed in a pre-match interview that he'll be looking for his players to complete 90 minutes where possible, while looking for another step-up in the performance following a goalless draw against Sunderland in midweek.

The United manager enters the game with the same squad that was available to him on Wednesday.

Missing out will be Luke Williams, who is still recovering from the hamstring injury picked up while on loan with Northampton last year. Meanwhile, Lewis Butroid looks set to miss out after picking up a knock. Despite these injuries, Alexander hopes that both will be able to train on Monday.

Elsewhere, Sam Mantom will be absent after suffering a swollen foot, although the Iron boss remains hopeful that he will be able to train and be ready ahead of the new campaign.