The Iron were beaten 3-0 by Championship side Middlesbrough in the Carabao Cup second round on Tuesday evening. 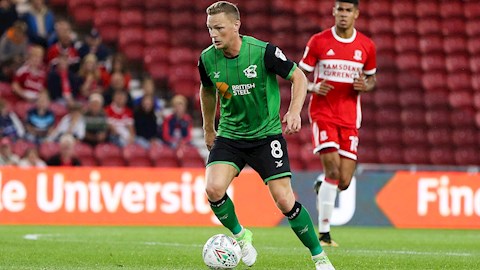 It was Fabio who netted first. The full-back made a run to the back post and anticipated the ball getting through to him. After being missed by the Boro’ players in front, the Brazilian was there to nod it home.

Lewis Baker was next to get on the scoresheet. He was found on the edge of the box right in the centre. The midfielder turned with the ball to get an eye on goal and slotted it into the left of the net.

Finally, Marcus Tavernier followed a one-two with Ashley Fletcher with a driven ball into the centre of the box which the latter tapped into the back of the net.

The Iron made two changes to the team that beat Oxford United on Saturday. Sam Mantom and Duane Holmes came into the side for Funso Ojo and Kevin van Veen.

Early on, the two teams were feeling each other out. The Iron were unlucky not to convert a few chances. In the seventh minute, Conor Townsend was found open on the wing by Hakeeb Adelukan. The full-back whipped a cross into Josh Morris and he was unlucky not to get his head to the ball.

Adama Traore’s blistering pace became an apparent threat early in the game. He let the Iron defence know that he was there as he managed to sprint up the right-wing and put a ball across the face of the goal. However, no-one was there to finish it.

Levi Sutton produced the first chance of the game as he crossed the ball into the box. Paddy Madden couldn’t get his head to it but it fell to Josh Morris just inside the box. Saturday’s goalscorer shot but sent it over the crossbar.

Only a couple of minutes later, Fabio fired home the first goal of the match.

Middlesbrough continued to attack and it paid off for the home side as Baker curled in his effort from just outside the centre of the box.

The Iron responded though as Conor Townsend chipped a ball into the box and almost found Morris on the back post. If it wasn’t for Konstantopoulos’ quick reaction then it would’ve been two goals in two games for the winger.

Adelakun followed shortly with a shot of his own. The 21-year-old fired from around 25-yards out and it was only just over the crossbar.

Shortly after, Leadbitter spearheaded a Middlesbrough attack but rather than passing to his open winger the captain tried to chip Iron ‘keeper Matt Gilks. However, the experienced signing always had it covered.

With only three minutes of the opening half left, Marcus Tavernier found himself one-on-one with Gilks but out of nowhere Iron skipper Rory McArdle slid in and pulled off a heroic block.

Baker was relentless and didn’t give the Iron defence a minute’s rest. It almost paid off for him when he drove into the box and got a shot away with half a minute left. However, both that and the following shot from the rebound were dealt with efficiently by the Iron defence.

The Iron came out hot in the second-half and almost converted a set-piece. Morris curled the ball into Neal Bishop. Unfortunately though, despite getting it on target, the goalkeeper kept the midfielder’s effort out.

Ashley Fletcher capitalised on a loose ball in midfield and ran through on goal. He got a shot away with plenty of time to spare but Gilks stopped it dead in its tracks.

Despite Scunthorpe looking the more likely to score since coming out for the second-half, an exchange of passes between Fletcher and Tavernier led to the third goal of the match.

McArdle was unlucky not to net in the 62nd minute. Adelakun’s corner fell to him at the back post and the ‘keeper couldn’t hold onto it. The defender turned to the ball and hit it but it went just wide.

Gilks pulled off some heroics to prevent the score from becoming 4-0 to the home side. Lewis Baker was found inside the box on his own. The midfielder shot from the right-hand side but the Iron’s ‘keeper got down and blocked it with his foot.

There were no major attempts on goal in the last ten minutes and the game ended 3-0.