The Iron return to league action on Saturday as they host Morecambe at the Sands Venue Stadium in Sky Bet League Two (kick-off 3pm).

United will be looking to bounce back from last week's 2-0 away defeat at Mansfield, which came following the first victory of the campaign against Grimsby Town in the Leasing.com Trophy four days prior.

Morecambe, however, come into the game after battling for a point against Salford City last week although they might count theirselves fortunate that they emerged with a sharing of the spoils after the Ammies missed two penalties in the 2-2 draw at the Globe Arena.

Iron manager Paul Hurst confirmed in his pre-match press conference he will be without captain Andy Butler and midfielder Ryan Colclough for the weekend's game.

Butler injured his ankle a week ago against Mansfield Town, despite completing the full game, while Colclough felt a slight reoccurence of his recent groin problem which resulted in him missing training on Thursday.

Jamie Proctor is eligible to make his home debut for the club after making his first start last weekend at the One Call Stadium, while James Perch is back in contention for the match, after serving a three-match suspension incurred for a red card against Cambridge United in the league last month.

Both Jacob Bedeau (knee) and Lewis Butroid (ankle) returned from their respective injuries in midweek to face Southend United Under-23s in the Premier League Cup second qualifying round, while Levi Sutton (medial ligaments) and Andy Dales (hamstring) are back in full training. Hurst expects the latter two to be available for the next Under-23s encounter as they build their way back up to full fitness.

Meanwhile, Kgosi Ntlhe (back) and Jordan Hallam (ankle) have recently been added to the injury list which also comprises of Lee Novak (ankle) - although the Geordie is recovering well and could be back running on grass in due course. Ntlhe's back injury is not as bad as first feared though, as he edges closer to a return.

The Iron sealed their first win of the season in Sky Bet League Two, with an emphatic 3-0 victory over Morecambe at the Sands Venue Stadium.

Goals from Jamie Proctor, Kevin van Veen and Matthew Lund secured three points as the Iron struck in the first half.

Inside four minutes, Junior Brown crossed for van Veen but the striker sliced the ball over the bar.

The left-back was involved in another move, five minutes later. Brown and Abo Eisa combined down the right and Eisa’s cross found Jamie Proctor inside the area but he couldn’t direct his header towards goal.

With 20 minutes on the clock, Andrew Tutte drew a good save from Watson. The visitors won a free-kick out on the left which was taken short to the Shrimps’ midfielder who let fly from the edge of the area but the Iron ‘keeper was equal to it.

The Iron were awarded a penalty, with 24 minutes gone. Referee Nicholas Kinseley pointed to the spot for an infringement on van Veen.

Home debutant Proctor’s initial spot-kick was saved by Barry Roche but the striker made no mistake from at the second time of asking to make it 1-0.

On the half hour mark, Lund saw his shot blocked, after van Veen squared it to the number four.

Van Veen doubled the Iron’s advantage with 32 minutes played. Proctor laid the ball off to Alex Gilliead who drove forward and unleashed an effort from 25 yards which ricocheted off the post.

However, the Dutchman was on hand to follow up, blasting home the rebound.

Shortly after, Proctor glanced narrowly wide from a Brown cross, looking for his second and the Iron’s third.

United added a third before the break, as Lund netted with four minutes left of the first half. Eisa found Gilliead who drove forward, only for Roche to parry into the path of Lund.

Seven minutes into the second half, Proctor picked out Yann Songo’o in the box but the latter couldn’t get on the end of it. It landed at the feet of James Perch arriving at the back post and the right-back toe-poked wide.

Proctor’s acrobatics almost made it 4-0 from the resulting corner. Gilliead’s delivery fell for the striker whose bicycle kick was just over the bar.

At the other end of the pitch, Watson made a double save. O’Sullivan crossed for substitute Cole Stockton and the Iron shot-stopper was forced to make the save. The Shrimps came knocking again and Watson tipped Lewis Alessandra’s powerful effort over the bar.

With an hour played, van Veen and Songo’o linked up but the latter’s effort took a deflection and was cleared to safety.

Iron players were queuing up to test Roche between the sticks. Van Veen latched onto strike partner Proctor’s flick-on but fired over.

The Iron had the ball in the back of the net with 65 minutes gone. Rory McArdle rose highest to meet Gilliead’s set piece but the skipper’s looping header was ruled offside.

Minutes later, Gilliead rolled an effort of his own just wide of the upright after Songo’o won the aerial duel and van Veen fed the ball to the winger out on the right flank.

Brown cut inside and took aim from distance, with 20 minutes left on the watch, after Proctor held the ball up well for the defender, but it flashed just over the bar.

Late in the day, the Shrimps had a penalty for a foul on O’Sullivan. Watson made a superb save in added time, getting down to his right to deny Adam Buxton from 12 yards for his second penalty stop of the season and preserve a clean sheet at 3-0.

Save money by purchasing your Iron v Morecambe tickets in advance! Tickets are on sale now for the home clash.

Our Early Bird Price Rates have been frozen for the sixth season in succession, and supporters can buy at these prices until the ticket office closes at 5pm on Friday, September 13th, and also until three hours before kick-off online via our ticketing website (www.sufctickets.com). Matchday prices then apply.

PAY ON THE GATE: Iron fans can pay cash on the gate for Turnstiles 2A and 2B of the Britcon Stand, and Turnstile 4A of the East Stand. Please note, full matchday prices apply.

United's encounter against Morecambe is a Category B fixture.

Saturday, September 14th - 9am-3pm (also open for a short period of time after the Morecambe game) 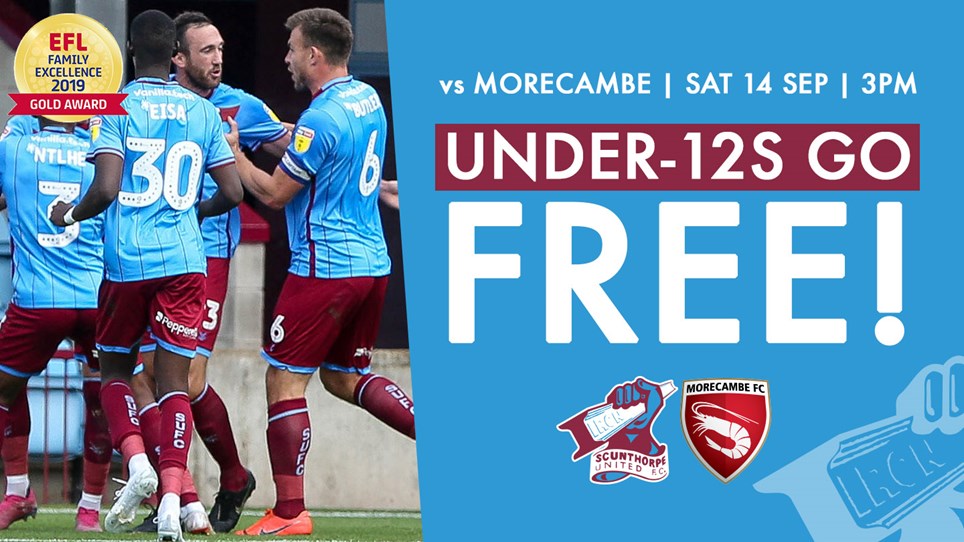