The Iron will be looking to get back to winning ways in Sky Bet League One when they make the long trip to face Southend United at Roots Hall on Tuesday (7.45pm kick-off).

Watch the Iron at Southend LIVE on iFollow Iron

Scunthorpe were edged out by the league leaders Portsmouth at Glanford Park at the weekend and, despite Lee Novak's eighth goal of the season and second half pressure on the visitors, Pompey held out for a slender 2-1 victory.

The Shrimpers also come into the fixture on the back of a 2-1 defeat as they let a 1-0 lead slip to lose at AFC Wimbledon.

United manager Stuart McCall is set to be without Cameron Borthwick-Jackson and Funso Ojo, with both withdrawn against Portsmouth on Saturday. The Manchester United loanee came off at half time with an ankle injury, while the Belgian was withdrawn early in the game following a recurrance of his hamstring injury.

Josh Morris made the bench at the weekend as he edges back from a fractured jaw sustained against Peterborough United six weeks ago, while McCall also confirmed that two further players would miss out on the trip after sustaining injuries in the build-up to the game.

Elsewhere, Matt Gilks (knee), Rory Watson (arm), Levi Sutton (thigh) and Jordan Clarke (shoulder) continue to miss out, while Ryan Colclough (knee) is out for the remainder of the season.

Last season, the Iron lost 3-2 against Southend United at Roots Hall, despite leading 1-0 early in the game through now-Shrimper Tom Hopper. Scunthorpe went 2-1 down, with Kevin van Veen scoring the equaliser before a last-gasp winner from the hosts.

Meanwhile in the reverse fixture at Glanford Park, it was the Iron who won 3-1 with goals from van Veen, Conor Townsend and an own goal from Michael Turner, who would incidentally score the last minute winner at Roots Hall just over a month later.

Forward Simon Cox has eight goals to his name in all competitions this season. After beginning his career with Reading, he's been at a further eight clubs before arriving at Roots Hall in July 2016.

Sam Mantom is also in line to make his first appearance against the Iron since being released in the summer. The midfielder has been a near ever present in the side, making 21 appearances in all competitions this season. He's recently scored his first goal for the club in a 6-2 FA Cup win over Crawley Town.

The Iron, down to ten men for more than half the game, lost 2-0 away at Southend United on Tuesday evening.

Timothee Dieng put the hosts in front with an early headed goal at Roots Hall, before James Perch was sent off for receiving two yellow cards.

The victory was sealed with ten minutes left on the clock when ex-Iron Sam Mantom smashed home a volley.

Manager Stuart McCall made three changes to the starting line-up that lost to Portsmouth on Saturday. Josh Morris made a return from a jaw injury, whilst there were also starts for Perch and Ike Ugbo. They replaced Matthew Lund, Funso Ojo and Cameron Borthwick-Jackson.

Southend had the first sighting of the goal inside the opening five minutes. Jason Demetriou’s right-wing cross was flicked on by Dieng to Simon Cox, but the striker’s sliding toe-poke caused Jak Alnwick no trouble.

Just moments later, the hosts took a 1-0 lead through Dieng attacking the box from midfield again. Harry Bunn’s cross picked out the Frenchman, who was charging forward, and his header was pushed to onto the bar by Alnwick, but the ball bounced over the line.

It could have been 2-0 in the 11th minute when Stephen McLaughlin received a pass from Cox and raced down the right. He checked back onto his left foot and aimed for the far corner, but Alnwick made a superb diving save to push it behind for a corner.

Perch then received a yellow card in the 28th minute for a challenge on McLaughlin to the right of the Iron’s box. However, the winger’s set-piece was cleared away.

Similar to his earlier effort, McLaughlin had another try to score. The hosts broke down the right with substitute Elvis Bwomono, who passed back to McLaughlin. From a longer distance, the winger attempted another curling effort that was heading into the left corner of the net, but the Iron goalkeeper made a fine stop to parry it away.

Scunthorpe came looking for an equaliser when captain Rory McArdle switched the ball to Charlie Goode, who sent an inviting cross into the area. However, Cameron Burgess’ header went straight at Mark Oxley.

In the 38th minute, the Iron were reduced to ten men. Perch was shown his second yellow card of the match and subsequently sent off, following a foul on McLaughlin.

From the free-kick, McArdle cleared a lobbed effort from Cox off the line, before striker Lee Novak also performed defensive duties when he blocked a rebounding shot.

The Shrimpers came looking for a second just before half-time. Full-back Stephen Hendrie advanced down the left-wing and drilled a shot straight at Alnwick.

After the interval, the Iron saw a deflected header bounce off the top of the crossbar. Morris delivered an in-swinging corner towards Burgess, and his looping header took a slight touch on its way to striking the bar.

Andy Dales then swung a free-kick onto the box from the left-wing, but Novak’s header flew wide of the goal.

The Iron continued to look a threat from set-pieces when Morris stood over a free-kick 30-yards from goal. On his return to the team, Morris bent his strike around the wall, but goalkeeper Oxley pushed it away from danger with a diving stop.

However, Mantom, who had a chance beforehand, scored to increase Southend’s lead with ten minutes left. A deflected cross from McLaughlin fell to the former Iron player, who smashed a volley into the back of the net.

The Iron were unlucky not to get an immediate goal back. Novak latched onto a loose ball, but his chipped strike cannoned off the crossbar, before Oxley pounced on the ball.

A solid block late on from McArdle denied Michael Kightly a goal, keeping the scoreline at 2-0.

United next travel to Shrewsbury on Sunday for the second round of the Emirates FA Cup.

Iron fans can pay CASH-ONLY on the turnstile at Southend United on Tuesday night, with matchday prices applying.

Click here for coach travel details, with seats still on sale until Tuesday lunchtime from the Iron. 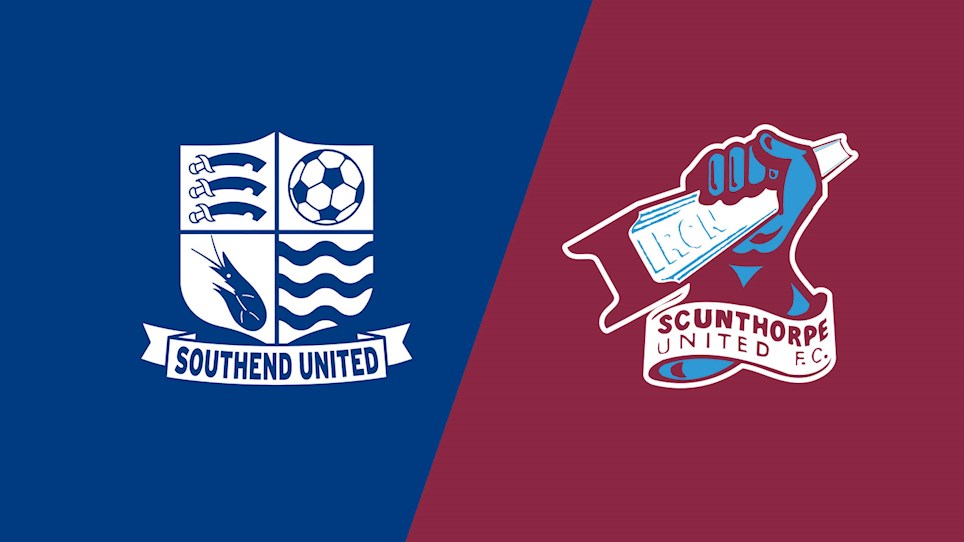 
Tickets have gone on sale for the Iron’s away trip to Southend United on Tuesday, November 27th (7.45pm kick-off).