The Iron take on Mansfield Town away in their final Checkatrade Trophy group game (7.45pm kick-off).

Should United avoid defeat, they will qualify for the second round of the competition ahead of Lincoln and Wolves U21s. Victory by a certain margin would also see them top the group, with current leaders Mansfield’s goal difference better by two goals at present. The Stags have already qualified for the next round.

Manager Stuart McCall has said changes will be made from the team that defeated Burton Albion 2-1 in the Emirates FA Cup first round on Saturday, while the hosts are also likely to make changes having only played Charlton Athletic, who they drew with, on Sunday.

Definitely missing for United are Ike Ugbo (cup tied) and George Thomas (international duty with Wales), though the latter came off with an ankle injury on Saturday. Also absent are Josh Morris, who is still recovering from a jaw injury, Matt Gilks (knee) and Rory Watson (arm).

Matthew Lund was also set to be assessed after the game at the weekend after taking a knock, while Jordan Clarke came off with a shoulder injury and McCall said could be out for around six weeks, although he would go for a scan to determine the extent.

Cameron Borthwick-Jackson missed Saturday’s match with a hip injury, while Charlie Goode (calf) also sat out at the weekend.

Funso Ojo is set for a return to the team after coming back to full training following a hamstring injury.

ELSEWHERE IN THE CHECKATRADE TROPHY…

United were beaten 3-2 by Mansfield Town at the One Call Stadium, in a defeat which means they exit the Checkatrade Trophy at the group stage.

Yasin Ben El-Mhanni and Andy Dales were on target as Scunthorpe fought back from 2-0 down, but the hosts got a late winner and we consequently exit the competition.

The Iron entered the game making eight changes from the side that defeated Burton Albion 2-1 in the FA Cup first round at the weekend, with just Cameron Burgess, Rory McArdle and Lewis Butroid retaining their places in the team.

The first chance of the game came the Stags’ way in the opening minute, but Danny Rose’s long-range strike left goalkeeper Jonathan Flatt untroubled in the Scunthorpe goal.

Three minutes later, Butroid won a tackle on the edge of the Mansfield box and sent a cross in for Kyle Wootton, who stretched but couldn’t get on the end of the cross from his fellow academy product.

With 13 minutes on the clock, Dales made a good run through the middle and was picked out with a brilliant forward pass. The winger closed in on goal, but the outstretched boot of Stags goalkeeper Conrad Logan denied him, before the follow-up by Wootton was deflected wide.

On 16 minutes, Dales did well again, this time down the right flank. He cut inside and played the ball to Ben El-Mhanni, who linked up with Funso Ojo and Clayton Lewis in midfield to present Humphrys with a chance to shoot. However, the striker fired just over the crossbar.

Four minutes later, Scunthorpe came close again as Lewis tried his luck with a free-kick from the right wing. He almost caught Logan out but the shotstopper got back to claw away the New Zealander’s effort.

Just moments later, the home side took the lead when Nyle Blake received the ball on the left side of the 18-yard box and he cut inside before seeing his strike deflected beyond the grasp of Flatt and into the net.

In the 24th minute, United attacked through Ojo who advanced forward and drilled a shot forward which was parried away by Logan. Wootton latched onto the rebound but his header looped onto the top of the crossbar and went over, although the referee did blow for offside too.

United continued to press, bringing routine saves from Logan from range on occasions and, on 38 minutes, Stephen Humphrys showed neat feet down the left-hand side to go past his man and sent a cross to the back post. Wootton rose highest to win the ball and headed back across goal, but nobody could get a touch to divert it goalwards. The crosses continued to be sent into the box but the hosts stood firm.

With 45 minutes on the clock, Lewis played a nice ball inside to Ojo, who then spread it out wide to Butroid. The full-back delivered a low cross into the area, but it was steered away at the back post.

United kicked off the second-half with a bang as Dales received the ball on the edge of the area and fizzed an effort against the crossbar. Shortly afterwards, McArdle’s header was gathered by Logan as United stepped up the pressure.

Then Ben El-Mhanni found space just outside the 18-yard box and his strike was tipped over the crossbar by Logan.

However, the hosts extended their lead on 53 minutes as Calum Butcher got the ball just inside the Iron 18-yard box after a set-piece was only partly cleared and placed his effort beyond the reach of Flatt.

Soon after, the United shotstopper had to be quick to stop the threat of Danny Rose, who had been played in down the right.

With 59 minutes on the clock, Wootton closed down a Logan clearance and the ball hit the Scunthorpe striker but went wide of goal.

Dales probed forward four minutes later and moved from left to right of the 18-yard box before sending the ball across goal and beyond Logan, but just past the post too.

Next to come close for the Iron was Humphrys on 67 minutes, who took the ball, produced a couple of step-overs and ran forward with it before driving a low strike towards Logan’s bottom left-hand corner, but the goalkeeper tipped it wide.

Two minutes later, the hosts’ Jordan Graham cut inside from the left and fizzed his shot over the crossbar.

Scunthorpe pulled a goal back in the 73rd minute when Ben El-Mhanni received the ball just inside the area and pushed forward with the ball before striking a shot that took a deflection and beat Logan before nestling into the left corner of the net.

A minute later, the ball broke for Ojo on the edge of the area and his drive was saved by Logan, diving down low to his right.

Sensing the opportunity to get an equaliser, Scunthorpe carried on pressing forward and the ball almost broke for Dales, but a Stags player got back just to stop him getting through.

With eight minutes remaining, the ball landed invitingly at the feet of Humphrys from 25 yards. He took aim but struck the ball over the crossbar.

In the 89th minute, Ben El-Mhanni played Dales in and the attacker progressed into the Mansfield box before sending his effort past Logan as Scunthorpe levelled.

However, just seconds later and with the next attack, Timi Elsnik was played in down the right side of the area and clipped his effort beyond an onrushing Flatt. Tom Pugh, making his debut as a substitute, tried to hook the ball away as it was heading over the goal line but he couldn’t prevent it from going in.

The Iron pressed forward late on but couldn’t find another equaliser and exited the competition.

We return to action when we face Bristol Rovers away in League One on Saturday.

The admission price for disabled supporters (with a carer) is based upon their relevant age category. The carer is admitted free of charge.

Young adults must bring ID and may be required to show it on entry.

Coach travel is also available for the encounter. Details are here.

Fans can pay on the gate at the One Call Stadium. Cash-only, with no price increase.

Tickets go off sale from Glanford Park at 12noon on Tuesday, November 13th. 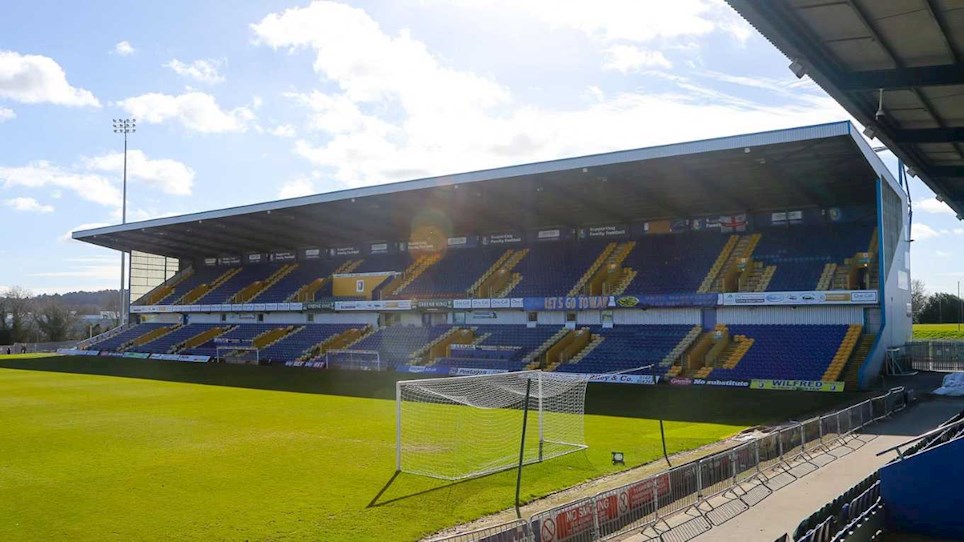 Tickets on sale for Mansfield Town Checkatrade Trophy away clash