The Iron will be looking to stretch their unbeaten record to seven matches in Sky Bet League One when they travel to Oakwell to face high-flying Barnsley on Saturday afternoon (3pm kick-off).

Scunthorpe are currently in fine form, and they will be searching for their sixth win in seven this weekend, while also trying to make it back-to-back victories following on from the 1-0 success against Fleetwood last time out.

Ashley Eastham put the ball through his own net 15 minutes from time to hand the Iron all three points, after a low Levi Sutton cross from the right side caused all sorts of problems for the Fleetwood defence.

Meanwhile, Barnsley were in midweek action and played out a 2-2 draw with Oxford United on Tuesday evening after coming back from two nil down to salvage a point.

Mamadou Thiam and Kieffer Moore notched late in the second half to rescue the away side. That result saw the Tykes’ maintain their own unbeaten run, stretching it to nine games, as they currently sit third in the Sky Bet League One table.

United boss Stuart McCall said left-back Cameron Borthwick-Jackson will be out up to two months with cartilage damage sustained in last week's victory over Fleetwood Town.

However, Lee Novak should be fit although he broke a hand in the victory last weekend. He returned to training on Thursday.

Josh Morris faces a few weeks out with a fractured fibula and strained ankle ligaments. Elsewhere, Jordan Clarke is out for four months (knee), while Ryan Colclough (knee) is out for the remainder of the season.

Lewis Butroid has been struggling with a back spasm, but Tom Pearce could enter the squad after signing on loan from Leeds United for the rest of the season.

The Iron have a decent record against Barnsley in league meetings of late, having not lost against them since 2011 when both teams contested in the Championship.

However, two of the last three fixtures have ended in draws - the last of which, back in August, where a 2-2 was played out between the two sides at Glanford Park. A Josh Morris penalty and a Cameron Burgess header had put Scunthorpe ahead, but Barnsley hit back in the second period to earn a draw, as Kieffer Moore and Dimitri Cavare made sure the points were shared that Saturday afternoon.

English striker Kieffer Moore is in fine form for Barnsley this season and is currently their top scorer with 17 goals in all competitions – eight more than any other player in the squad.

In Sky Bet League One alone, the hitman has 15 goals and two assists, which sees him sit joint second in the race for the golden boot alongside Ian Henderson of Rochdale, as the pair lie just one goal behind John Marquis of Doncaster.

The 26-year-old started his career in the youth academy at Torquay United, before leaving to find first team football with non-league Truro City in the National League South. His goalscoring record then brought the attention of Yeovil Town, after he netted 20 in his first full season in non-league.

After signing a deal with Yeovil in 2013, the striker stayed for two years, making 50 appearances for the club, before he was released. A brief spell in Norway then followed, along with a season at Forest Green Rovers in 2016.

A year later, Moore was signing for Ipswich Town, but got loaned to Rotherham United during his time at Portman Road. After a season with the Tractor Boys’, the forward joined Barnsley, and has attracted attention at Oakwell ever since.

ELSEHWERE IN LEAGUE ONE…

The Iron’s six match unbeaten run has come to an end after losing 2-0 against Barnsley.

Goals from Alex Mowatt and Cameron McGeehan in the first-half sealed all three points for the Tykes at the Oakwell Stadium.

Manager Stuart McCall made two changes to the Iron line-up that beat Fleetwood 1-0 last weekend. Defenders Harrison McGahey and Byron Webster were both handed their first starts since joining in replace of Cameron Borthwick-Jackson and Kyle Wootton.

Barnsley fans thought they had an opening goal inside the first five minutes, but the linesman ruled it offside. The hosts advanced down the left wing with Daniel Pinillos and his cross found Cauley Woodrow inside the area, who put it away after standing in an offside position.

Woodrow then had another chance for Barnsley. This time attacking from the right, Jacob Brown cut the ball back for the forward, whose side-footed effort spun wide of the left post.

Then in the 15th minute, after the Iron had a massive penalty claim at one end not given on Adam Hammill, who nipped in and was hacked down, Barnsley swiftly went up the other end to score and go 1-0 up. Mowatt struck the ball from 25 yards, it caught Jak Alnwick out and went in.

Woodrow had a chance to double his side’s lead not long after when his effort went wide. From the resulting Iron attack, Woodrow was then shown a yellow card for a poorly timed challenge on James Perch.

Perch himself was then booked in the 34th minute, but United defended the free-kick well.

The hosts did get their second goal in the 40th minute. A long range strike was deflected into the path of former Iron loanee McGeehan, who headed the ball into the bottom left corner.

Looking for a quick response, Scunthorpe had a great opportunity. Tony McMahon whipped a dangerous corner into the area and running onto it was Webster, but his header was held by Adam Davies in the Barnsley net.

In stoppage time of the first-half, Davies was called into action again and produced an impressive stop. The ball was dinked over the top for Funso Ojo, who chased the ball down and delicately crossed to Lee Novak, whose close range flick was tipped over the bar.

McCall looked to change things up at half-time when Levi Sutton was brought on for Perch, before Kevin van Veen replaced Hammill in the 58th minute.

However, Barnsley continued to press forward, with both Rory McArdle and Webster making strong, vital blocks to deny a couple of shots.

Cameron Burgess then made an excellent tackle when Barnsley looked to play Kieffer Moore through. The striker ran onto the ball, but the Iron defender managed to poke it off him before he would have gone one-on-one with Alnwick.

McGeehan, attempting to score his second, then met a half clearance on the half-volley, which he drove just wide of the left post.

In the 69th minute, McMahon came forward and crossed from the right-hand side. The ball went back to the right-back, who looped a volley over.

McMahon was involved in the Iron’s next attack, meeting a deep cross sent in from McGahey. He had snuck in at the back post, but was flagged offside as his attempt crashed off the post.

With the clock running down, Barnsley substitute Mike Bahre attempted an acrobat effort. He controlled a cross with his back to goal and hit an overhead kick straight at Alnwick.

In the remaining three minutes, Novak was presented with an opportunity, but the cross from McMahon was just too high, with the striker glancing a header wide.

Scunthorpe will look to bounce back next weekend at Glanford Park when Accrington Stanley are the visitors.

Fans are able to pay on the day for the Iron’s away trip to Barnsley on Saturday, February 2nd (3pm kick-off).

Those aged 19 and over CAN pay on the gate on Saturday.

*We were originally told Juvenile 12-18 and Juvenile Under 12 tickets must be purchased in advance and would not be available on the day of the game. However, we have since been informed that Under-18s without tickets are able to attend, though MUST purchase a ticket from the Oakwell Box Office before heading for the turnstiles. 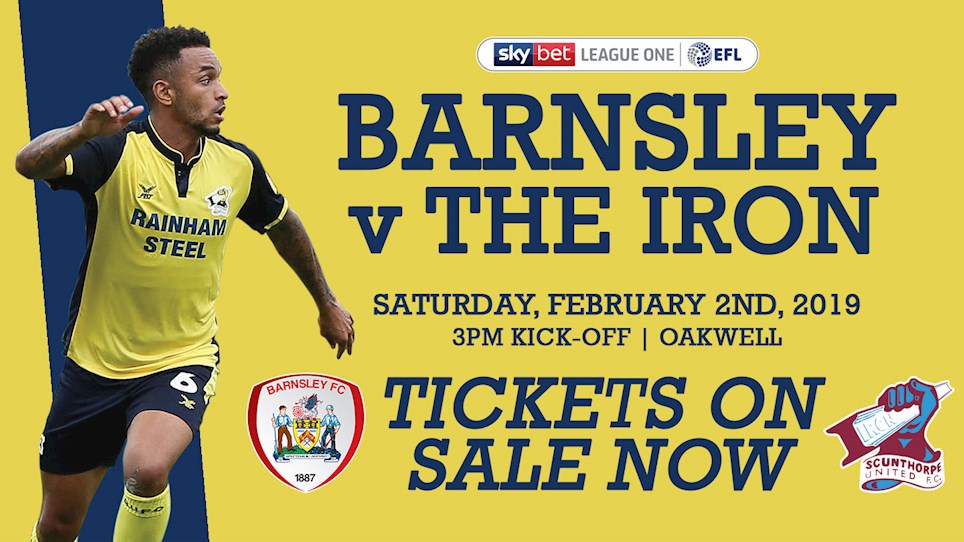 
Tickets are on sale for the Iron’s away trip to Barnsley on Saturday, February 2nd (3pm kick-off). 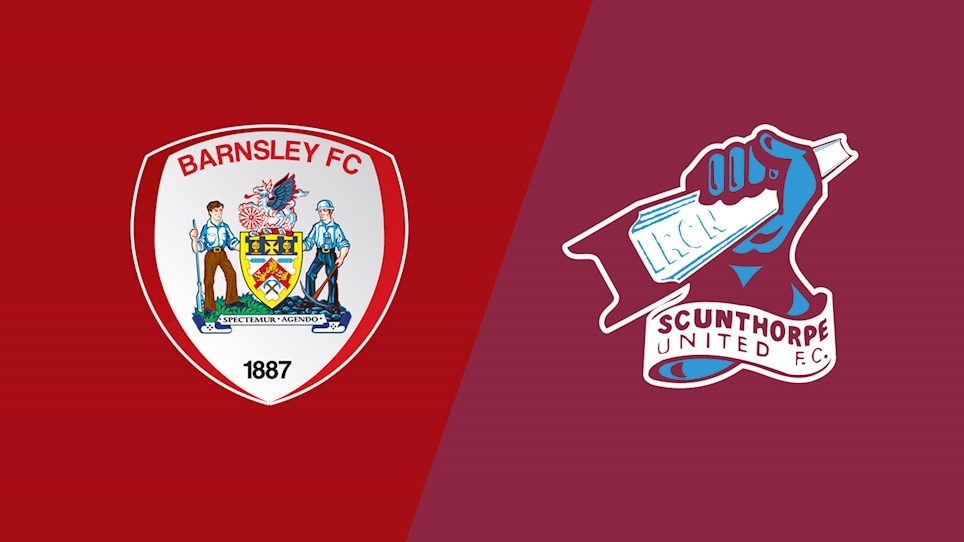 
Tickets have gone on sale for the Iron’s away trip to Barnsley on Saturday, February 2nd (3pm kick-off).