The Iron are in Emirates FA Cup action on Sunday when they make the sho trip to the Keepmoat Stadium to face Doncaster Rovers (kick-off 2.00pm). 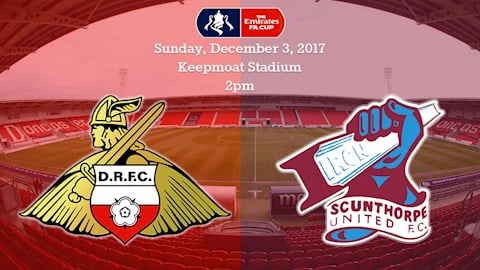 Fans can pay on the day at Doncaster

Manager Graham Alexander will be hoping his side can continue their fine run of form and progress into the third round of the competition.

TEAM NEWS…
The Iron will be without right-back Jordan Clarke who was forced off with a hamstring injury in the first-half of the Charlton game last Saturday. He will be out for the next fortnight at least, while Lee Novak (ankle) will also be out for two weeks after limping off injured at Bradford City.

Striker Simon Church is nearing a return to the team and could be involved on Sunday afternoon.

PAST MEETINGS…
The two sides have already met twice this season in Doncaster, with the Iron first recording a 1-0 victory in the league, when Lee Novak bagged his first goal for the club.

In the Checkatrade Trophy, Clayton Lewis scored on his debut as the teams played out a 1-1 draw, but Darren Ferguson’s side gained the extra point by winning the penalty shootout.

ONE TO WATCH…
Club legend James Coppinger is still an important player in the Rovers side at the age of 36.

The midfielder has played in over 500 games for Doncaster and has scored 62 goals.

Before joining the South Yorkshire side in 2004, he featured in one Newcastle United game and spent a couple of years at Exeter City.

The Iron lost 3-0 to Doncaster Rovers at the Keepmoat Stadium in the second round of the Emirates FA Cup.

A brace from Rovers’ midfielder Tommy Rowe and a late strike from Liam Mandeville ensured that the home side progressed to the third round of the competition.

Manager Graham Alexander made three changes to his starting 11 for the match, which saw Andrew Crofts, Josh Morris and Duane Holmes all start for the Iron.

In the fifth minute, Doncaster began asking questions of the Scunthorpe defence. A well taken corner was parried by Matt Gilks, with the loose ball falling to Josh Marquis but he stabbed his effort over the bar from inside the six-yard box.

Marquis then found space in the box again not long after. He swivelled and hit the ball first time with his left foot, however his strike went straight into Gilks’ hands.

Rovers did find the back of the net in the 16th minute and took a 1-0 lead. Holmes passed back to Gilks, who had his clearance charged down by Rowe and the Doncaster player controlled the ball before he slotted it into the right corner of the goal.

The Iron’s first big chance fell to Paddy Madden. Holmes’ long throw-in dropped at the striker’s feet, who turned to shoot, but his attempt was blocked.

In the 34th minute, Madden had another slight opportunity, following a low cross from Murray Wallace. The Irishman darted in front of his marker and touched the ball wide of the right post.

The Iron were then presented with a fantastic opportunity. Morris was played through on the left wing, sliding a cross into the area, which travelled through to Holmes. He cut onto his left foot and his strike went beyond the goalkeeper, but was cleared off the line by a Doncaster defender.

In additional time of the first half, Wallace looped a ball in behind the Iron defence for Tom Hopper and Adelakun to run on to. Hopper nodded it down for the winger, who drilled a half volley just past the left post.

The first chance of the second 45 minutes went United’s way. Morris dribbled in behind the Doncaster defence and drilled a shot goalwards for Ian Lawlor to parry away.

Trying to replicate his stunning free-kick goal last weekend, Morris curled a set-piece effort towards the net from the right-hand side, but the goalkeeper brought the ball into his chest.

However, Doncaster managed to double their advantage in the 67th minute, and it was Rowe who netted again. He picked up the ball and powered his way into the Iron box, before smashing his strike across the goal into the bottom left corner of the net.

In the 80th minute, Gilks made a smart, low stop to deny Marquis, who had taken the ball into the box.

The Iron nearly got a goal back moments later. They took a corner with the ball dropping for substitute Charlie Goode, seeing his low effort saved by the feet of Lawlor.

Another Doncaster attack nearly saw them get their third goal of the game. A neat interchange between James Coppinger and Harry Toffolo on the edge of the box allowed the captain to find space and roll a shot wide of the right post.

However in stoppage time, the home side did grab a third goal. Coppinger played through Mandeville and the substitute drilled his effort past Gilks to make it 3-0.

Alexander’s side couldn’t find a way back into the game, and have therefore been knocked out of the FA Cup.

The Iron’s FA Cup second round match away at Doncaster Rovers will take place on Sunday, December 3rd, 2017 (kick-off 2pm).

Iron fans will be able to pay on the day. To buy tickets they will need to go into the Club Doncaster Academy reception (which is in the North Stand where away fans are) to buy a ticket to then get access via the turnstiles as usual.

1,626 tickets have been sold in advance for the FA Cup second round clash at Doncaster Rovers tomorrow (2pm kick-off). They're now OFF SALE from us. Thanks for buying, and have a safe trip there and back supporting us. 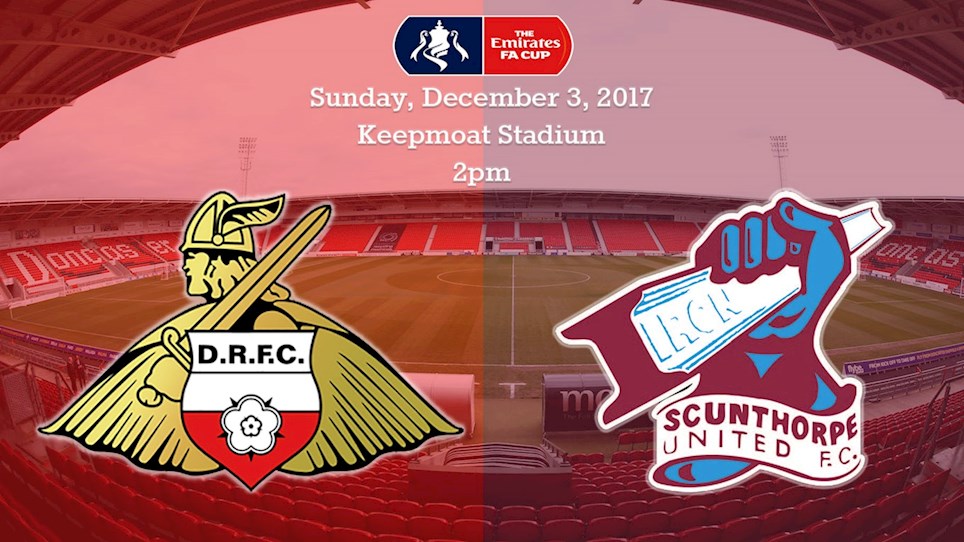 Tickets on sale for Doncaster FA Cup second round clash


The Iron’s FA Cup second round match away at Doncaster Rovers will take place on Sunday, December 3rd, 2017 (kick-off 2pm).