The Iron travel to the Cherry Red Records Stadium on Saturday to face AFC Wimbledon in Sky Bet League One (3pm kick-off).

Neither team have played since Good Friday as both had Easter Monday fixtures postponed due to waterlogged pitches.

Therefore, Scunthorpe come into this game on the back of their televised 1-1 draw at Oxford United. The Iron looked impressive in the game but are on the hunt for a win that will put them back into the play-off places.

AFC Wimbledon are coming into this fixture on the back of a 1-0 loss to Fleetwood Town and they have a lot to play for. The Wombles are sitting just one place above their rivals MK Dons in the relegation zone.

TEAM NEWS…
There are no fresh injury concerns in the Iron camp. Right-back Marnick Vermijl (hamstring) and striker Lee Novak (heel) have taken part in training again this week after making their returns off the bench against Oxford.

Midfielder Luke Williams (scar tissue injury) missed training on Thursday but only because of illness.

PAST MEETINGS...
The Iron and AFC Wimbledon drew 1-1 at Glanford Park earlier in the season, with Conor Townsend's spectacular opener cancelled out by Jimmy Abdou's effort midway through the second-half.

ONE TO WATCH…
Ex-Iron striker Lyle Taylor has steamed ahead as the Wombles’ top scorer this season, netting 15 times for the League One outfit.

The 28-year-old, who joined the Dons from Scunthorpe in 2015, is AFC Wimbledon’s record EFL goalscorer. However, the striker has also proven that he has an eye for a pass, having set up five goals for his teammates too.

The substitute connected with a cross from Duane Holmes to strike from close range, as Scunthorpe cancelled out Will Nightingale’s early strike.

The Iron made one change ahead of the game, with Neal Bishop coming in for Funso Ojo.

Latching onto a throughball, former Iron striker Lyle Taylor instigated the first attack of the game on four minutes, as Murray Wallace had to get back quickly to take the ball away from his feet. Goalkeeper Matt Gilks gathered the loose ball but was adjudged to have pushed it out of play for a corner.

From the subsequent set-piece, on five minutes, the ball found Nightingale at the far post, whose initial effort was blocked away. A cross from the left-wing was then sent in and the same player headed home the opening goal of the afternoon.

The Dons were in the ascendency at this stage and almost scored again two minutes later when Harry Forrester’s effort from 25 yards took a deflection and cannoned back into play off the crossbar.

The ball was then played back into the box and Dean Parrett converted home from close range, but the Wombles’ celebrations were shortlived as the goal was disallowed as he was ruled offside.

The pressure continued, and Taylor chased a lost cause down the left flank before stopping the ball from going out play and cutting inside, but his low shot was easily gathered by Gilks.

In the 21stminute, the away team had their first corner of the afternoon as Jordan Clarke’s cross was deflected behind. Rory McArdle got on the end of Hakeeb Adelakun’s delivery, after Josh Morris had played a short corner, and knocked the ball down, and United tried to scramble the ball in but the hosts managed to get it clear.

A good spell of United possession followed, with Bishop almost playing in Ivan Toney but home goalkeeper George Long was quick to gather. Then, Adelakun tried to play Clarke in down the right, but the ball just had too much pace on it and went out for a goal kick. With 28 minutes on the clock, Holmes played the ball to Morris. The left-footed midfielder tried to unleash a trademark strike from outside the area but it was blocked away by a Wimbledon defender.

Two minutes later, Holmes took a free-kick quickly to Ryan Yates, who sent a lobbed pass towards Toney, but the striker’s flicked header was easily gathered by the goalkeeper.

The hosts continued to threaten too and, on 32 minutes, Forrester sent an angled half-volleyed effort wide at the near post from the left side of the area.

Parrett received the ball just inside the Iron half of the field and advanced goalwards before drilling a powerful drive just wide of Gilks’ left-hand post on 38 minutes.

In the 44th minute, the ball was played long to Taylor, who held it up well and played it off to ex-Iron midfielder Liam Trotter, but he stabbed his effort over the crossbar for the last chance of the half.

Straight after the break, Scunthorpe looked to get back into the game as Bishop played a nice ball wide to Holmes. He controlled it and ran into the area, but a Wimbledon defender shielded it out for a goal kick.

It was a quiet opening to the second period, with chances at a premium, until the 59th minute when Conor Townsend received the ball down the left and played it into Toney. The ball was passed to Bishop who tried to thread it into the area before it was cleared, eventually reaching Clarke, whose left-footed strike from 25 yards drew a good stop from home shotstopper Long.

The first change of the afternoon was made in the 61st minute, as Cameron McGeehan came on for Adelakun.

On the 65-minute mark, Parrett fired a free-kick from the left side high and wide for the hosts as they looked for a second.

The 68th minute saw United attack as Bishop played Townsend in down the left, his deep cross evaded everyone at the back post though and went out for a goal kick. A minute later, the Iron went forward again but Morris’ speculative ball into the area was gathered by Long. Then, Holmes tried to find an Iron head with a cross from the left but the Wombles goalkeeper got on the end of it and caught again.

With 19 minutes remaining, Novak came on for Toney as United made another alteration. He almost made an instant impression too, as Holmes got on the end of his knockdown on the edge of the area and tried to find an angle to shoot before striking over the crossbar from 20 yards.

United’s leveller came in the 84th minute, Wallace threaded a superb ball down the left flank for Holmes. The Iron winger advanced forward and sent in a perfect cross for substitute Novak to fire home from inside the penalty area and restore parity with his sixth goal of the season for Scunthorpe.

Three minutes later, Bishop played a superb ball to Townsend, who brilliantly brought it under control and sent it into the danger zone again before it was deflected away for a corner.

In the 88th minute, United continued to threaten and Clarke sent a cross into the box from the right side of the area which McGeehan tried to get on the end of but the Wombles saw out for a goal kick.

A minute later, attacking the away fans, Clarke was found in space again down the right flank and his shot was deflected wide for a corner. From Morris’ subsequent set-piece, the ball narrowly missed a number of Iron players at the back post and drifted wide.

Hopper replaced Morris moments later as Nick Daws’ side searched for the winner.

There were six minutes of stoppage time and the next Scunthorpe chance came in the second of those as Wallace almost connected with a Townsend free-kick from the right, which took a deflection and went out for a corner. However, nothing came from the set-piece.

Two minutes later, Wallace brought down Taylor on the edge of the area and a free-kick was rewarded. Lloyd Sam took the set-piece, which reached Taylor, who knocked the ball across for ex-Iron Andy Barcham to score, but it was disallowed for offside.

It proved the last chance of the game as the scores ended level.

Scunthorpe return to action next Saturday when they make the trip to take on Charlton Athletic (3pm kick-off).

AFC Wimbledon have confirmed Iron fans can pay on the gate, CASH-ONLY, for the standing terrace area only for the game on Saturday. There is no price increase on the day.

Prices for the match are as follows: 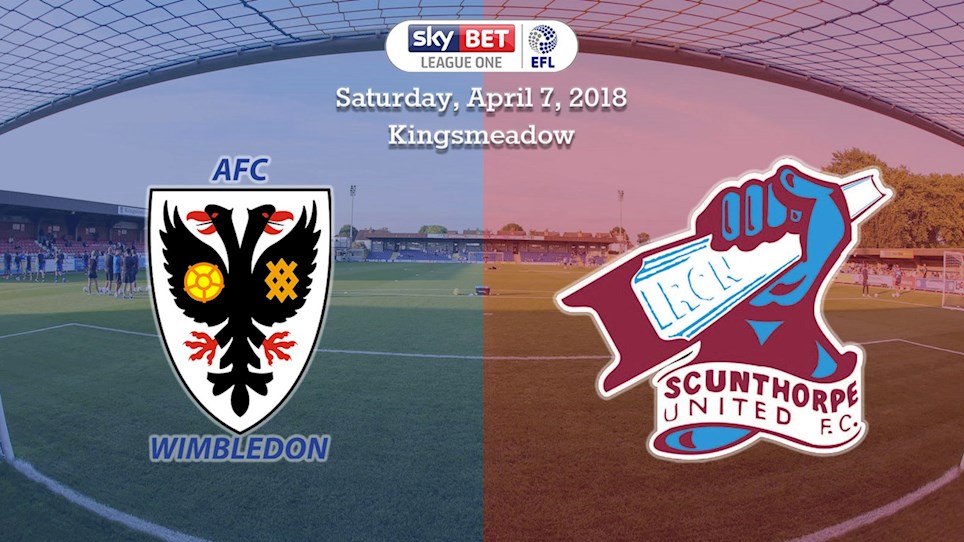 Tickets on sale for trip to AFC Wimbledon


Tickets have gone on sale for the Iron’s League One trip to face AFC Wimbledon on Saturday, April 7th.