Just 25 days after joining the Iron on loan from Bolton Wanderers until the end of the season, defender George Taft was delighted to make that move permanent. 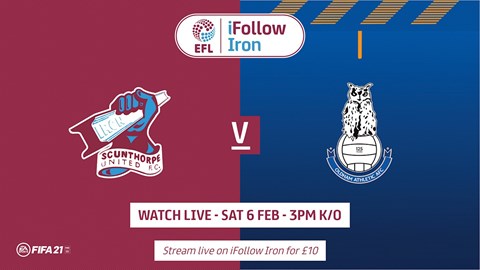 The 27-year-old penned a two-and-a-half year deal with the club on Deadline Day following a week of negotiations between the two clubs and the player to change the loan into a transfer.

“It’s amazing and I’m so happy to get it done,” he said, speaking to iFollow Iron.

“I’ve not been here that long, but it is good to make it a permanent move. I came in quite quickly and there was meant to be a game that weekend, but I got a bit of time with the lads and it’s a great group. They made me very welcome, so it has been easy to settle in.

“It’s been over the last week or so, and it’s just been the usual process of getting Bolton, Scunthorpe and myself to agree on terms, which we did.”

Taft has played five games for the club during his time so far, with the Iron conceding just twice and keeping clean sheets in the last three matches.

Contrasting that to the same amount of appearances for the Trotters in his four-month stay there, Taft definitely feels this is the right place to be to further his career.

“I think I’ve shown what I can do and my fitness levels have gone up quickly in those games,” he continued.

“We’ve done well in the games as a team. I’ve enjoyed my time that much, I’ve seen the progress within the team and training with the lads here, so it made it an easy decision.

“I still had another year (on my contract at Bolton), but obviously I didn’t get the game time that I would have liked. It’s a shame that I didn’t get to play in front of the fans there, but I was proud to put the shirt on there and I’ll do the same here.”

Focusing straight back to footballing matters, the central defender is eager to build on the maximum points that the side achieved from three games last week to leapfrog his now former club in the league table.

Adding to his earlier comments, Taft believes that week has to just be the start: “We’ve got to build on the last week. We had such a positive week with three games in quick succession and we did so well. We’ve got to build on it and take it into the rest of the season.

“It was a tough week, but we’ve had a rest over the weekend and we’re back on the training pitch now, getting ready for Saturday.”

See much more from George Taft on iFollow Iron.