Leyton Matthews was our third member to get the chance to take part, with the then-10-year-old featured in the new-look Junior Iron Mini Mag for our younger supporters. He also got the opportunity to interview defender Andy Butler, asking him his choice of questions.

This interview was featured in our programme when we faced Carlisle United back in August.

Age? Ten
What's been the best part of being a JIC member? The group makes you feel part of Scunthorpe United.
How long have you been supporting the Iron? I have supported the Iron since I was six-years old and starting to enjoy football.
Tell us about your first game. My first game was on Boxing Day in 2014 when we won 2-1 against Rochdale. My auntie and uncle took me to my first game as a birthday treat.
Who is your favourite Scunthorpe United player of all time? Duane Holmes - I wish he would come back.
Who is your favourite current Scunthorpe United player? My favourite player in the squad now is Rory Watson. He always plays well and he saved the game for us against Crawley last time out.
Tell us your favourite parts of a matchday… I love matchdays because I go with my best friend and we always get involved. We have been mascots and done the half-time triathlon, which makes us feel like a Scunthorpe player.
Who do you come to games with? I come to games with my best friend Oliver. His mum (my second mum), Emma, usually takes us but when Oliver’s dad Kev is at home he sometimes takes us too.
Do you play football and if so, who for and what position do you play? I play for Broughton Ravers Under-11s on the left-wing.
Which game are you most looking forward to this season and why? I am looking forward Scunthorpe playing Salford City because I am also a supporter of Manchester United and some of my football idols own the club.

When you retire from football will you stay in the sport by refereeing, as you are already qualified? I've still kept my referee's license, but after football I'm probably looking more like going towards coaching. I coach the Under-14s at Doncaster at the moment but refereeing is still a possibility, however it's too difficult at the moment to progress as quickly as I'd want to. It would take me a long time to get into the EFL.

Which team have you played for for the longest? Scunthorpe altogether, if you start from my apprenticeship. I played most games for Doncaster, but the longest time would be Scunthorpe.

Do you have a goal that you will always remember scoring? My first goal against Donny here when we drew 2-2 (in 2004), but also my goal for Walsall against Rochdale. We were 2-0 up at half-time and both going into a relegation battle. They scored three times in the last ten minutes, and if they'd won that they'd have stayed up. Straight from the kick-off, I headed the ball in from 20 yards over the goalkeeper and that sent them down, which was poetic justice because Rochdale released me that season after a trial.

When you were younger, did you ever feel like giving your football dream up? I neve thought I had a football dream to be honest because I didn't play until late on. I played competitively at 13/14 years old. I played with my mates in the park but wasn't part of a team. I enjoyed playing rugby too and did that until I was 16. I never had a dream of playing football, it just came to me because I could head a ball quite a distance. I couldn't get into my school team, and just played in the year above because they had no players. I spent three years with a team eventually though and then got picked up by Scunny.

What is your favourite position to play in? I've played up front a few times at the end of games. I enjoy defending and seeing the whole picture, but everyone's dream is to be a striker just to score goals. 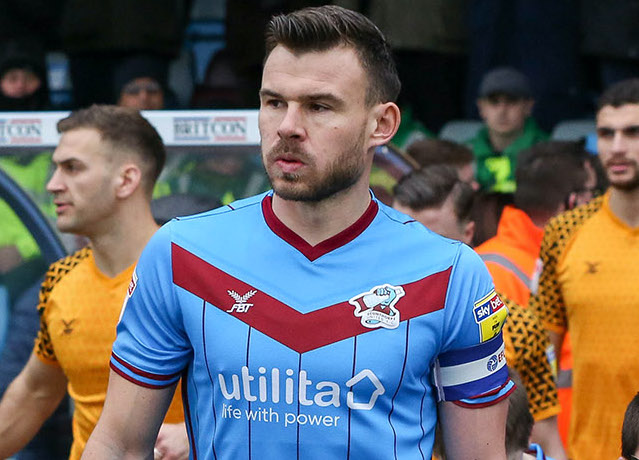 You can still sign up to be a member of the Junior Iron Club!

All of this is available for just £20 annual membership for the 2019/20 season. Parents can sign their children up now by visiting www.sufctickets.com or call in to the ticket office and complete the application form.

For further information, or if you have any questions, email sufctickets@scunthorpe-united.co.uk or call 01724 747670.