United will be seeking to bounce back from a derby day setback by making it three home wins out of four games when Mansfield Town head to North Lincolnshire on Boxing Day (1pm kick-off). 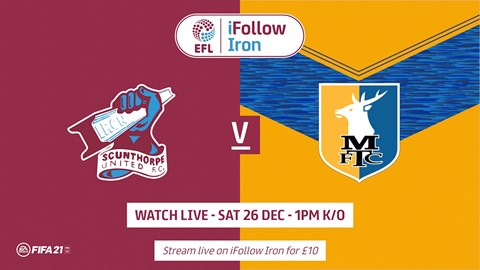 The Iron were beaten 1-0 by near neighbours Grimsby Town last weekend and will be looking for a reaction against Nigel Clough's Stags.

We come into the match sitting 1th in the League Two table, with a victory this weekend providing the opportunity to potentially climb up a place.

Our last home game was against Barrow on Tuesday, December 15th and saw Abo Eisa and Jordan Clarke on target in a 2-1 Iron win.

Mansfield sit three points behind us in 20th place and will be seeking a first win since December 2nd, when they were 1-0 victors at Cambridge United.

They have three joint top scorers, with four goals to their name, in Harry Charsley, George Lapslie and Nicky Maynard, while goalkeeper Marek Stech and centre-back Farrend Rawson top the appearance tables for them with 18 starts to their name in the league.

Former Iron James Perch has made 14 appearances in all competitions since signing in the summer.

The two sides met in the group stages of the Papa John's Trophy earlier in the season, with Olufela Olomola on target in an eventual 2-1 defeat.