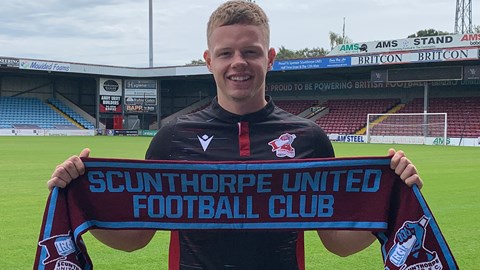 "I spoke to Jacob and he sold it to me really well, saying how nice it is here and it was a no brainer for me really," he told iFollow Iron.

The 21-year-old signed a one-year deal and explained the type of striker that he is, saying: "I'd say I'm a typical 'Number 9' type of striker who likes to do a bit of everything - hold-up play, getting in behind and overall just scoring goals."

The son of Watford legend Tommy Mooney, he continued: "I'd like to think of myself as my own player, but I've taken a few things from him and will try and do what I can. The target ultimately is to score goals and get promoted."

Mooney has experience of League Two from a loan spell at Cheltenham Town the season before last, and he feels well equipped to make an impact in the division following a successful spell of playing men's football at Hereford United last season.

He explained: "I was at Villa for 12 years and joined them when I was eight. I had a loan spell at Cheltenham, and did okay. I enjoyed my time there, and had different managers, but I enjoyed the division and thought I could cope well. This was when I was younger as well and hadn't played as much men's football, so I'm hoping to thrive this season.

"I left Villa two years ago and had a tough year, but I ended up at Hereford in non-league and did well there, and that's what's brought this opportunity up.

"I think I can fit in well here and the aim is to carry on scoring goals and see where we can get to. I've tried to do what I can during lockdown but I'm buzzing to get back going."