While he knows there are much bigger issues going on in the world at present, on-loan Nottingham Forest man Jordan Gabriel has spoken about the mild frustration of having his stay with the Iron cut short for now while football is suspended due to the COVID-19 outbreak. 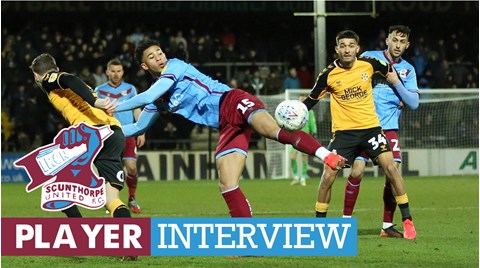 The defender had played nine games since joining in January and has been in impressive form in the right-back slot.

He explained: “It’s really hard not being able do the thing you love really. There’s no live football to watch either and it’s been a case of looking at old football matches and training sessions I’ve had.

“It’s been difficult but I’ve got to take in what I’ve learnt through being at Scunthorpe, and I’ve enjoyed it, which is the main thing. I’ve learnt a lot.

“I hope this season carries on but if it doesn’t, I’ll at least be able to go back to Forest and put into play what I’ve learned from this time at Scunthorpe.”

On whether his loan could be extended should the season resume after it was due to expire, the 22-year-old continued: “That’s something the backroom staff will have to agree to, but it’ll be down to both clubs. All we can do is have our fingers crossed and go from there really.”

Talking about what he’s been up during the break from play, he continued: “I’ve had contact with both parties really. I’m following the Scunthorpe training programme, enjoying it and making sure I keep my head in a good place.

“As a player, you have to keep yourself motivated because you never know how long this is going to last for. We have to be ready for whenever that time is for us to kick on again."

"I just hope everyone stays safe, stays at home and enjoys the time they have with their families.

“I hope the season continues because everyone knows it’s unfair on the teams that could potentially go up, and it’s not fair on the teams who could go down. I know a lot of clubs are losing money on this but I really want the season to go ahead, so I can hopefully continue my time at Scunthorpe."