The Iron's club mascot, Scunny Bunny, has been recognised with a "Mini Award" at the Family Excellence Awards held at Villa Park, the home of Aston Villa. 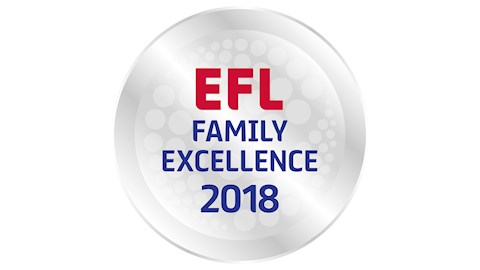 Two weeks ago, it was announced that the club had retained its Family Excellence status for 2018, following a number of brilliant reports for United throughout the campaign.

On the day, founder of the Fan Experience Company, Mark Bradley spoke of the club's use of Scunny Bunny and also highlighted the work that the Iron do in terms of pre-match tours, grassroots football opportunities and more.

The award, "making the most of your mascot" highlights the work done on a matchday and at other events in engaging with our young fan base.

The Iron were ranked as third in the division for Family Excellence over the course of the season and 13th out of the 72 EFL clubs (scoring an average of 8.7 out of 10 over a number of touchpoints), which is a massive achievement considering the club's facilities.

An extract from United's summary report: "Scunthorpe's evolution as one of the EFL's most family friendly clubs was clearly evident on their experienced assessor visit and, from the subsequent family experience, it's clear the club have continued to improve and enhance their offering. What's so impressive about the club is the way they have made family engagement part of their culture: evident in the way individual staff members went the 'extra mile' for the family; the quality of personal and general communications and the macot's (and players') keenness to engage with kids and make their day."